Spain: Unpublished self.criticism of the Basque left about ETA violence 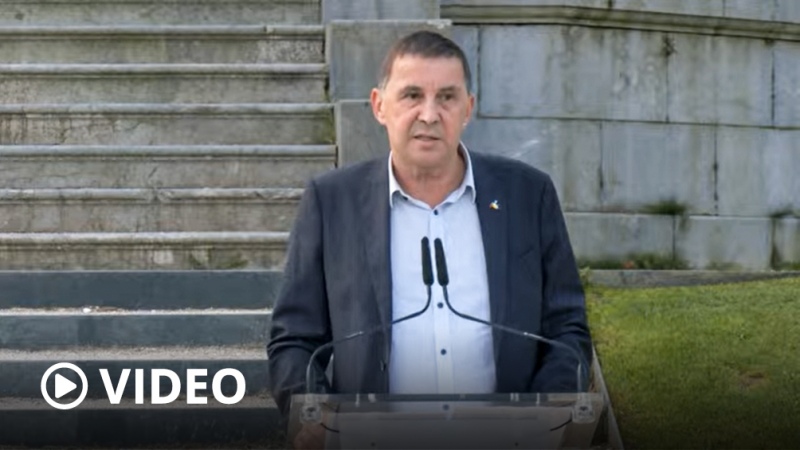 The statement with the recognition was read in the Aiete palace, in the city of San Sebastián, where an international peace conference was held 10 years ago.

The general coordinator of the Basque independence formation EH Bildu, Arnaldo Otegi, made an unprecedented acknowledgment of the pain caused to his victims by the armed action of the separatist group ETA, coinciding with the 10 years since the definitive cessation of violence by the organization. .

“We feel their pain, and from that sincere feeling we affirm that it should never have occurred”said the leader of the so-called abertzale left (“patriot” in the Basque language), quoted by the AFP news agency.

Together with Arkaitz Rodrguez, General Secretary of Sortu, the ideologically ascribed formation to the current of Basque nationalism, the former independence leaders sought “transfer to them that we feel their pain” and they affirmed that the armed action “should never have occurred”.

The “solemn declaration”, with five points and entitled Declaration of October 18, was read first in Euskera (Basque language) by Rodrguez and later by Otegi in Castilian.

“Nobody can satisfy that that happened. It shouldn’t have lasted so long. We should have reached Aiete earlier (in reference to the announcement of the end of ETA’s armed action in 2011).

The statement was read at the Aiete palace, in the Basque city of San Sebastián, in northern Spain, where 10 years ago an international peace conference was held, which was the prelude to the statement by which the ETA militants announced the definitive cessation of their five decades of armed actions.

The indito “mea culpa” of the Basque independence left It was welcomed by the parties that make up the Government alliance in Spain, the Socialist Party (PSOE) and United We Can (UP), but caused rejection in the right-wing Popular Party (PP).

This recognition has been the main demand that the rest of the political formations and leaders, such as the President of the Government, Pedro Snchez, and the Lehendakari (President of the Basque Government), Iigo Urkullu, have made to EH Bildu.

In the text, Otegi and Rodríguez They also demanded the end of the dispersal of ETA prisoners in the prisons of Spanish territory and their approach to Basque prisons.

“It is necessary to give a solution to the question of political prisoners”, began by saying the independence leader, who advocated “to put an end to the exceptional penitentiary policy and to give it a comprehensive solution”, since, as a record, “without them it would not have been possible”, in reference to the achievement of peace.

In addition, he insisted on the idea of ​​recognition of the Basque nation: “We still have a pending issue with the resolution of the causes of the conflict,” he said, after which he added that “We are a people, a nation, which as such must be respected and recognized”, he concluded, review the Sputnik news agency.

The PSOE and UP positively valued EH Bildu’s gesture.“We believe it is an important step, a turning point and a very good way for the Abertzale left to remember the 10 years since the end of ETA “, said in a press conference offered in Madrid the secretary of Democratic Memory of the PSOE, Patxi Lpez, who was head of the Government of the Basque Country between 2009 and 2012.

López valued the position taken by the Basque left as “an advance” because “for the first time the nationalist left recognizes that the violence was a mistake and that it should never have occurred or caused.”

“When you know what it costs to take a step like this in that world, you value positively that recognition that the Democrats have been demanding for years,” said López.

In the same sense, Isa Serra, spokesperson for UP, said that “the statement is progress because it follows the path that society started ten years ago.”

Likewise, Ione Belarra, Minister of Social Rights (and Secretary General of UP) valued EH Bildu’s gesture as “an unprecedented step” that, in her view, should be recognized by all Democrats.

Former Vice President Pablo Iglesias welcomed the recognition that he considered “a very important step” and he said that “recognizing it is a matter of justice and a sense of state.”

On the other hand, voices of condemnation emerged from the opposition PP (right).The deputy secretary of organization of the PP, Ana Beltrn, led the way, in a message posted on Twitter. “Special and specific mention for Otegi: feeling the pain of the victims is incompatible with presenting terrorists as heroes and defending impunity for unsolved murders. You are a scourge for democracy.”

“Do not feel so much and start by condemning each of the murders that you applaud and help solve the more than 300 ETA crimes pending sentencing“said Mari Mar Blanco, sister of Miguel ngel Blanco, the PP councilor assassinated by ETA in Ermua in 1997, the newspaper La Vanguardia reported.

Meanwhile, ehe far-right party VOX reduced credibility to Otegi’s words and urged him to “collaborate to clarify the more than 300 ETA cases that remain unsolved.” “No one believes it,” Jorge Buxad, MEP and spokesman for the Vox Political Action Committee, said at a press conference.

The leader recalled that at the beginning of November a delegation from the European Parliament traveled to Spain to study precisely this matter. “Let him appear voluntarily before her,” said Buxad, who added that there is part of the pain created by ETA that “is impossible to repair” and he gave the example of the thousands of Basques who “had to leave as a result of the murders, extortion and daily violence.”