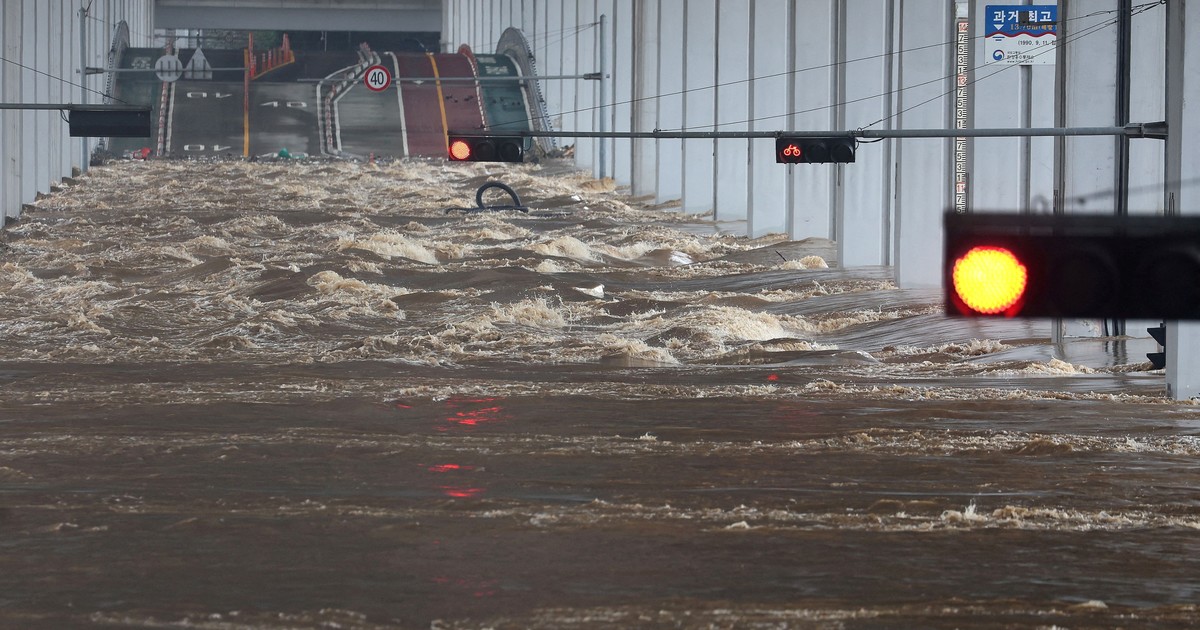 The worst rains in the last 80 years in South Korea left a balance of at least eight dead and six missing and caused significant flooding in the capital, in addition to leading North Korea to declare an alert in the south of the country.

Numerous streets in Seoul woke up this Tuesday with a post-apocalyptic image, after many people abandoned their vehicles on the road the night before to take refuge from the flash floods, which have affected homes, shops and transport infrastructure such as the subway, among others. .

Several areas of Seoul, as well as the port city of Incheon and the province of Gyeonggi, which surround the capital, registered more than 100 millimeters of rain per hour during the night of Monday, reaching 141 millimeters in the Dongjak district, south of the capital, in which it represents the heaviest downpour since 1942.

Five of the deaths occurred in the capital, where four people are still missing while the other three deaths recorded so far took place in Gyeonggi, where there are still two missing due to rainfall, according to the latest details collected by the local Yonhap news agency.

The South Korean president, Yoon Suk-yeol, moved this Tuesday to an apartment in a semi-basement where a family of three died after chairing an emergency meeting to coordinate a response that minimizes the damage in the face of the rains forecast for these days.

Another of those who died in the capital was electrocuted while doing cleaning work after a tree fell due to the rains.

The volume of rainfall accumulated in Seoul at 8 a.m. local time was 442 millimeters, according to the South Korean meteorological agency, which forecasts more rainfall in the region, which could reach 300 millimeters until Thursday.

In neighboring North Korea, state media reported that rain alert declared in the south of the country.

The alert affects the provinces of North Hwanghae and South Hwanghae, some areas in the south of Gangwon province and the city of Kaesong, which borders South Korea, according to information provided by state television KCTV.

The North Korean broadcaster said that between 60 and 80 millimeters of rain are expected in those regions.

the state newspaper Rodong Sinmun For his part, he published an article on Tuesday talking about the “adverse weather conditions with frequent rains” in the region, with a message from the leader, Kim Jong-un, for farmers, and a call to adopt preventive measures to avoid damage to the crops and others.

The gates of a major dam in the western port city of Nampho are being fitted to prevent overflow of the Taedong River damaging fields, and the country’s mines are also being inspected to prevent flooding and collapse, the paper added.

Pyongyang did not specifically say whether it had suffered any damage or casualties.

The unusual downpours also affected the transportation network in South Korea especially in the capital area and its surroundings.

Eight rail tracks were flooded, causing temporary suspension of several sections of train and subway lines, such as the Seoul Subway Line 4 and the Gyeonggi Line, which connects Seoul and Incheon.

Some 80 road sections across the country, including some on the Olympic and Dongbu expressways, as well as three underground roads and 26 riverside parking lots, were closed for safety reasons.

The authorities have asked caution due to the risk of avalanches in wooded areas due to the softening of the ground.