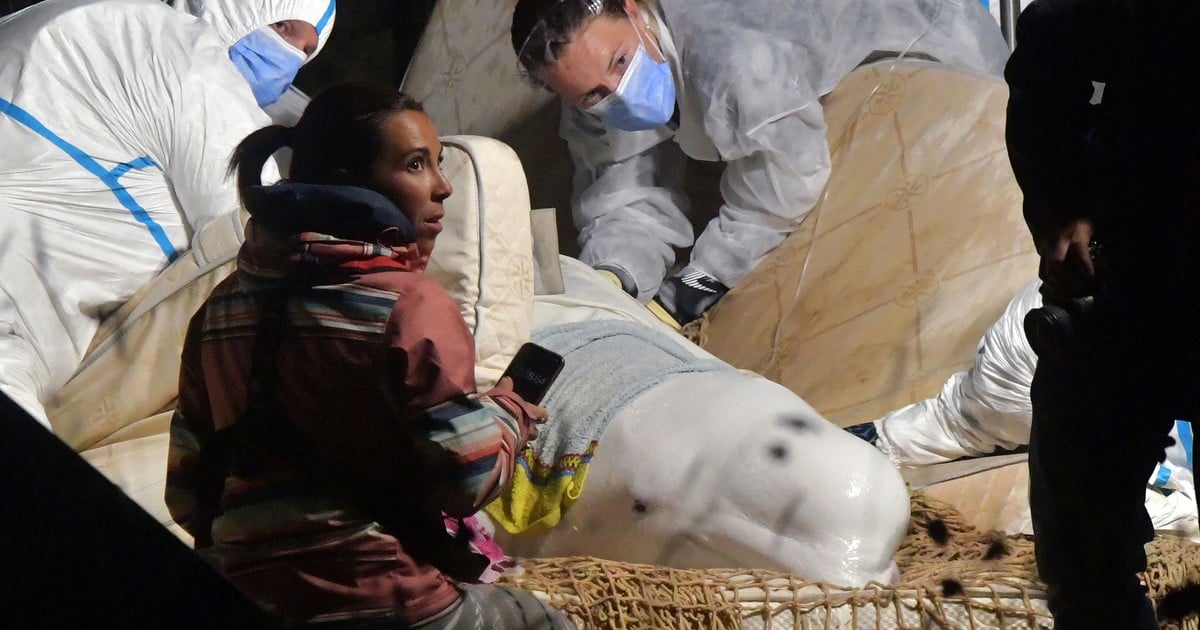 After several days of hard work and much uncertainty, a group of 80 specialists managed to successfully rescue a lost 800 kilo beluga about 70 kilometers from Paris, on the Seine River, and which attracted the attention of all of France. It was the first step of a mission whose main objective is to return the cetacean to the sea.

The animal was lost in a lock in the town of Saint-Pierre-la-Garenne. Accustomed to living in the cold and salty Canadian waters, after entering the river it had stopped feeding which is why the authorities, veterinarians and activists decided to advance the rescue to prevent him from getting even sicker.

In an “alarming” state of health, the beluga was lifted in the net with a crane and placed on a barge, where it received immediate attention from a dozen veterinarians. For several minutes the imposing cetacean was found suspended in the air, waving its white body four meters above the heads of the rescuers.

According to the general secretary of the Eure prefecture, Isabelle Dorliat-Puzet, “the animal must be immediately placed in a refrigerated truck that will transport it to the coast if the tests determine that it can make the trip.”

“We are awaiting the results of the blood test and ultrasound and, depending on the result, ife will decide whether or not it can be transported to the sea“He told a press conference and added that it is “a male who is very underweight and has some injuries.”

Observed on August 2 in the Seine River, the beluga was held since Friday in a lock located 70 km northwest of Paris and about 130 kilometers from the mouth.

“He lost a lot of weight and seems to be sick but his condition is satisfactory,” said Isabelle Brasseur, from the marine animal park Marineland (southern France), the largest in Europe.

How it got there is unknown.Since belugas live in the cold waters of the Arctic and although they descend south in autumn, they never venture that far.

Specialists consider several options to explain these phenomena, such as an excess of noise pollution that disorients them or that they are lost due to changes in sea currents due to global warming.

The situation of the beluga whale generated great interest inside and outside France and several foundations, associations and individuals have made donations to help save it, because the rescue work cost several thousand euros.

If his health permits, he will have to be transferred to Ouistreham, on the Norman coast, where he will remain for three days in a pool of seawater before being released on the high seas and taken out to sea, far from the coast.

Last May, an orca entered the Seine where it spent several days, but died of exhaustion and lack of food before it could be rescued.