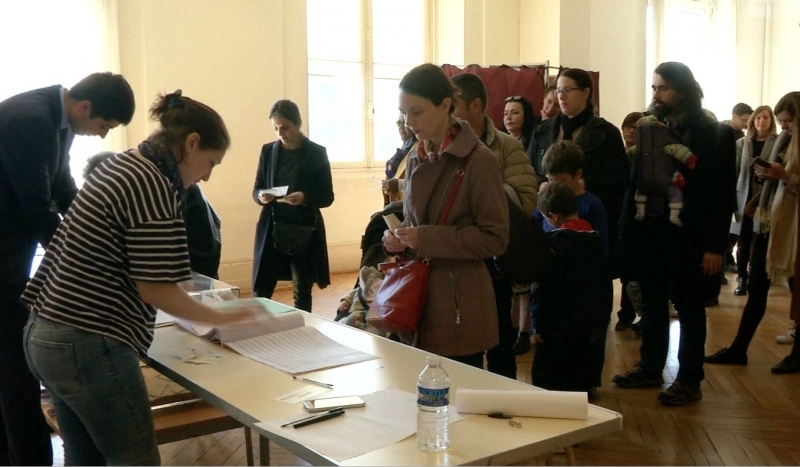 Although the electoral campaign floods the media coverage, it does not arouse interest in 52% of the French.

Six months from presidential elections in France, the country appears politically very fragmented in the polls, which predict a duel in the second round between the president Emmanuel Macron and a candidate from the extreme right, while the campaign invades the media but fails to arouse the interest of the majority of French people.

Macron, who did not officially announce his candidacy but multiplies visits throughout the country, He is the only politician who will reach the second round comfortably next April 24, according to various polls.

Until a few weeks ago, her undisputed rival was the leader of the National Grouping, Marine Le Pen, but the irruption in the journalist’s campaign ric Zemmour, known for his controversial positions on immigration, feminism and French sovereignty, changed the landscape.

Two polls place him in the second round against Macron, while Le Pen’s fall continues to increase, with more than ten percentage points lost since June.

According to polls, Macron is the only politician who will reach the second round comfortably. (Photo: AFP)

Zemmour draws some of Le Pen’s voters, who they do not see her capable of reaching the Presidency after the 2017 defeat to Macron, but also to a section of the conservative electorate, especially those who five years ago had voted for Francois Fillon.

For now the journalist also does not confirm whether to compete in the electionsBut he uses the promotion of his latest book to attend events and raise funds for his association throughout the country, something that analysts interpret as a springboard to launch his eventual candidacy.

“The big question is whether he will be able to obtain the 500 signatures of elected officials necessary to be a candidate,” he alerted Tlam. Anne Jadot, Professor of Political Science at the University of Lorena, in reference to the mandatory requirement to apply.

For the specialist, her possible entry into the campaign “opens the game a little more” because it lowers the access bar to the second round, which until recently was around 25% and now it will go to 16%.

However, it specifies that the current dispersion of candidacies favors Macron for the moment and it hurts mainly the parties of the left.

The mayor of Paris, the socialist Anne Hidalgo; the environmental MEP Yannick Jadot and the deputy from the left Jean-Luc Mlenchon they are the most prominent names of the ten candidates vying for the leadership of this space, which as a whole does not exceed 30% of the voting intentions in the polls.

Although all appeal to unity to reach the Government – no candidate exceeds 10% of the vote – the possibility of a single candidacy is announced complex.

Not so with the conservative party The Republicans, who managed to reunite his political family to celebrate a closed primary on December 4, in which the president of the Altos de Francia region, Xavier Bertrand, the leader of the Parisian region Valrie Pcresse, and the former chief negotiator of the European bloc for Brexit Michel barnier are emerging as favorites.

Although the electoral campaign floods the media coverage, it does not arouse interest in 52% of the French, according to the barometer of the daily Les Echos.

“There is a great lag between the small political-media world that is very excited, even around the Zemmour phenomenon, and a large part of the people who are still a bit far from all that,” said Jadot, who fears that the climate of “permanent campaign” demotivated the electorate.

“People have other concerns, such as purchasing power, rising energy or gasoline prices“, he pointed out.

Precisely, purchasing power (41%) is the greatest concern of the French in the face of the elections, followed by the environment (30%), according to a survey by the Ipsos consultancy published last Friday.

However, the topics most tackled so far in the campaign have been the immigration and the unsafety, which rank third and fourth in said poll, and were imposed by Zemmour and the right-wing candidates.

This “disconnect” between the political-media agenda and the citizen It could affect the level of participation, the expert warned, recalling that something similar happened during the June regional elections, in which almost two-thirds of voters did not go to the polls, in a country where voting is voluntary.

The Republicans were the big winners and Le Pen and Macronism, the big losers of these elections, but it is very rare in France that these results are mechanically transferred to the presidential elections.

“It is likely that next year there will be a very strong abstention and people are right (not to go to vote) if the programs do not address them and their real problems,” Jadot said.

“The ability to mobilize and the level of participation will really be a key element. We must not only look at the distribution of voting intentions, among those who decided to share it. We must look at who will vote,” he concluded.