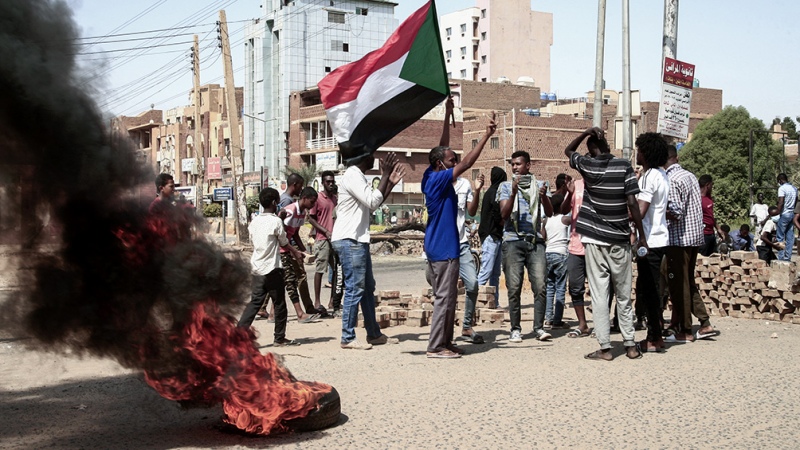 Protests in Khartoum and other cities against last Monday’s coup. (AFP photo).

Sudanese security forces detained three well-known pro-democracy leaders, relatives and other activists reported, amid mounting internal and external pressure for the Army to back down with the recent coup.

The news of the arrests on Tuesday night coincides with a third day followed by protests in Khartoum and other cities against last Monday’s coup, and with the closure of many businesses in the capital following a call for a general strike and disobedience. civil.

The coup threatens to thwart the African country’s difficult transition to democracy, which began in 2019 with the overthrow of President Omar al-Bashir and his Islamist-leaning government in a popular rebellion.

The coup threatens to thwart the African country’s difficult transition to democracy, which began in 2019 with the overthrow of President Omar al-Bashir.”

The seizure of power also occurred after weeks of tensions between military and civil leaders over the march of the transition.

In rejection of the coup, the World Bank (WB) announced today that it has suspended its aid to Sudan.

“The World Bank Group suspended the disbursements of all its operations in Sudan on Monday and stopped processing any new operations while we closely monitor and assess the situation,” said the institution’s president, David Malpass.

“I am very concerned about the recent events in Sudan, and I fear the dramatic impact this may have on the recovery and the social and economic development of the country,” said Malpass, who recently visited Khartoum to meet with the country’s authorities.

Along the same lines, the African Union (AU) suspended Sudan today, a long-awaited measure that the pan-African body takes after the coups in the continent.

The AU Peace and Security Council announced the decision on Twitter and said it would govern “until the effective restoration of the civilian-led Transitional Authority.”

In a statement issued at its headquarters in Nairobi, Kenya, the AU called the coup “unacceptable” and said it constituted an “affront to the shared values ​​and democratic norms of the AU.”

German Foreign Minister Heiko Maas said Tuesday night that the coup was a “catastrophic event” and warned of “severe consequences” for Sudan, which was seeking to rejoin the international community after its isolation for 30 years. Al-Bashir government.

Hamdok, a former UN economist, was arrested along with other officials the same day the Armed Forces seized power.”

After extensive international condemnation, the Army transported deposed Prime Minister Abdalla Hamdok and his wife back to their home Tuesday night.

Hamdok, a former UN economist, was arrested along with other officials on the same day that the Armed Forces seized power.

Embassies in several Western countries said they continued to recognize Hamdok and his cabinet as “the constitutional leaders of the transitional government” of Sudan.

In a joint statement, the embassies of the European Union (EU), the United States, the United Kingdom, France and several other European countries called for the release of all detained officials and the beginning of talks between the Army and the pro-democracy movement.

The head of the armed forces and leader of the coup, General Abdel-Fattah Burhan, promised this week to hold elections, as planned, in July 2023, and to appoint a government of technocrats until then.

Security forces shot down some of the protests and killed at least four people on the same day of the coup.”

But critics doubt that the armed forces want to give up control, noting that the coup came weeks before the planned transfer to civilians of leadership of the highest organ of the transition, the Sovereign Council.

The council is made up of military and civilians but headed by Burhan. Hamdok, for his part, is the leader of the transitional government, which is in charge of the day-to-day running of the country.

The detained activists are Ismail al-Taj, from the Sudanese Professionals Association, a group of unions that led the protests against Al-Bashir; Sediq al-Sadiq al-Mahdi, from one of Sudan’s largest parties, Umma, and brother of Chancellor and party leader Mariam al-Mahdi; and Khalid al-Silaik, a former adviser to the prime minister, said his relatives or activists, the BBC reported.

Security forces shot down some of the protests. (AFP photo).

All three have been open critics of the coup and have called to protest against the armed forces. Tens of thousands of Sudanese have taken to the streets, and a massive march is called for Saturday.

Security forces shot down some of the protests and killed at least four people on the same day of the coup, activists reported. Another 140 have been injured so far.

Al-Silaik was detained shortly after giving an interview to the Arab TV channel Al Jazeera, said his wife, Marwa Kamel.

“What General Burhan did is a coup … the people will respond,” he warned in the interview.On Monday, Burhan dissolved the Sovereign Council and the transitional government and declared a state of siege.

He said that the coup was made necessary by the continuous fights between the different political sectors and to avoid a civil war.