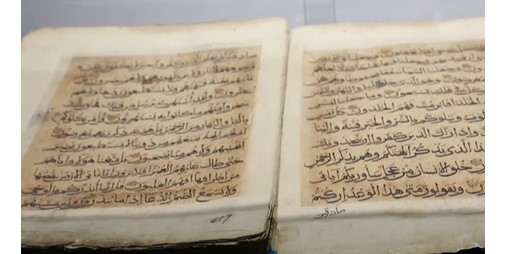 The Jihezi Mosque in Xunhua Salar Autonomous Prefecture in northwest China’s Qinghai Province preserves the oldest manuscript of the Holy Qur’an found in China so far, which is also one of the oldest Qur’an manuscripts in the world.

Studies of academics and researchers indicated that the history of this copy of the Holy Qur’an written in the muhaqqaq script dates back to between the eighth and thirteenth centuries AD, and was brought to China by the ancestors of the Salar nationalism who migrated from Central Asia about 800 years ago and settled in the province.

The cover of this 867-page Qur’an manuscript, divided into 30 volumes, is made of rhinoceros leather, with each volume bound in blue silk.

Han Ye Se-ha, director of the mosque’s management committee, said the aforementioned manuscript testifies not only to the history of Salar nationalism, but also to the history of cultural exchange between China and the regions of Central Asia and the Middle East as well.

In 2007, China allocated funds and organized Chinese expert paper restoration specialists to carry out the restoration of this manuscript. In 2009, this copy of the Noble Qur’an was included in the list of “National Precious Ancient Works,” and a special museum was established for it in the “Jihtsi” mosque in the same year, where the Qur’anic copy was placed in a special glass cabinet with a control system for the level of oxygen, temperature and humidity. to save them.

The aforementioned mosque also displays several copies of the Noble Qur’an that were later written and printed in the province, many of which are characterized by the characteristics of traditional Chinese calligraphy.

Salar ethnic group represents 60 percent of the population of Xunhua County, located in eastern Qinghai Province, and most of them believe in the religion of Islam. Nationalities of the Chinese Nation.

A delegation of Arab ambassadors and diplomats to China visited the aforementioned mosque and viewed the manuscript during their visit to the province in October last year.