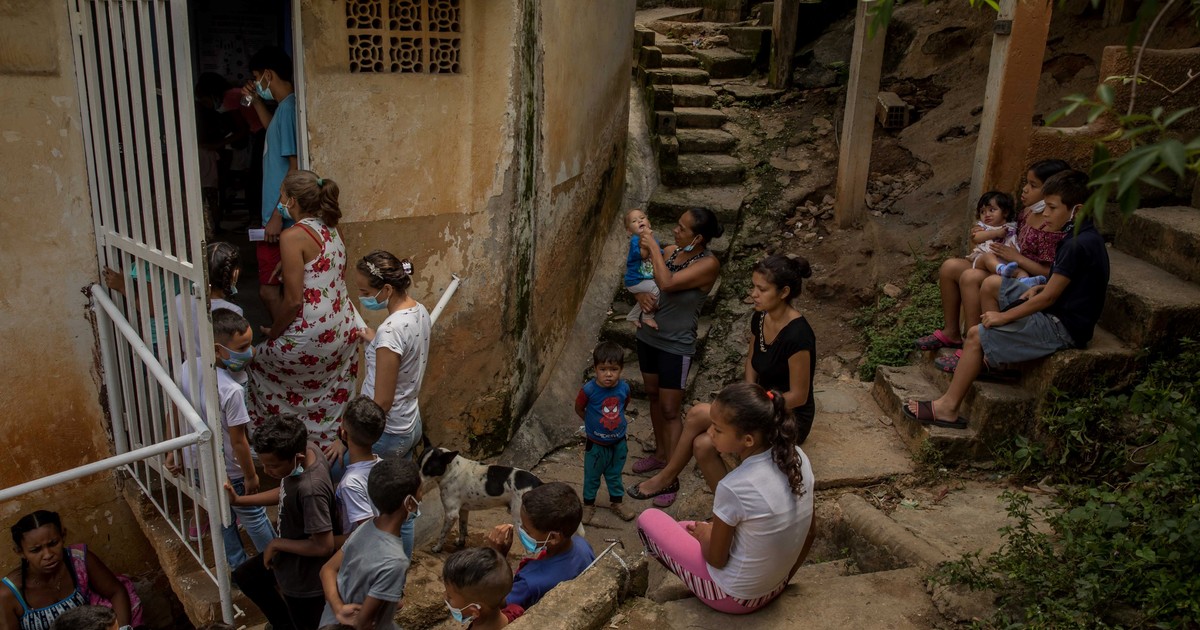 Irianny and her young kid are underweight. Given that she makes less than $100 a month as a practicing instructor, she is unable to give her family a healthy food. She visits a free dining room because there are many needs there and the economic recovery of Venezuela is not yet apparent.

The youngster, who is under two years old, has been a participant in a humanitarian assistance program sponsored by the NGO Caritas for months. When he first enrolled, he displayed indicators of malnutrition, which were later found in the mother, who also has a six-month-old infant.

The 36-year-old woman expresses her gratitude profusely for the assistance she receives, which she views as an integral part of her life.

She requests that soup kitchens like the one she frequents in a Caracas area be expanded despite the fact that this Friday is World Humanitarian Aid Day because “many” people still require this support.

According to the humanitarian response plan the UN released this week, at least 5.2 million Venezuelans, like Irianny, have urgent needs. The UN requested around 800 million dollars from international donors to fund these aid initiatives in the nation.

The demand, which is based on an increase in perceived necessities, raises a reality similar to that of the economic recovery announced by Nicolas Maduro’s government.

In a speech on Wednesday, Maduro proclaimed that “there are banks in the world, Bank of America, Credit Suisse, Chase Manhattan Bank, and ECLAC (Economic Commission for Latin America and the Caribbean) that declare that Venezuela is likely to expand between 10%, 15%, or 20%.”

The president declared, “Venezuela is expanding, it is producing, and Venezuela is advancing in a magnificent project for the country, the diversified Venezuela,” while confirming that the economy grew at a “record” rate in the first half of this year, but he did not specify by how much.

In any case, not all regular people benefit from this so-called recovery.

Despite having the biggest growth in Latin America in 2022, according to the Executive, Venezuela still needs more aid to help its poorest citizens than any other countries in the area.

Dr. Javier Manrique believes that this gap results from the ongoing needs of the most vulnerable, including children, indigenous groups, persons with disabilities, and the elderly, to whom economic progress has not yet been made.

The doctor, Venezuela’s humanitarian coordinator, told EFE. the NGO Convite, “Humanitarian assistance in Venezuela must continue since, specifically for these vulnerable groups, the determining elements of their vulnerability have not disappeared, there is no economic recovery, there is no higher income.”

The organization, which assists senior citizens practically everywhere in the nation, underlines that 70% of this population only receives a pension of $23 per month, which leaves them unable to pay for their food or health care since the minimal expenses cost $400.

an appeal to the globe

The UN humanitarian chief, Martin Griffiths, stated this month that “needs continue to exist” and that “it is more important than ever that the international community continue to show solidarity with the Venezuelan people” despite the fact that the country is full of new businesses and international concerts.

Irianny is evidence that needs still exist. The teacher acknowledges that “some families” today are “better” than they were a few years ago, but she emphasizes that in her particular circumstance, she was able to improve because of humanitarian aid.

With the assistance I receive from these groups (NGOs), my life “might say that it has improved, which is what has allowed me to better both the economic and health position that my family perceives,” he claims.

The director of Convite insists that in light of this reality, it is necessary to draw attention to the flaws and “dramatic indicators,” with estimates of extreme poverty at more than 70% by non-governmental organizations, in order to secure international funding that enables us to continue helping those who need it the most. they require

“I think it is already significant confirmation of the level of misery they are enduring,” Manrique emphasizes, “that a person with all the rights inherent to their conditions as a human being has to pick between medicine and eating.”

The doctor, the UN, and the government all concur that it is crucial to integrate capacity building and humanitarian aid because they believe that by doing so, the embryonic economic recovery will be used to ensure that no one, especially the most vulnerable, is left behind.