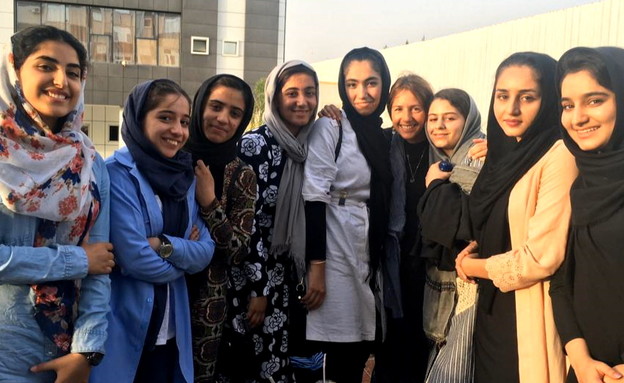 The last bus to freedom: It all started thanks to brave and unconventional friendships – friendships that began when Dana Herman, an Israeli journalist who came to Afghanistan to write an article for the New York Times about the success of the local women’s team in robotics, headed by Healy. When the Taliban captured Kabul, Healy’s father called her and told her to forget about the rest of the family. She, who is on the blacklist, had to find a way to escape immediately. Thus began the journey of Healy – who, thanks to a group of Israelis, survived the Taliban: “Killed my friends – but I did not lose hope and contacted her.”

In August, the United States military withdrew from Afghanistan. It was estimated that it would take the Taliban at least a few months to take over the country, but it only took them ten days. Hundreds of thousands of people who collaborated with the West, and especially women who were leaders in their field and dared to speak out against the terrorist organization, found themselves in mortal danger overnight. “They tried to kill a lot of women, and they killed,” Healy said. “They killed a number of my girlfriends who worked with the Afghan government. I was very worried that maybe they would persecute me and other women. But I continued to keep hope and contacted Dana.”

“I talked to the girls there who were in Kabul about what was happening to them,” Herman said. “I felt very helpless. You see what’s going on there, and you feel like you can do nothing. In fact, maybe something can be helped. I contacted everyone I knew. I asked – who knows, who knows, who does what, what you heard and all Such species. ”

Dana and Roni Abulafia, who is generally a documentary director, began to think about how to get refugees out of Afghanistan, in the days when the whole world was busy with exactly the same task, which seemed almost impossible. The airport in Kabul was blocked, the Taliban did not let people pass, the borders of neighboring countries were locked to the refugees, and in the midst of this madness, they tried to think of creative ways.

At first they tried to team up with groups from the rest of the world who participated in the evacuations, but it did not work out so well. They understand that they need more professional help, and they are joined by Yotam Pulitzer, CEO of Israaid, which specializes in helping with humanitarian emergencies, and understands well how to work in places where there are no rules, and should rely on a lot of perseverance, resourcefulness, connections and luck.

“This level of responsibility, in a country we do not know we do not have someone of ours there, it was very difficult, I did not sleep for about a month,” Pulitzer said. “On the other hand, we also did not see an option of giving it up. I mean, it was clear we had to finish this task, and there were obstacles all along.”

The first and biggest obstacle of all was how to persuade the Taliban to let refugees out of the country. The Taliban have made it clear – in order to allow an exit, they demand money and a lot, and here another Israeli comes into the picture – Sylvan Adams, a businessman and philanthropist. “I told Yotam, ‘Don’t worry about the price. No matter what the price, I’m taking care of it.’ And we started working,” Adams said.

After tens of phone calls, hundreds of thousands of dollars and operating a diplomatic pressure cooker, Adams found a solution on how to rescue the group to neighboring Tajikistan. “I had a friend who was doing business in this country and I told him, ‘You have to make this phone call now, there is no time,'” Adams described. “He immediately picked up the phone, called the president, and the next thing that happened was that the girls crossed the border to a safe place.”

From Tajikistan, the 42 women continued to Abu Dhabi, in a unique and first-of-its-kind humanitarian cooperation between Israelis and the UAE that agreed to accept the group. Dana, Roni and Yotam already thought they had completed the mission and are returning to Israel, but then following the success they were flooded with hundreds of requests from people whose lives were in danger, and turned to them to help them escape the Taliban’s revenge. “We had to do some prioritization and it was awful. That’s the awful thing,” Pulitzer said. Adams added: “We called it – risk factors, so we have the robotics group, the cyclists, the family of a Member of Parliament.”

The list included 125 lucky ones who were supposed to flee Afghanistan in the same way, waiting in hiding apartments for a phone call telling them to get on the bus. They hide their identities behind the burqas on the way to the border, already seeing the new life that awaits them, but then everything goes wrong.

Taliban fighters with drawn rifles surround the group. “The Taliban surrounded the building they were in and took out all the men, started beating them with sticks, stopped some of them,” Abulafia said. “One of the men on the team, Pardon, just took command of this situation, sent us a WhatsApp location and a picture of where he was. We told him that by 12 we would have an alternative plan, but hold on.”

Through the contacts they made within the Taliban, they managed to free the group, but realized that the land crossing was also already too dangerous. At the last minute, a rescue plane was landed in the north of the country. The group’s final destination was Canada, but visas there have not yet been approved, and in the meantime they have sought temporary refuge. “We searched all over the world,” Herman said. “We also turned to Israel, we asked them to take people who would pass through Israel and wait here for a while – Israel did not agree and it was a real shame.”

“The anonymous fund that helped us turned to the Albanian prime minister, and within five minutes he said he would take them,” Pulitzer said. Many in the group did not even know who was behind the inconceivable rescue operation. “When we arrived at the airport, I saw that their shirts had ‘Israid’ written on the back of their shirts,” said Kaswar Iski, who worked at the US embassy in Afghanistan. “Then I realized that Israeli people supported and helped us get here. It was strange and amazing.”

Here in Albania, the Afghan women and their families were granted temporary asylum, but the journey was not over. They are still looking for a country that will agree to accept them, and there they can build a new and safe life for themselves. “I will never forget the way they supported us, because they saved us from the Taliban and protected us,” said Leca, who was part of the women rescued. “We are grateful for that. Thank you very much.”