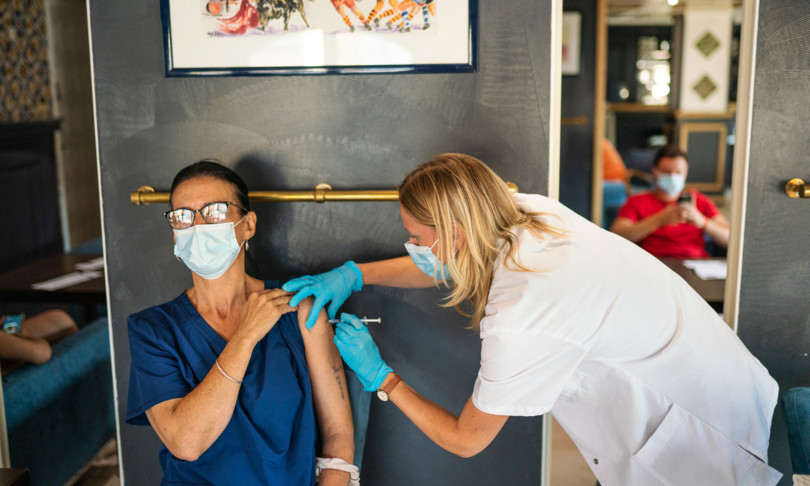 In Italy 86% of the over 12 population is vaccinated, positioning our country above the European average. The goal is to reach 90%, as confirmed by General Francesco Paolo Figliuolo, extraordinary commissioner for the Covid emergency.

However, Covid-19 is not defeated and the figure of 7.5 million Italians over 12 is worrying, including about 2.7 million over 50 who have not yet undergone the vaccine. The mandatory green pass to access workplaces, until now, does not seem to have significantly pushed the members of the varied #NoVax front and the people most afraid of possible side effects of the serum to vaccinate.

In the meantime, however, there is more and more talk of #terzadose.

Please hurry to do #terzadose to guests #rsa #COVID19

From 27 September the third so-called “booster” dose was approved for people over 80 who have done the second for at least six months, as well as guests and operators of nursing homes (RSA). But now the discussion focuses on whether to extend the third dose of the vaccine to the rest of the population, after the approval of the Italian Medicines Agency (Aifa) to administer the third dose of the Spikevax (Moderna) serum to people. of age. The opportunity of a booster dose with the Spikevax vaccine should be a priority for the immunosuppressed, transplanted, hyperfragile, over-80, residents of the Rsa and healthcare personnel “, confirms a note from the Agency, as already established for Pfizer’s booster dose.

CTS #AIFA: positive opinion on administration of a booster dose of the vaccine #Spikevax (#Modern) against #COVID19.

EMA concludes that a #BoosterDose of the #COVID19vaccine #Spikevax (from Moderna) may be considered in people aged 18 years and above.
Full announcement here:
https://t.co/N0DeQcnIPd pic.twitter.com/zkd0OLroue

With the artificial intelligence algorithms of KPI6 * we have analyzed the conversations on the web on the main thematic focuses, now that we are discussing the opportunity to continue with a mass vaccination not limited only to the categories of frail and elderly people.

In this phase, the conversations on #Terzadose and #GreenPass do not overlap, the discussion on the continuation of vaccination is detached from the political aspects inherent in the management of Covid-19 and the extensions of personal freedoms. In this case, the focus of the conversations tightens again on health aspects and any adverse effects of the “boost”.

Analyzing the most frequent associations detectable in conversations, among the most cited doctors we find Ilaria Capua who has already undergone the third immune stimulation, confirming that she “feels”, referring to some common and frequent side effects caused by vaccinations. Others argue, with concern, that the disease, becoming endemic, will require a fourth vaccination, to be repeated periodically as in the case of seasonal flu.

Among those who openly declare themselves opposed to the third dose, the push for vaccination is associated with the # health dictatorship, the #greenpass intended as an instrument of restrictions on personal freedoms, and vaccination trials in the absence of sufficient data to ensure the safety of people. While those who declare themselves in favor of the #Terzadose trust science, without fear.

It is the photograph of a polarized situation, where the analysis of the emotions that can be obtained within the published contents, highlights levels of disapproval and fear higher than those of admiration and joy.

Among the virologists and personalities directly involved in the management of the pandemic, the most mentioned on social networks are the undersecretary for health, Pierpaolo Sileri, Andrea Crisanti, director of the Microbiology department of the University of Padua – who in these hours has raised another alarm saying that the Johnson & Johnson vaccine hardly protects after 2 months -, and Silvio Brusaferro, President of the Higher Institute of Health.

It should be noted that among the regions in which there is talk of more than a third dose we find Lombardy, one of the hardest hit by the virus, confirming how much the pandemic has left a profound mark, and a particularly strong and lasting sensitivity.