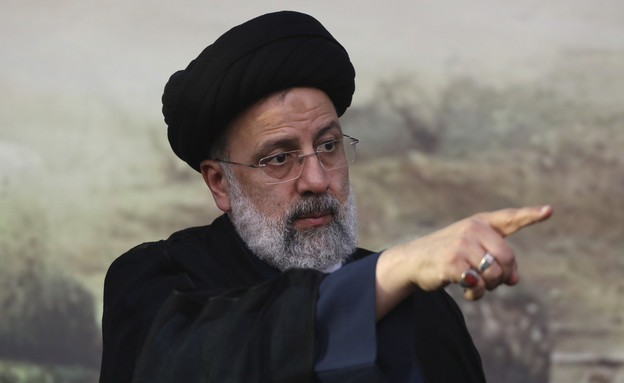 The slogan of President Rouhani’s election in 2013, then surprising everyone with his victory, was: “I am a jurist, not a general-” After a tumultuous eight years in which Ahmadinejad sat in the presidential palace in Tehran, committed to the Revolutionary Guards and provocatively defying the West, Rouhani’s election signaled to the political system – the public believes the nuclear is less important than a stable economy and free from Western sanctions- The leader understood the hint and after a political stalemate of years, within just two years a nuclear agreement was signed with the powers-

Now, after 8 consecutive years of President Hassan Rouhani, the Iranian people will go to the polls tomorrow (Friday) to elect a new president- The seven candidates approved by the “Council of Guardians of the Constitution” – a council of clerics and jurists from which the leader – testifies to the plans of the supreme leader, Ayatollah Sid Ali Khamenei, for the upcoming term: The return of the firm and conservative line to the presidency may give a significant boost to the Revolutionary Guards, which could have a major impact on Israel in the coming years-

The President – From Success to Failure

The president of Iran is the second most important decision-making factor in the country, and the most senior public in it has been elected- He is elected in general elections every 4 years and can serve up to two consecutive terms- The president must be a man of Iranian, Shiite descent, with no criminal record and “loyal to the idea of ​​the Islamic Republic-” In the last election campaign, 592 candidates submitted their candidacies, and only 7 passed the screening committee of the Guardian Council-

The second pattern to be learned from deepening the political life trajectory of Iranian presidents for generations concerns the course of their tenure: the president is always elected with great fanfare and change, but the structural difficulties in the system, The reasons for which were chosen- 4 years later, ahead of the second election campaign, he insists on his few achievements and manages with great difficulty to once again win the support of the public- In these 4 years, the president gradually becomes the enemy of the people, the main culprit in the diseases of the country and a hated, weak and isolated political figure – an ideal political climate for another 8-year round, which leaves untouched the top decision-maker – the supreme leader-

The upcoming presidential election is taking place at a much more dramatic time, which could affect Iran’s identity not for the next eight years, but for the next 30 and 40 years- Leader Khamenei is already 82 years old, his medical condition is deteriorating, and beneath the surface there is already a lively discourse regarding the identity of the heir-

Although the Iranian constitution defines an orderly and meticulous exchange procedure between a leader and his successor, in Iran, as in Iran – the procedure is sometimes a formal cover for an internal conspiracy- So far, there has been only one change of leadership in Iran – in 1989, between Ayatollah Khomeini and incumbent Khamenei- Although Khamenei’s tenure was approved by the “Council of Experts”, in practice it was a cover for a planned political move ahead of time: Khamenei served as president from 1981-1989 before the leadership throne with Khomeini’s death, and then-parliamentary speaker Rafsanjani was appointed president-

It is clear to all that the presidency on which the elected president will sit may in the coming years become a significant leap to the leadership chair- Khamenei also seems to understand this, and despite public criticism, has confirmed a string of prominent candidates in their conservatism, to make sure that the keys to the leadership of the Shiite power will arrive after his death to a man similar to him in his views-

Most of all, the election shows the despair of the Iranian people

Social networks and TV channels expect very low turnout on Election Day- It is not for nothing that last night the leader called on the public to go and vote en masse to prevent “service to the enemy”, which he says is trying to divide between the public and its leaders- The message itself is not new, but Khamenei certainly has cause for concern – the desperate public does not have good enough reasons to get to the polls-

“The election – could have taken place and could not have taken place,” said Bnei Sabati, a social media researcher at the Jerusalem Institute for Strategy and Security, one of the founders of the IDF Spokesman in Persian, and a native of Tehran, in a conversation with |- “There is despair- And simply subdued the Iranian public from its activism and activism, it stopped protesting- People who want change no longer believe in it, each side has the empty and recycled slogans- It is possible to continue without making choices- The supreme leader does not change- “

According to Sabati, in the current election campaign there is an open dialogue about the two governments that control Iran: the elected government and the shadow government – which is the real government, with the Revolutionary Guards as its hidden executive arm- “The visible government – with a president and ministers – is in fact full of officials who are a ‘shield’ for the shadow government so that the world can throw the complaints and demands and problems at them- The hidden government is the one who does, functions, conceals money These things are coming out- “

By law, a presidential candidate must win more than 50 percent of the vote- “If Raisi does not win such a percentage, there will be a round two weeks later, on June 25,” Sabati emphasizes- “Even senior conservative elements say so, indicating the loss of the road and the bankruptcy of the vision of the revolution-“

Sabati adds that in the current election campaign the other candidates are running like puppets, with the regime’s intention to create an illusion of election: “They are not running to” reserve “a place for the next election, most have already run several times and lost- They come to run because of their failures, not their successes-“

A candidate from the conservative-religious current in the upcoming elections, and is considered the leading candidate according to the polls in the country- He currently serves as head of the judiciary- For years he was considered a hated figure in the wake of the many executions he ordered after the Islamic Revolution and the Iran-Iraq War, by virtue of his position as Attorney General- It is estimated that he signed the execution of between 5,000-30,000 opposition supporters, which earned him the nickname “the executioner from Tehran”- He himself never addressed the issue in public-

Raisi is one of the top clerics in Iran, and regularly leads Friday prayers in the holy city of Mashhad and the Imam Racha Temple- Prior to his appointment as head of the judiciary, he served as chairman of the foundation, Astan Quds-Rachoi, who holds a huge fortune and manages many of the holy sites in the country-

In the mid-term elections of Rouhani, in 2017, Raisi came up to run as an unknown factor in the political-public arena, but as a preferred factor over the religious establishment- In the end, Raisi garnered about 38 percent of the vote, but lost to Rouhani, who won 57 percent- The 2017 election accustomed the public to his character positioning him as a worthy factor to replace Rouhani-

“Raisi has risen very quickly in the ladder of promotions and senior positions in the country,” Sabati describes- “The leader is very trusting and believes in him- He is very attached to the Revolutionary Guards- Ahmadinejad was a puppet, Raisi is the flesh and blood of the regime- The leader wants him and probably raises him as the next leader- He may also designate him to serve as a ‘bridge’ or period- “Meanwhile, until the leader’s son – Majatba Khamenei – ascends the leadership throne, in order to prevent the presentation of a succession-“

Surprisingly, Sabati claims that the election of Raisi can also have benefits for the State of Israel: “There is also an opening for hope – there is a belief that he will actually take steps that will benefit and bear fruit: just because Raisi is in power will allow the amended nuclear agreement- The latter are in intensive negotiations in Vienna- ” If the negotiations do succeed and an agreement is signed, Raisi will actually reap the fruits of the sanctions removal after Rouhani’s men have done the hard work of negotiating-

However, Sabati disapproves and says that the conservative background and difficult temperament are not suitable for leading a change, especially since the warming of the direct confrontation in Israel between Iran and Iran, which was reflected in attacks on vessels in the Persian Gulf and operative operations on Tehran land, makes change difficult- Of real-

A candidate on behalf of the conservative-security current in the elections and has been one of the current leaders in recent years- Razai, a doctor of economics, served for 16 years as commander of the Revolutionary Guards, and currently serves as secretary of the “Council for Determining the Interest of the Regime,” which aims to resolve disputes between the legislature and the Guardian Council, and is almost entirely in charge of the leader-

Razai has previously run for the presidency, and in the 2013 election he won 10 percent of the vote- An arrest warrant was issued against Razai by the Interpol police regarding his involvement in the 1994 attack on the Jewish community building in Buenos Aires-

The leading candidate on behalf of the moderate camp- Professor of Economics at Tehran University, served as Governor of the Central Bank of Israel between 2018-2021 and as Chairman of the Social Security in the country between 1994-2006 and 2016-2018- Mati has been accused in recent years of embezzlement and corruption, and during his time as Governor of the Central Bank Which broke abnormal negative records-

Said Jalili (55) – Retired from the race

Mohsan Maharlizada (64) – Retired from the race

Thanks to Yaron Schneider for helping prepare the article