Passengers were documented singing antisemitic songs at an ultra.Orthodox passenger on a flight 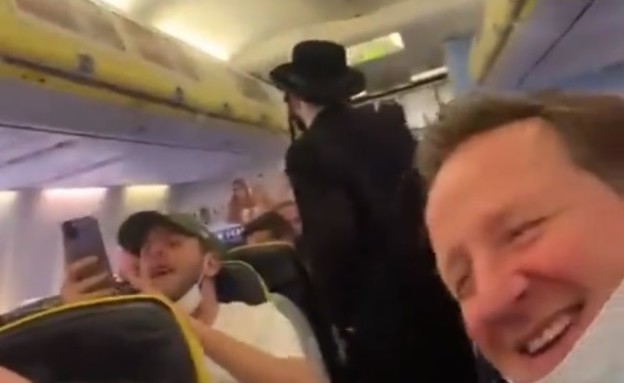 Ugly anti-Semitism in the air: A video circulated on social media shows documentation of fans of the English football team West Ham, who flew to Belgium last Thursday with Rainier, while drinking and singing towards an ultra-Orthodox Jewish passenger – “We have a foreskin, what about you?”

The photo caused a stir on social media and many called on the West Ham football team to ban the fans and condemn them. Following the incident, the team did condemn the fans seen in the video and said it was considering banning them from entering the club’s home ground in East London for life.

“West Ham United are shocked by the content of the video circulated on social media and condemn the behavior of the fans involved. The club is in contact with the airline and the relevant authorities to identify the people,” the club said in a statement.

They added: “We continue to be unequivocal in our position – we have zero tolerance for any form of discrimination. Anyone identified will receive unlimited distance from the club. Equality, diversity and inclusion are the heart of the football club and we do not accept anyone. Who does not share these values. “

Essex Police (Essex), The law enforcement supervisor at Stansted Airport in London, watched the video on social media and began investigating to identify those involved. One 55-year-old fan was identified and arrested as soon as he returned to the airport after the game. He faces a hate crime charge, which could put him in jail for months.

The video shows that the cabin crew, some of whose men were standing in the aisle when the men began singing the antisemitic song, did not intervene. As of this moment, Rainier has not released any statement regarding the tragic event.

Racheli Bartz Ricks, head of the Anti-Semitism Department at the World Zionist Organization, noted that she takes the act seriously: In addition to the harsh cries against the ultra-Orthodox Jewish passenger, it is to be commended the responsibility of the West Ham United football team that reportedly announced responsibility and sanctions against its fans who expressed themselves ugly outside the football stadium, conveying an unequivocal message. “He will also be adopted by other teams in football and in all sports. Once fans understand that their actions are responsible outside the stadium and sanctions are imposed on them in a place that hurts them, and in a way that prevents them from participating and watching team games, they will think twice.

This is not the first time antisemitic chants have been directed at Jews during a flight. Just last July, London Mayor Sadiq Khan (Sadiq Khan), noted that since Operation Wall Guard he has seen an increase in cases of antisemitic violence in his city. also, About two years ago, another incident occurred, in which a Jewish family from the United States was allegedly taken off the flight for antisemitic reasons.