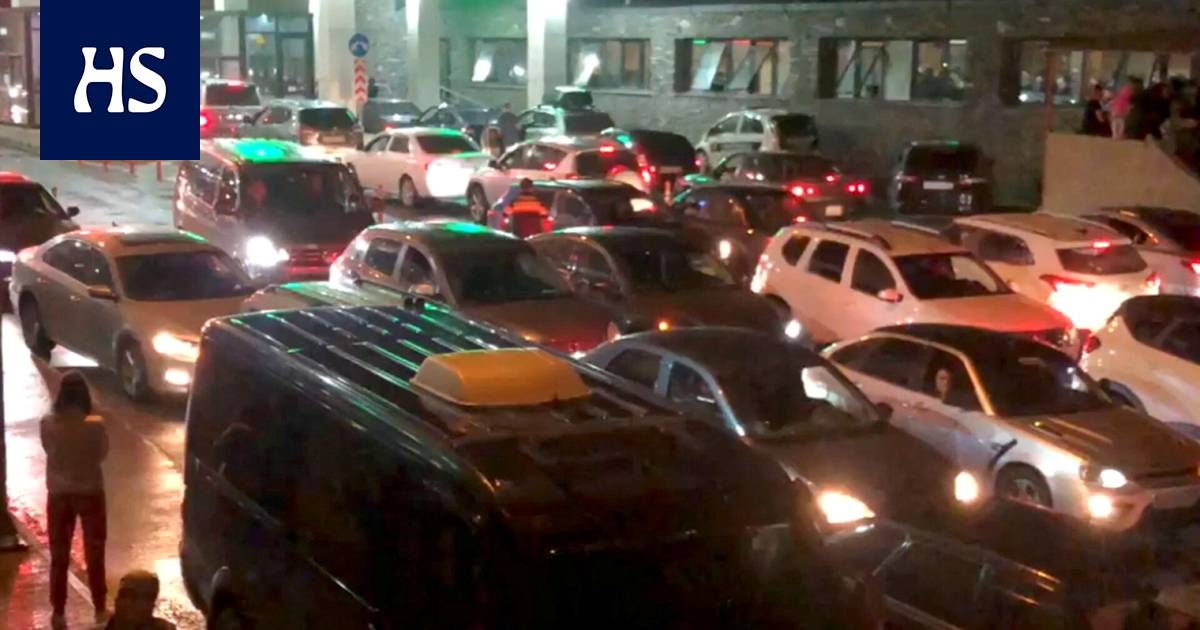 In recent days, there have been reports of a huge spike in the price of international flights in Russia, and flights to many destinations have been sold out. As for land borders, congestion has been reported as far as Mongolia.

Georgian There have been five-kilometer queues of cars at the border station against Russia, said the British public broadcasting company BBC the night before friday. The border crossing has taken seven hours, even though Georgia does not require visas from Russians.

37 years old from Moscow Aleksandr again left for the airport when the president Vladimir Putin had started giving his bellicose speech on Wednesday morning, reports the US newspaper The New York Times.

Putin announced the motion. During the taxi ride, Aleksandr bought a plane ticket to the Uzbek city of Namangan, which he had never heard of. You could still get tickets there, unlike Istanbul or Kazakhstan’s Almaty.

Namanganin’s plane was full of people like him, Aleksandr told The New York Times: “Young men bent over their laptops.”

In international After the so-called partial launch of the business in Russia, media outlets have reported on sold-out international flights and congestion at border stations.

In Finland, the number of immigrants at the Vaalimaa border station has also increased somewhat. Compared to many of Russia’s neighboring countries, traffic on the Finnish border is restrained by the fact that Russians need a visa to enter Finland.

Read more: Border Guard: Traffic on the eastern border continues to be brisk, almost 6,000 Russians arrived in Finland on Thursday

At least tens of thousands of Russian men of service age have fled the country, according to various sources.

“The exodus is even greater than at the beginning of the war,” said the British newspaper of The Guardian interviewed Ira Lobanovskaya. His NGO A guide to the free world help Russians who oppose the war leave the country.

The organization’s website has been visited more than 1.5 million times since Putin’s speech, Lobanovskaya said. According to his estimate, about 70,000 men who have relied on the advice of his organization have fled Russia or have made an escape plan.

“My in my case, launching a business caused the tolerance threshold to be exceeded,” said the 29-year-old interviewed by The Guardian Ilyawho is an official of the Moscow city administration.

“Tomorrow I will be in Kazakhstan.”

In the last few days, there have been reports of a huge spike in the price of international flights from Russia, and flights to many destinations have been completely sold out until next week. As for land borders, congestion has been reported as far as Mongolia.

The prices of the remaining tickets abroad have increased by more than 5,000 euros, the Reuters news agency reported on Thursday. The cheapest one-way tickets to the United Arab Emirates to Dubai cost more than 6,000 euros, reports The Guardian.

Russian men the exodus is a noteworthy and much-talked-about phenomenon, but it still doesn’t seem to change the overall picture of Russia’s war of aggression.

The majority of Russian men do not have money or contacts to rely on to suddenly go abroad permanently. It’s impossible to know how many would even have desires.

The number of departures must be in the tens of thousands. Even if there were a hundred thousand or more of them, it would only be a small proportion of the men under forty in Russia.

Information service I’m a statistic According to