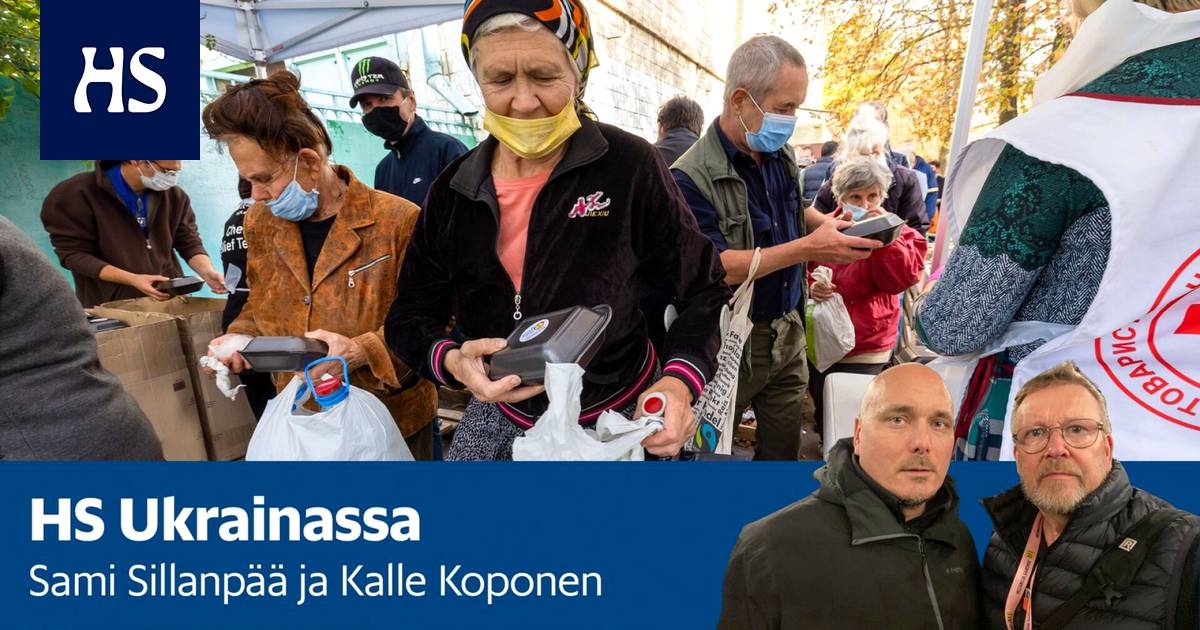 In Mykolaiv, Ukraine, close to the battle line, HS observed as hundreds of civilians lined up to get food from a humanitarian organization. Behind the front line, Russia is currently holding a phony referendum in Kherson.

The crowd moves when they become starved. On Monday at two o’clock in the afternoon, the daily food distribution on the main street of Mykolayiv began. People move in pairs under the tarpaulin awning of the humanitarian group, where each person finishes the lunch box-sized quantity of chicken, rice, and vegetables.

Many people return to the front of the line after obtaining the box in a half-run if they need more medication.

“This is my first time here. I lost my work and am no longer able to purchase as much food. After taking his own dose, Mariana Petrova remarks that life has gotten harder.

Hunger problems and an approaching enemy.

The city of Mykolaiv lies in southern Ukraine. Only 30 kilometers separate the city from the battlefront, and every night Russia launches missiles or rockets at it. The closest city beyond the front line is Kherson, which is under Russian occupation.

The Russian occupiers are currently holding a phony referendum in the Kherson region. The same drama is also being performed in the Russian-occupied counties of Zaporizhzhia, Donetsk, and Luhansk. On Tuesday, the polls close. Vladimir Putin, the Russian president, is anticipated to formally recognize the regions as being a part of Russia later this week.

Petrova snorts at the referendum at the food tent.

“It’s forbidden. Nobody believes that to be true. Nothing has changed, he claims.

The United States, the EU, as well as a number of other nations have already said that they reject the referendum and the plunder of Ukrainian territory. The OSCE organization claims that the voting violates Ukrainian law. Under occupation, people are unable to openly voice their opinions, and the outcome is unrepresentative since a significant portion of the local population has fled to other locations.

On its top-rated state television channel, Russia has broadcast news showing Ukrainians in the seized territory celebrating the prospect of joining Russia. Videos posted by Ukrainian citizens on the messaging app Telegram reveal how electors are compelled to cast ballots in plain sight while being watched over by two armed guards. Friends, disregard that rubbish regarding the referendum, comments a Kherson resident on Telegram.

Even during the day in Mykolaivin, the streets are peaceful. Half of the population, or about 500,000 people, is thought to have left. There aren’t many automobiles on the still-green tree-lined streets. Numerous stores are shut. To shield the windows of the homes from the pressure waves of explosions, chipboard has been fastened to them.

In the food line, you can usually see ladies and the elderly. The front is occupied by many of the young men.

The areas under Russian authority are referred to as “temporarily occupied” in Ukrainian.

Tatyana Ostapenko, a customer, adds, “We still think that someday all regions of Ukraine will be liberated.”

Our lives will continue and peace will come.

That moment is still far off.

Ostapenko and other Mykolajiv citizens go looking for water every day as part of their everyday life. Water in canisters is available at many locations throughout the city.

When the pipes delivering water from the Dnieper to the city were destroyed in April, a water crisis already existed. The pipe burst occurred on ground under Russian control, making repairs impossible.

Read more: Only defeating Russian forces in Kherson would put an end to the situation after Russia destroyed Mykolayiv’s water supply.

“The water that is dripping from the faucet is foul and brown. Even washing cannot be done with it, claims Ostapenko.

Ukraine began a counteroffensive about a month ago, and as a result, it reclaimed its occupied areas in the area northeast of Kharkiv.

The southern front is moving slowly here. Ukraine has made progress south of Mykolaiv, reaching a few villages, but no breakthrough is in sight. The missiles will hit Mykolaiv, but the Russian artillery fire won’t.

“Every evening. Even if you don’t get too close, the windows shake, according to Andrei Beznitsky.

“Everyone is suddenly really tense. You never know what the day will hold when you wake up.

Beznitski may see some practical implications in Russia’s soon-to-be-announced territorial conquests. In his native village, which is currently held by Russian forces, his father still resides close to Nova Kahovka. The father runs the risk of remaining in territory that Russia may soon annexe.

On the other hand, Beznitsky is already unable to see his father due to the current circumstances. Not even calling, as the local message links were destroyed when the Russians arrived.

“My father hasn’t communicated with me in four months. I’m quite concerned.

Beznitski, a former soldier, has been on sick leave for 12 years at this point. He views the unexpected referendums that Russia set up as mere ruses intended to increase pressure on the Ukrainian people.

“The occupying Russians are attempting to undermine us. Mentally first, then physically. They won’t prevail.

Mykolajiv hears the first howl of the air alert. Nobody is interested in it. On the side of the main roadway, the elderly women keep up their calm stomping.

“No one goes to the bomb shelter since everyone is used to the alerts,” he claims, according to Tatiana Strelkova, a volunteer at an alternative distribution location.

Strelkova asserts that despite Russia’s threats of referendums, nothing will change.

They are prohibited, and nobody in the world is familiar with them.

The conflict rages on, though, and new battles must be won every day.

By seven o’clock in the evening, Mykolayiv’s streets are deserted, and residents have retired to their homes to await the events of the night.