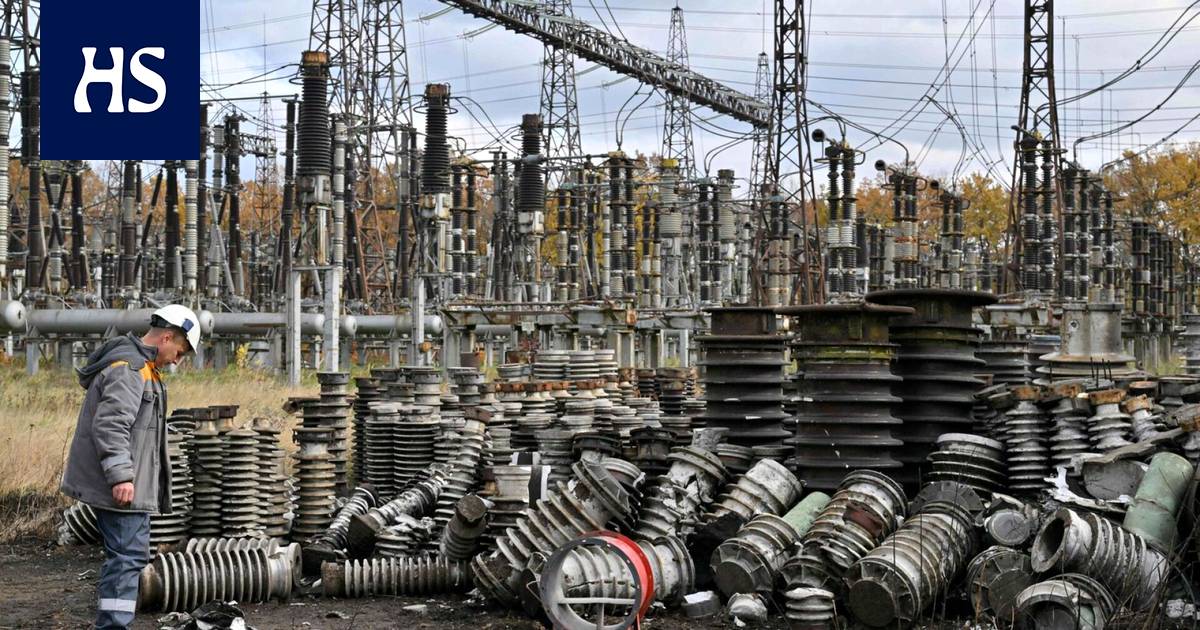 Ukraine has asked European grid companies for spare parts to rebuild the energy infrastructure. Finland’s Fingrid will send help at the beginning of next year.

On Wednesday much of Ukraine went dark. Ukrainian authorities reported widespread power outages and heating and water supply disruptions as a result of Russian missile strikes.

Power outages were experienced from the capital Kyiv to Odessa in the south and from Lviv in western Ukraine to Kharkiv in eastern Ukraine.

Published by the Armed Forces of Ukraine Telegram review according to Russia fired a total of 70 Kalibr cruise missiles at Ukraine on Wednesday afternoon. Ukraine says that its air defenses shot down 51 of these.

“Usually, it takes hits in several critical places to cut off the electricity in an entire city,” says the planning manager Timo Kaukonen from Fingrid.

The core networks and part of the regional networks are looped so that several parallel wires and connections lead to the substations. When a single line is destroyed, the neighboring ones take care of the electricity transmission.

American think tank ISW has evaluatedthat the Russian military is still capable of large-scale strikes against Ukraine’s energy infrastructure in the near future, even though its stockpile of precision tactical weapon systems is dwindling.

The United States has reminded that the intentional destruction of energy infrastructure is a war crime.

“Energy terror is comparable to the use of weapons of mass destruction. When the temperature is below zero, and millions of people are left without energy sources, without heating, without water, this is an obvious crime against humanity,” the President of Ukraine Volodymyr Zelenskyi said on Wednesday in his video call.

Monet the parts of the electrical infrastructure are such that they cannot be repaired after an impact, but must be replaced with new ones, Fingrid’s Kaukonen states. For example, insulators are usually porcelain.

“Yes, it takes months when the electrical infrastructure is repaired. Although during the crisis work is done day and night, so it is difficult to estimate the exact times.”

Ukraine’s energy security also depends on foreign spare parts. According to Kaukonen, Ukraine has requested spare equipment from other grid companies in Europe, such as Finland’s Fingrid.

“Finland is sending older equipment in stock to Ukraine in January. It will take some time when some of the devices to be sent are dismantled from the old stations.”

Finland sends to Ukraine, for example, separators, current transformers and circuit breakers. The exact information is confidential for security reasons.

Russia has carried out several attacks on Ukraine during October and November with the intention of destroying, among other things, electricity and water distribution. Wednesday’s attacks were Russia’s seventh large-scale attack on Ukraine’s energy infrastructure, according to Ukraine’s state electricity transmission and grid company Ukrenegro In Telegram.

According to Ukrenegro, there is still no reason to panic. It said it has started work to connect all areas to the back-up network. In many areas, it was reported that the electricity was back on as early as Wednesday.

“Practically all major thermal and hydropower plants in Ukraine have been damaged following Russia’s attacks against Ukraine’s energy infrastructure,” Ukrenegro head said at the press conference According to Ukrainska Pravda.

On Wednesday, after Russian missile strikes continued to destroy power lines around the country, Ukraine also disconnected three of its nuclear power plants from the grid. The Zaporizhia nuclear power plant has already been shut down before. It was bombed again on Monday.

Even last year more than half of Ukraine’s electricity was produced by nuclear power.

One thought on “Almost all large thermal and hydropower plants in Ukraine damaged, expert assesses the damage”