The new Iranian president speaks: “We will not change policy because of the nuclear agreement” 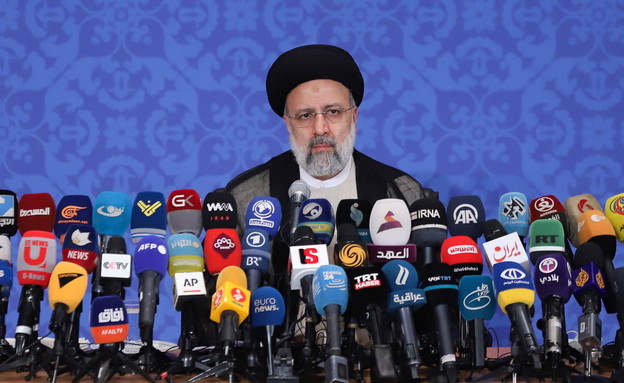 Elected Iranian President Ibrahim Raisi convened today (Monday) the first official press conference since his election to office last Saturday. During a press conference in Tehran, the president-elect of Iran stressed that Iran’s foreign relations would not depend on decisions made under the nuclear deal. “We will be interacting with the whole world,” he stressed.

Raisi further stressed that the United States had violated the nuclear deal and accused the EU of failing to meet its obligations. ““Washington and European countries should salute and respect the nuclear deal,” he said. The president-elect of Iran also referred to the severe economic crisis in the country and claimed that he would address it through “local resources and full trust in the young Iranians”.

Raisi has been serving as head of the judiciary since March 2019, with the direct appointment of Supreme Leader Khamenei. He claims that the US sanctions against him for human rights abuses are unjustified because they were imposed on him during his term in office. Contrary to the American claim, it actually protects human rights.

Asked “Would you be willing to meet with US President Joe Biden?” – Raisi replied in the negative. He said the US must immediately return to the nuclear deal and remove all sanctions. He further stressed that the Iranian missile program is not open to negotiations.

At the end of his speech, the Iranian president, who is intended for relations with Israel, said: “The Palestinians are the landowners, and Iran will continue to protect them and Palestine.” He further stated that his country strives to improve its relations with the countries of the region, but on the other hand attacked Saudi Arabia for its interference in events taking place in Yemen.

Israel is being held – the Arab world is welcoming

Raisi, who is affiliated with the Ayatollah regime, holds positions almost opposite to his predecessor regarding Iran-West relations and, according to estimates, is expected to succeed the Khamenei leader, whose medical condition is deteriorating. Upon being elected to the presidency of Iran, Raisi received warm congratulations on his election from Iran’s Supreme Leader Ali Khamenei and outgoing President Hassan Rouhani. Additional blessings also began to flow from the leaders of the Arab world, including: Turkish President Recep Tayyip Erdogan and Syrian President Bashar al-Assad, whose Iranian branches are based on Iranian affiliates.

Iran’s Supreme Leader Ali Khamenei told Raisi in his blessing that “the Iranian nation is the big winner in the elections. The Iranian nation has once again opposed the mercenary propaganda of the mercenaries and overcame the temptation of criminals and murderers.” He further claimed that Iran had shown its presence in the heart of the political arena in the country despite the economic crisis and the outbreak of the corona virus. “The great and exciting presence in the elections has added a glittering page of honor to Iran’s history book,” he stressed.