Involvement of Israelis in Turkey: The court extended the couple’s detention 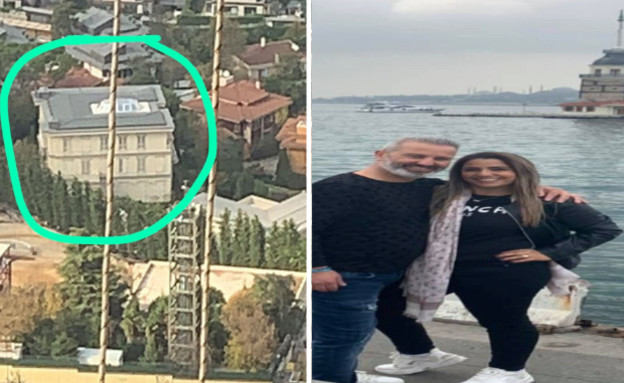 The arrest of Israelis in Turkey is complicated: Three hours after the trial ended, the court in Ankara today (Friday) extended by 20 days the detention of the Mordy and Natalie Oknin, a couple of Israelis arrested after photographing Erdogan’s palace. This is in contrast to earlier estimates that the state will seek to deport the couple. The detention of the guide who accompanied the couple was extended until Sunday.

For the Turks, the suspicion clause against the couple is espionage. During the hearing, a representative of the Turkish prosecutor’s office claimed that the couple photographed not only Erdogan’s palace and private home, but also the security positions and cameras. According to the prosecution, the two marked the photos, highlighted them and sent them to a third party, so they intend to file an indictment against them for espionage.

The Israelis’ local lawyer claimed that the couple took pictures for the family because they did not know that it was forbidden to take pictures. “They are not spies,” he said at the hearing. “All in all, these are spouses who practice their profession. I want to release them immediately to their home in Israel.” But the local prosecutor’s office insisted, the hearing ended at 15:00 and after that the judge went out for a consultation. Among other things, the prosecution representative submitted confidential reports to a judge who decided after three hours of consultation to extend their detention by 20 days prior to the filing of an indictment.

Only this morning the Turkish authorities officially notified the State of Israel of the couple’s arrest through the consul in Istanbul and since then he has been in constant contact with the family in Israel and updates them in real time on what is happening.

“This is an illusory and unacceptable decision, both in the criminal court and in the international court,” said Adv. Nislowitz, who represents the family. I plan to fly tomorrow to be by the family’s side and try to help as much as possible to get the couple home as soon as possible. This is an unnecessary arrest that smells of foreign motives. I intend to do everything in my power so that my clients can come to Israel. ”

The family members in Modiin do not know how to deal with the difficult news. They did not expect or think that this would be the end of the couple’s trip. Eran Perry, Natalie Vaknin’s brother who was arrested in Turkey, said in an interview with “Friday at Five”: He keeps asking, “Where is Mom?”

“I want to appeal to the Prime Minister, the Minister of Justice, the Foreign Minister and the President of the State to help us deal with this difficult time. The debate with the Turkish government is beyond what we know. The consul in Istanbul is constantly updating us on any developments in the debate. “We want to contact all the relevant parties in Israel and the Turkish government – let us talk to Natalie and Mordi, to hear from them that everything is fine. I ask all the people of Israel to keep their fingers crossed for us.”

A couple, Egged drivers from Modi’in in their 40s, went on a birthday trip to Turkey and stayed at the Elite Hotel in Ceremonial Square in Istanbul. During a tour of the Asian side of the city, across the Bosphorus, from a lookout from the Communication Tower on Chamelija Hill, the local guide drew their attention to the palace built by President Erdogan near a large mosque.

The woman was very enthusiastic, pulled out her phone and took a close-up of the palace. The couple did not know that photographing the palace was a violation of the law in Turkey. A security woman at the scene who heard Erdogan’s name was thrown into the air tensed, asked to view the photos, detained them and called police. All three were arrested because they took a forbidden place and were taken for questioning. The connection between the holiday couple in Turkey and the family in the country has been lost. They did not arrive on the flight where they were supposed to return to Israel and the worried family members turned for help.

The receptionist of the “Elite” hotel told in a conversation with N12 On the couple’s absence: “They did not come back to us. They should have checked out but they did not come. Because we do not have the ability to find out where they are, I can not tell you. We did not receive information that they disappeared. We just “They know they did not check out of our hotel.”

Turkey is considered a very sensitive country in security, especially after the 2016 coup attempt. The Turkish media does not cover the affair and does not currently link it to the affair of exposing the alleged “Mossad cell” in Turkey. At this stage it seems that there is a misunderstanding and the Foreign Ministry said that the case is known and handled.