Fear: Erdogan will demand policy changes in exchange for the couple’s release 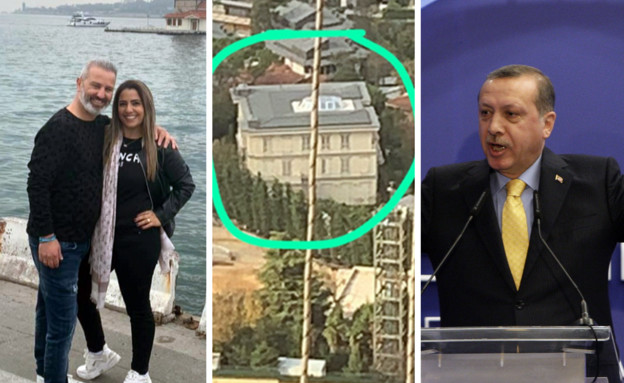 Israel fears that the arrest of a pair of Egged drivers from Modi’in, Natalie and the Oknin rebels, while traveling in Turkey, will eventually turn into a diplomatic incident between the two countries. The fear is that Erdogan will try to take advantage of the situation to get policy changes in exchange for their release. Meanwhile, the Turkish authorities intend to accuse the two of spying, although in Israel they make it clear that they have nothing to do with any state agency.

The prosecution in Istanbul is determined to file an indictment against the couple, but there is still a debate on which section to charge them with: the most serious section which is espionage for a foreign country, or the least serious section of conspiracy to commit a crime that would harm state security.

At the political level, they are following what is happening in Turkey and there is someone who already raises the possibility that President Erdogan has identified an opportunity here and may ask for compensation for their release. However, it is important to emphasize that although this is a detention that seems very puzzling to Israel, there is still no clear indication that the motive behind it is political – so most of the efforts at the moment remain on the legal and consular levels.

If we compare this to the story of Naama Yissachar who was in a Russian prison and released after diplomatic efforts, where it was very quickly clear to Israel that the background to her arrest is political. In the case in Turkey, although there are no signs of this yet, Israeli sources told the N12 that there is a fear that Erdogan will recognize an opportunity and ask for some kind of compensation that is currently unclear.

It is important to note that an unusual thing happened last night: the State of Israel has officially stated that the couple does not work with any Israeli intelligence agency. It is not uncommon for the state to issue such a notice. For example, a few weeks ago, when Turkey announced that it had arrested 15 “Mossad agents,” no similar response was received from Israel. This is an attempt by Israel to allow the Turkish authorities to get off the tree in this affair, before it becomes a political incident that could affect relations between the two countries.

The couple’s family members were asked by Foreign Minister Lapid and senior officials of his ministry with whom they are in contact not to speak more in the media. One family member said he was told he needed to “lower his profile” and that their media interviews could hurt his release efforts.

After the Turkish court extended the two’s detention by 20 days, the investigation of the two continues and even today they were interrogated separately. Last night (Saturday) a long meeting was held in Istanbul attended by Adv. Nir Jaslovitz representing the couple, the Israeli consul and a senior Turkish official.

Natalie and Mordi’s family members are still helpless and so far neither of them has been able to contact the couple. “We are in a storm of emotions, crying, full of anger at everyone and ourselves,” one of them told the N12. “It fell on us like thunder on a clear day. We’re just crushed.”

Advocate Nir Jaslovitch said: “I see and I am present to know that they are making every effort, including the Israeli embassy, ​​to do everything in their power to bring Natalie and the rebels home, and I hope that this will be the case in the near future.”