For the first time since she was arrested: Natalie Oknin talked to her daughters 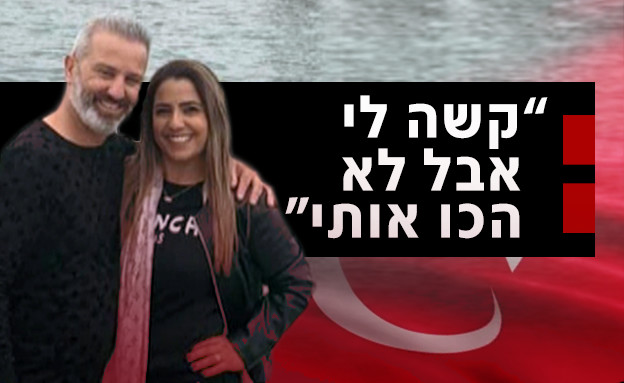 Natalie Oknin, who is detained in Turkey, spoke to her daughters in Israel for the first time tonight (Wednesday). In the moving phone call from the Istanbul prison to the family home in Modi’in was updated, Natalie’s daughters heard for the first time from their mother about the life and conditions of detention, having so far had to be updated on individual details provided by the lawyer representing the two in Turkey.Natalie’s daughters opened the conversation and told her that both Prime Minister Bennett and Foreign Minister Lapid were also involved and working on the matter in person, and we updated her on the phone conversations with them. “Be calm, be strong,” the girls told her. “I am strong. If you are strong then I am strong too,” Natalie replied.

Coverage of the couple’s arrest in Turkey

One of the most dramatic moments in the conversation was when Natalie heard her daughter’s voice, Shoval. “Trail here? Trail in life?”, She asked, “Why did you think she was not alive?”, The girls in the country answered her. “I do not know, I was full of suspicions and dreams and thoughts,” Natalie replied in shock. “Do not be afraid, mother, everyone is alive and everyone is fine and everyone is waiting for you. We are never alone, the whole family is here, everyone is helping, taking care of money and finances and also Ofek is fine. We take care of him and he eats.”

Afterwards, Natalie told the girls about the conditions under which she was being held in the detention center in Turkey: “I was treated nicely, a girl is always close to me. If I need the bathroom, she goes and accompanies me.” When asked if anyone had beaten her, Natalie immediately said no. “I was not touched, I bought things in the canteen, with the showers I have a hard time, but I manage. They brought me a big box of chocolate to spread like Nutella, they bring me fresh bread several times a day and I cut and spread. They also brought me clothes and underwear, shampoo and conditioner.”

At this point came the most exciting moment, when Natalie turned to her daughters and asked to hear a short song, which would encourage and uplift her spirits: “I want Shoval to sing me a little song, an excerpt from Matti Bitton, ‘The Heart for a Mother.'” Shoval complied with her request immediately.

Afterwards, Natalie’s daughters asked her coach to stay strong, and demanded of her: “Need you here, do not lose your sanity. It’s another second will be over, you can not return dysfunctional to the horizon.” The girls later asked to make sure that Natalie understands why they can not shoot her a video with her little son Ofek: “Mom, we can not make you a video with him, you must understand that.” They told her that he was fine in the meantime, “does not ask many questions, he does not know anything, he does not watch TV, we told him that you can not return at the moment because there are no flights to Israel.”

Yesterday, Israeli diplomatic representatives met with the couple in their detention cells in Turkey. A statement from the Foreign Ministry said that Ronen Levy, the Israeli consul in Istanbul, had met with Natalie, while Udi Itam, the consul general, had met with Mordi. “The Israeli diplomats also met with the prison authorities in order to ensure that the couple will receive proper and proper conditions,” the Foreign Ministry said.

Yesterday, Natalie also met for the first time with the lawyer representing her and her rebels, Nir Jaslovitch. During the meeting, she gave him information about a video that could strengthen her line of defense in a Turkish court, where an indictment for espionage will probably be filed against her and the rebels. Oknin told Adv. Jaslovitch that she had previously been photographed for a marketing video for Egged, where she works, and asked him to obtain it. She claimed that it was not possible for a spy woman to be photographed for the advertisement.

Meanwhile, the Oknin family has launched a campaign to fund the legal representation of the detained couple in Turkey. “They have been held in a Turkish prison for a week and all because of taking an innocent picture. Today we are all mobilizing to bring them home,” the campaign statement said. “Natalie and Mordi are currently being held in a Turkish jail for at least the next 20 days, but no one can really say how long it will take,” the family members added. “One thing is clear beyond any doubt: until Natalie and the rebels return home, they must have regular legal representation from an Israeli lawyer and local lawyers in Turkey.”