Institutional Involvement and Compensation for Erdogan: The Open Questions in the Detention Case 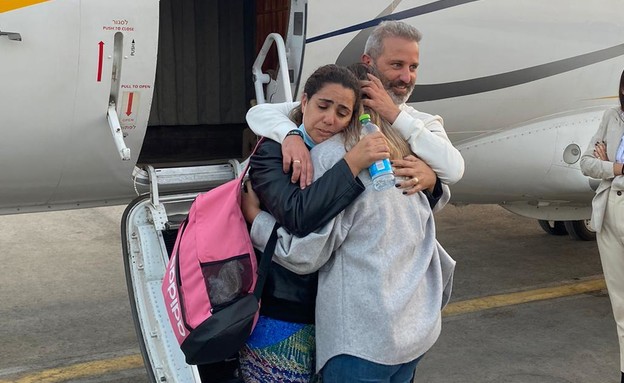 Question marks behind the couple’s return to Israel: Shortly after 6 a.m., the rebels and Natalie Oknin landed in Israel after nine days in detention in Turkey. The two, who were arrested on suspicion of espionage after filming President Erdogan’s residence, were released after a series of intense behind-the-scenes actions. Prime Minister Naftali Bennett will hold a video call with family members at 10:00 a.m. and will later speak for the first time with Turkish President Recep Tayyip Erdogan.

In a first statement after the release, Natalie Oknin said: “We are very tired, exhausted and thankful to all the people of Israel. I read Psalms in prison that strengthened me. A miracle happened to us, thank you for your tears. I want to return to my line and my passengers.” How were the secret contacts for the release of the Israelis conducted and was Israeli compensation promised to Erdogan? The open questions in the case of the arrest of the Oknin couple in Turkey.

Has Israel promised a political return to Turkey?

A political source clarified that the release of the Oknin couple did not take place through a “deal” and should not be an Israeli consideration for the move, but it is estimated that following the Turkish gesture, there will also be an Israeli gesture. It is not yet clear what leverage the pressure that caused Erdogan to decide at this moment on release. Prime Minister Bennett will speak for the first time today with Erdogan to thank him for his liberation efforts and in this respect it seems that the Turkish president, who has long been interested in warming relations with Israel, has already achieved what he wants.

In the Naama Issachar case, too, political sources clarified that no compensation was promised in exchange for the release of the young Israeli woman from the Russian prison, but later it became clear that Israel granted Russia a variety of concessions, some procedural, some related to access to key structures and some to Israeli citizenship.

Housing Minister and cabinet member Zeev Elkin commented this morning on the Oknin couple’s release from custody, saying the crisis could lead to warming relations between Israel and Turkey. Is this a hint of consideration or at least an Israeli gesture that made Erdogan decide on his release?

Were the Americans involved behind the scenes?

Erdogan is known to have wanted to warm up relations with the Biden administration, but diplomats have insisted that they acted directly with the Turks. Has an attempt been made to involve the US administration in the crisis between the countries?

How did the Institute for the Liberation of Israelis operate?

The Mossad, led by the organization’s head Dedi Barnea, launched a special Knesset and conducted the rescue operation in a sensitive manner, in wireless silence. Acted?

What was President Yitzhak Herzog’s involvement in during?

President Herzog also “opened doors” and held many talks with Turkish officials. Who did he talk to and how did he contribute to ending the affair?

What will the incident do to Israeli-Turkish relations?

It is not yet clear whether the incident will tarnish Israel-Turkey relations in light of the fact that Erdogan’s regime, to which Israel acknowledged in official announcements, has in fact abducted two Israelis or whether the liberation will actually open a new channel of dialogue.

The Oknin couple were released from the Turkish prison in the early hours of the night, landed at Ben Gurion Airport shortly after 6 o’clock and hugged the family members. Upon arriving at their home in Modi’in, the two said: “We are fine. Thank you all. Thanks to the Blessed One we are here. Thank you to the government and the prime minister, thank you to Foreign Minister Yair Lapid and the Foreign Ministry. Thank you to President Herzog and to all the people of Israel, to all who supported and helped. ”

The Oknin rebels said in a first conversation with N12 from the balcony of his house: “We have leaders who know how to deal with problems. The Turks treated us just fine, thank them for their cooperation.”

Shiraz, Natalie’s daughter, said after the couple’s release: “We are at the height of our excitement, in the clouds. Thank you for our wonderful country and have been with us all along. Thank you to the Turks who released them and to everyone who stood by us. The Prime Minister and Foreign Minister thanked the Oknin family for “firmly adhering to the complex situation and for open and warm cooperation with the Foreign Ministry.”

Bennett and Lapid spoke with Shiraz and Eran, Natalie’s brother, who were waiting at Ben Gurion Airport for the couple to land. Bennett turned to Shiraz: “It’s great to talk to you again. You see, I told you we do everything, and we really did everything. You were a great partner. Family restraint was very essential these days. Give a hug in my name to the little horizon. Here, Mom and Dad are back home. I hope you have calm days now. I’m glad they’re coming back to you. ”

Foreign Minister Lapid continued: “Shiraz, Eran and the whole family – you are amazing. I am excited with you, we accompanied you all week, we promised that we will do everything to bring them back to you and here they are on the way home. Hug them tight from us too.”

Lapid called the family members to announce the move yesterday at 16:40. The fear was that if even a hint of the impending release was published, the family members would not board the flight and therefore the matter was kept a complete secret. The two were released from prison in the early hours of the night and handed over to consulate and State Department officials. The rebels and Natalie were accompanied to Israel by a private plane of the Ministry of Foreign Affairs, the head of the consular division, Rina Dvir, and the head of the human resources division, Haim Levy.

One thought on “Institutional Involvement and Compensation for Erdogan: The Open Questions in the Detention Case”