Migrants: German elections lay down the law. Yes to Turkey, no to transfers 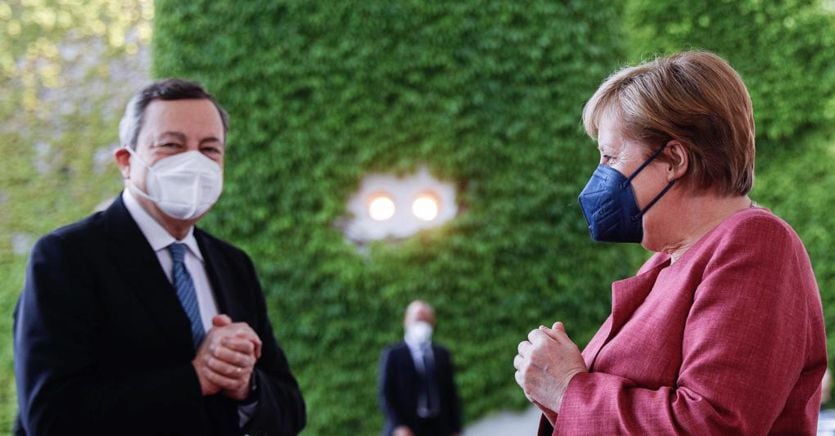 Behind the smiles, compliments and jokes on football from German Chancellor Angela Merkel and Italian Prime Minister Mario Draghi, a delicate game was played in Berlin on the future of the migrant dossier in Europe. Which, unlike football, does not find us clearly winning. If Draghi fears an increase in landings in Sicily for the summer that could give voice to the criticisms of the Brothers of Italy and also from Salvini’s League, to guide political decisions in this phase are the German and French elections of the next year. Two events that are badly reconciled with the needs of Southern European countries such as Italy, Spain and Greece to see the burden of distributing migrants rescued at sea shared.

The Italian premier knew very well that terms such as “landings” and “relocation” should be banned from the meeting and dinner with the chancellor. Any economic migrant who sets foot on German soil in the coming weeks will only strengthen the ranks of the Afd nationalist right (as will happen in France with the followers of Le Pen in view of the 2022 presidential elections). Merkel certainly does not intend to run this risk despite her love for Italy and esteem for the current premier while she will ask (and certainly will obtain) from the other partners a new financial commitment for Turkey which has welcomed 3 million migrants. At the European Council next Thursday and Friday, attention will shift from the question of landings to departures and on the refinancing (still not clear under what conditions) of ESAO, the European office for asylum support. “We will have to work together and help each other and this is the direction in which the two Italian and German governments are working,” says Draghi.

At the EU Council on Thursday interventions only for departures, not for landings

But the requests of the countries of the South will inevitably have to give way to political and economic actions on the side of departures. Economic interventions and incentives in favor of countries of origin and transit, assisted repatriation agreements also with IOM and UNHCR funds and projects. An approach of which there is also some trace in the statements to the press made by Draghi and Chancellor Merkel, committed above all to showing themselves united and divided, possibly, only by football. There was no talk of landings but not even of secondary movements also because during the Covid the return to Italy from France and Germany of the so-called “dublinants” has stopped and now there is a risk that the mechanism could resume to the detriment of our country.

Relocation? For Draghi, the negotiations will take some time

On the merits Draghi explains: “We have close views on what is called the external dimension, that is, greater presence of the EU in North Africa, not only Tunisia and Libya but also those countries where most of the immigration now comes from, namely Sahel, Mali , Ethiopia, Eritrea. The EU needs to be more economically felt also in the form of technical assistance ”. «But the relocation?», They ask Draghi who replies: «We are discussing the reallocation mechanisms, the negotiations will take some time but there is a great desire for a joint vision and mutual benefit». The chancellor offers her point of view: “On migration policies – she observes – Germany and Italy have different situations: Italy is a country of arrival, while we are affected by secondary movements but we are completely in agreement on how to manage the phenomenon: it is necessary to start from the countries of origin and illegal immigration must be replaced by legal immigration ».

As for Turkey, Merkel explains that «we must open a perspective on the future, Turkey has every right to be supported because it welcomes more than 3 million refugees. We cannot go on without cooperation with Turkey ”. And Draghi agrees on the renewal of the agreement with Ankara (6 billion euros) on cooperation for the immigration dossier. Merkel appreciates the Italian efforts for stabilization in Libya, remembers that the Berlin process will continue and a new meeting at the level of foreign ministers is scheduled for tomorrow.