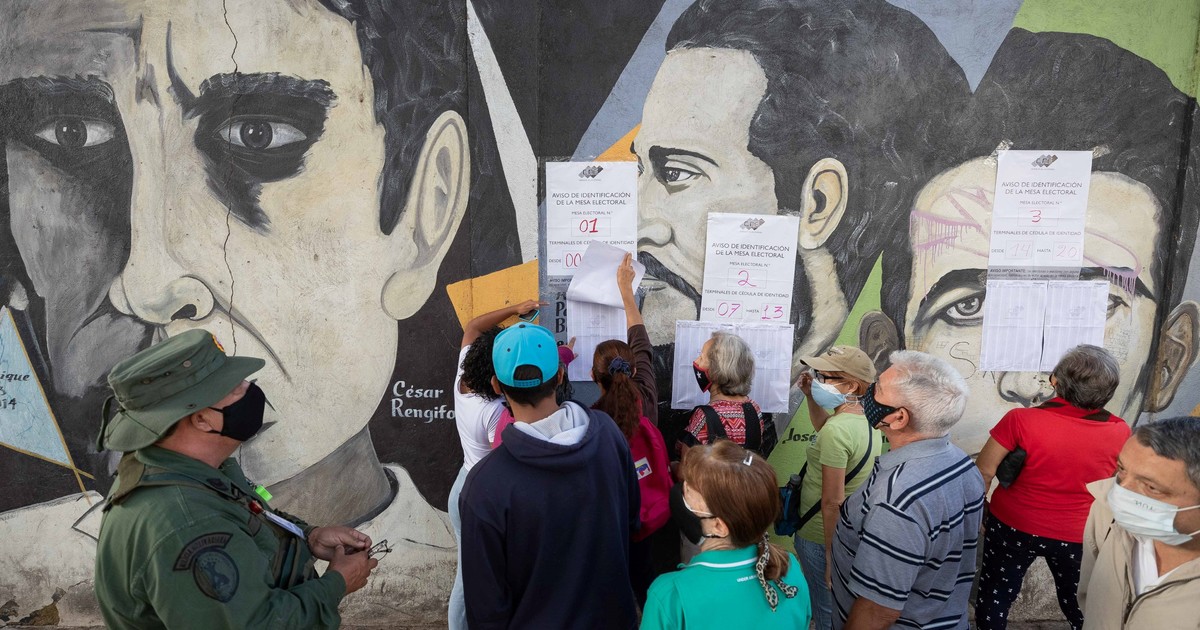 Venezuela elect governors and mayors this Sunday with the participation of the bulk of the opposition, which breaks years of electoral boycott and calls for abstention, in a process that also brings the return of international observers after more than a decade of absence.

21 of the 30 million inhabitants of the country are summoned to the polls to choose 23 governors and 335 mayors, as well as regional and municipal legislators, among more than 70,000 candidates.

Voting opened at 6 and must last until 6 (19 in Argentina), as long as there are no voters in line. The span is usually extended and results do not arrive until well into the morning.

There were centers in Caracas that already had small rows even before opening. Some voters wore jackets in the colors of the Venezuelan flag.

“I am going to exercise my right to vote in a democratic country”José Casanova, a 74-year-old Chavez militant, told AFP before voting at a school in the gigantic neighborhood of Petare. “Each election is for the good of the country, which is a blessed country, with all its problems, but we deserve to be respected.”

These elections can serve as new starting point both for President Nicolás Maduro, who seeks the lifting of international sanctions, and for the opposition, which returns to the electoral route with its sights set on a “transparent” and “fair” presidential election in 2024, although next year it will have the option of a referendum to revoke the mandate of the ruler.

But the opposition returns fractured, weakened and without unitary candidacies in most regions, and it is “foreseeable that Chavismo will sweep away,” estimated Pablo Quintero, political scientist and director of the LOG firm.

The opposition refused to participate in the 2018 presidential election, in which Maduro was reelected, and in the 2020 legislative elections, in which the ruling party regained Parliament.

Both processes, between accusations of “fraud”They were widely rejected internationally, led by the United States and the European Union (EU), which this time will accompany the voting with a mission of 130 observers deployed in the country.

The EU had not been working on an election in Venezuela for 15 years, since the Venezuelan authorities opted for “accompaniment missions” of countries and organizations close to Chavismo. Panels of experts from the United Nations and the Carter Center were also installed for this election.

With the image of Hugo Chávez in the background, a line to vote in Caracas. AFP photo

“International observation is positive and important, validates the process“explained Luis Vicente León, director of the Datanálisis polling company.” It legitimizes it or it illegitimate it, we don’t know what they end up seeing. “

The EU is scheduled to present a preliminary report on Tuesday. Maduro has warned that the block you cannot “give a verdict” on the results.

Target of international sanctions, including a U.S. oil embargo, the government of Venezuela have funds blocked abroad and wants to sell its oil without restrictions, as well as import gasoline, scarce in the face of the destruction of the industry.

Mature, what maintains that these measures are the cause of the country’s many problems, made certain concessions such as promoting a new directive of the National Electoral Council (CNE) with the presence of the opposition, although it is still dominated by Chavismo, and authorized the arrival of international observers.

“This is how decisions are made: With elections, not with sanctions! “, said Adosely Muñoz, 47, also a voter in Petare.

The opposition leader Juan Guaidó, recognized as interim president of Venezuela by fifty countries, although in practice Maduro exercises control, will not vote, according to his team, although he does not call for abstention on this occasion.

“There are no conditions for a free and fair election in Venezuela”, insisted the leader, whose position has the backing of Washington, his greatest ally.

Guaidó’s goal is a presidential election in 2024 or earlier, through the recall referendum next year, which can be defined at the negotiating table in Mexico, which for now is stopped.

But in the face of divisions, the opposition must “organize itself and not start its campaign at the last minute,” Quintero insisted. “The opposition unites and Chavismo trembles.”