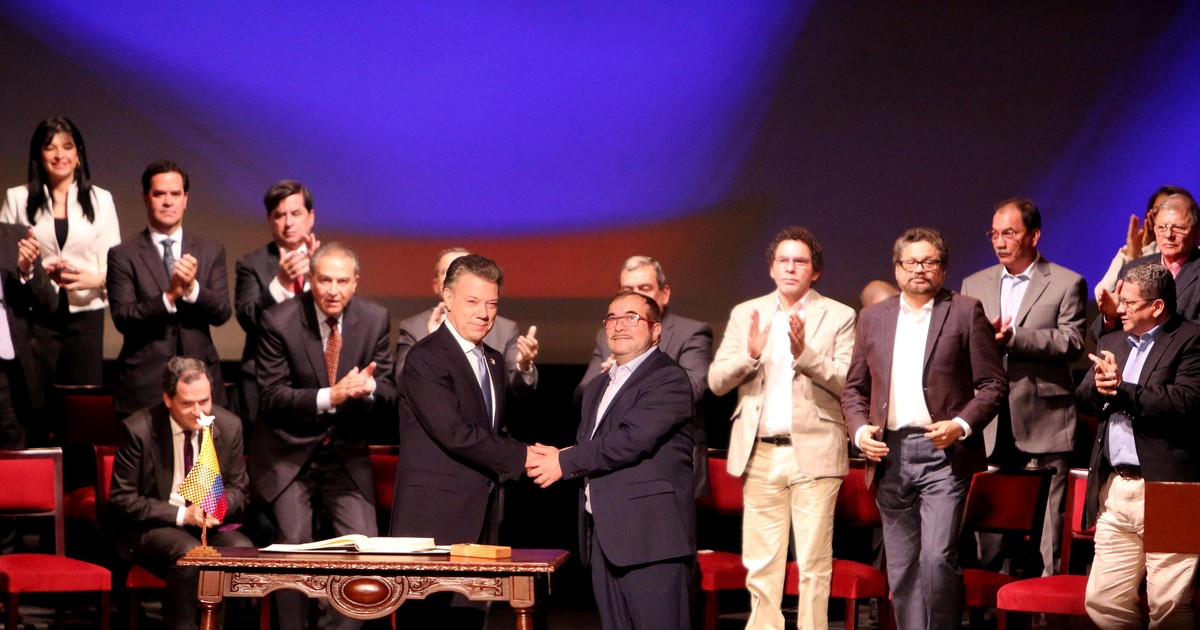 The peace that applauded the world, divided a country and disarmed the guerrillas America’s most powerful turns five. And although the violence and drug trafficking continued without the FARC, today Colombia is a country in turmoil but with fewer victims.

Teatro Colón in Bogotá, November 24, 2016. Juan Manuel Santos and Rodrigo Londoño, the first a liberal president who won the Nobel Peace Prize and the other a peasant with Marxist ideas at the head of a rebel army of 13,000 men and women, They sign a 310-page text in a sober environment with cut-out smiles.

The agreement that was negotiated in Cuba contains political and agrarian reforms -the ownership of the land triggered the conflict-, formulas against drug trafficking and the promise of justice for hundreds of thousands of victims.

But just over half of Colombians opposed in a plebiscite prior to signing, which forced the pact to be adjusted and plunged the country into polarization.

The Revolutionary Armed Forces of Colombia (FARC) finally handed over their rifles to the UN, ending half a century of failed and bloody power struggle.

And while they are now an inconsequential political force, peace made way for a society more active in protest.

The agreement did not extinguish the violence but it has saved many lives. Juan Carlos Garzón, researcher at the Ideas for Peace Foundation, illustrates this: Before 2012, when the dialogues began, lThe annual homicide rate was 12,000 a year.

Hernando Gómez Buendía, director of the Razón Pública portal, reveals a more accurate data: Every year some 3,000 people died from the conflict and in 2017 there were 78.

But once again, homicides are on the rise, Garzón points out: “The bad news is that between January and September 2021 we are again at a level of 10,500 homicides,” he adds.

Although the bulk of the FARC demobilized, active dissidents and the guerrillas of the National Liberation Army (ELN) returned to the offensive after a failed peace attempt.

Drug trafficking also has its own armies. All illegal forces there are about 10,000 combatants, according to the Institute of Studies for Development and Peace.

The “vacuum of power and regulation was filled by other actors”Garzón explains, adding another factor: the inability of the State to “offer guarantees of protection” to the population.

In these five years, 293 former combatants have been assassinated by their former companions or enemies of the war, while others returned to arms. And at the center of all violence: drug trafficking.

The agreement, which promoted the voluntary substitution of illegal crops, did not affect the business: Colombia continues to produce and export cocaine in record numbers.

The victims are at the center of the deal. They are more than nine million between dead, wounded, disappeared and displaced.

The FARC accepted the Special Jurisdiction for Peace (JEP), which also opened the door to paramilitaries and state agents implicated in serious human rights violations. In exchange for them confessing their crimes, they make reparation to the victims and do not repeat offenders, they will be able to evade jail.

“The peace process has served the perpetrators, while the victims who caused the FARC has not complied with them“, denies the general of the police Luis Mendieta, hostage for almost 12 years.

The officer feels excluded from the “peace institution” which, in addition to the JEP, includes a truth commission and a unit to search for the disappeared.

The judges prepare their first sentences against the former rebel command for more than 21,000 kidnappings, while the military will have to answer for the murder of 6,400 civilians presented as guerrillas killed in combat between 2002 and 2008.

“We are complying, because we are appearing before the JEP (…) but it was a war of more than 50 years and to solve it in one or two or three it will not be possible “, affirms the ex-guerrilla and senator Sandra Ramírez.

End to the conflict. AFP photo

The Communes party of the former guerrillas was punished at the polls and the right wing that most opposed the pact reached the presidency with Iván Duque, who tried in vain to modify what was agreed.

“We are faced with a fragile processl (…) because coca had grown exponentially “and the peace signatories” returned to criminal life, “the president told AFP.

The former FARC, who accuse Duque of torpedo the convention and to promote peace only before “the microphones”, they have a minimal representation in Congress on account of the negotiation.

And in the middle is advancing a protest movement led by young people who barely knew about the internal war.

In the last two years, millions have taken to the streets, despite police repression.

“The change was so great, that silencing the rifles allowed Colombian society to see the thunderous noise of corruption, the enormous inequality that we have,” Senator Ramírez concedes.