Rain of money: Thousands of bills flew from an armored truck in the middle of the road 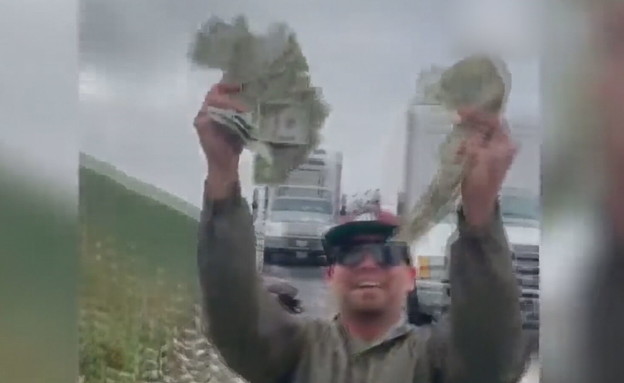 Rain of money: It initially looked like the lucky day of dozens of drivers on the highway in San Diego, California. The back door of an armored truck carrying cash from a local bank suddenly opened, and sacks of money, literally, rolled out. As greenish bills flew in all directions, the excited drivers got out of the cars and began to pick up everything next door. In most cases these were bills of no more than $ 20.

“This is the craziest thing I’ve ever seen!” “Someone dropped money all along the freeway. San Diego has been shut down, she’s rewarded has been shut down, look at the road now. My God!” Travis Fisher, a San Diego resident who witnessed the incident, said “people were celebrating and shouting ‘this is money, this is money’, and they would walk around and take with both hands.”

The policemen who were called to the scene tried to collect as many bills as possible into garbage bags before it was too late. “We’re currently working with the FBI, this is a joint investigation,” said Curtis Martin, of the San Diego Police Department. “If anyone has taken money, we ask that you hand it over immediately to the Vista Highway Police Office.”

Anyone who does not return the money within 48 hours risks an indictment, police warn. Two unlucky young men whose car was locked while collecting bills have already been arrested. Ironically, those videos that made many people come and look for the money may be the ones that will complicate them with the law.