On the eve of the signing of the Treaty, two.hour bilateral between Draghi and Macron 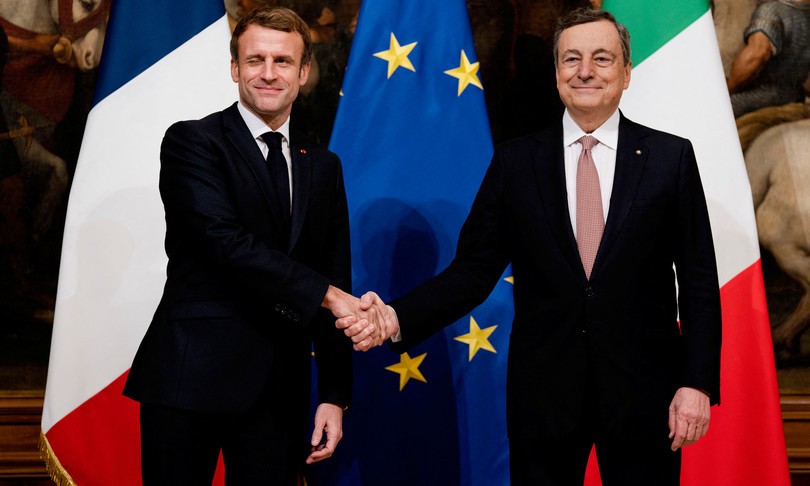 – The president of Mario Draghi Council welcomed French President Emmanuel Macron to Palazzo Chigi. After a face-to-face meeting between the two which lasted about two hours, the meeting was extended to include ministers and delegations. Today the signing of the Quirinal Tarttato and immediately afterwards the premier and the French president will release statements to the press at Villa Madama.

The treaty that unites the two countries

The Quirinal Treaty – they explain at Palazzo Chigi – is the result of a long and complex negotiation commitment, continued throughout 2021. It is aimed at strengthening the bilateral relationship between Rome and Paris, through a dialogue between administrations, periodic consultations and the identification of a common agenda with major shared themes and priorities. This cooperation – it is reported – is placed in the European reference framework, mentioned several times in the text starting from the preamble, with a view to a strengthening of the EU and its capacity for international action, as well as for the joint promotion of priorities common to the two countries. The shared themes include strengthening the European Union, common commitment in the Mediterranean and in Africa, digital and environmental transitions, security, culture and education, economic and industrial cooperation, cooperation in the space sector, relations between the respective civil societies and cross-border cooperation.

Ministers present at the bilateral

The Ministers present at the enlarged bilateral agreement with President Draghi and President Macron at Palazzo Chigi are for Italy: the Foreign Minister Luigi Di Maio, the Interior Luciana Lamorgese, the Defense Lorenzo Guerini, the Economy Daniele Franco, the Development Giancarlo Giorgetti, the undersecretary for EU policies Enzo Amendola. On the French side there are the Foreign Minister Jean-Yves Le Drian, of the Economy Bruno Le Maire, of the Defense Florence Parly, of the Interior Gerald Darmanin, the Undersecretary for European Affairs Clement Beaune.

The meeting with Mattarella

Before meeting with Draghi, the President of the French Republic Emmanuel Macron went to the Quirinale where he was welcomed by the President of the Republic Sergio Mattarella. The two presidents, both wearing masks, exchanged a hug and listened to the national anthems, then went up to the noble floor of the building for the tete-à-tete interview.

The evening ended with a courtesy dinner. Mattarella hosted Macron and his delegation, Prime Minister Mario Draghi and the Italian delegation.

“The signing of the treaty for enhanced bilateral cooperation is an important result, a far-reaching text. It is a treaty that unites two founding countries of the European Union that share the commitment to build the great European project”. Thus Sergio Mattarella during the face-to-face conversation with President Macron on the eve of the signing of the Quirinal Treaty.

“An important result, a wide-ranging text”. Sergio Mattarella blesses the Quirinal Treaty between the governments of Italy and France and dispels the doubts of those at home and in Brussels who fear the new axis between Rome and Paris.

“The signing of the treaty for one enhanced bilateral cooperation is an important achievement, a wide-ranging text. It is a treaty that unites two founding countries of the European Union that share the commitment to build the great European project “assures the Head of State. Which he notes as” a stronger relationship between Italy and France contributes to building a more strong, all the more necessary today in the face of challenges that only a more integrated Europe can face, as the pandemic crisis has highlighted “.

“The many measures envisaged to strengthen dialogue and cooperation and stimulate joint initiatives they are an investment in the future commonality of Italy and France “assures the Head of State.

In recent days requests were received from the opposition to be able to examine the text before signing, but the process of the treaties requires Parliament to ratify the pacts signed and the government has already announced that it will present itself to the Chambers to illustrate the agreement. Both from the Quirinale and from Palazzo Chigi it is emphasized, among other things, that the agreement between Rome and Paris does not weaken Europe, rather it is placed within the Community reference framework.

“The strengthened cooperation between Italy and France must also have the objective of bringing the necessary ambition within the European Union”, explains Mattarella. Why “the European dimension it is the key element in a phase in which we are called to overcome the crisis linked to the pandemic and to restart with renewed enthusiasm to successfully face the great challenges of the ecological and digital transition “.