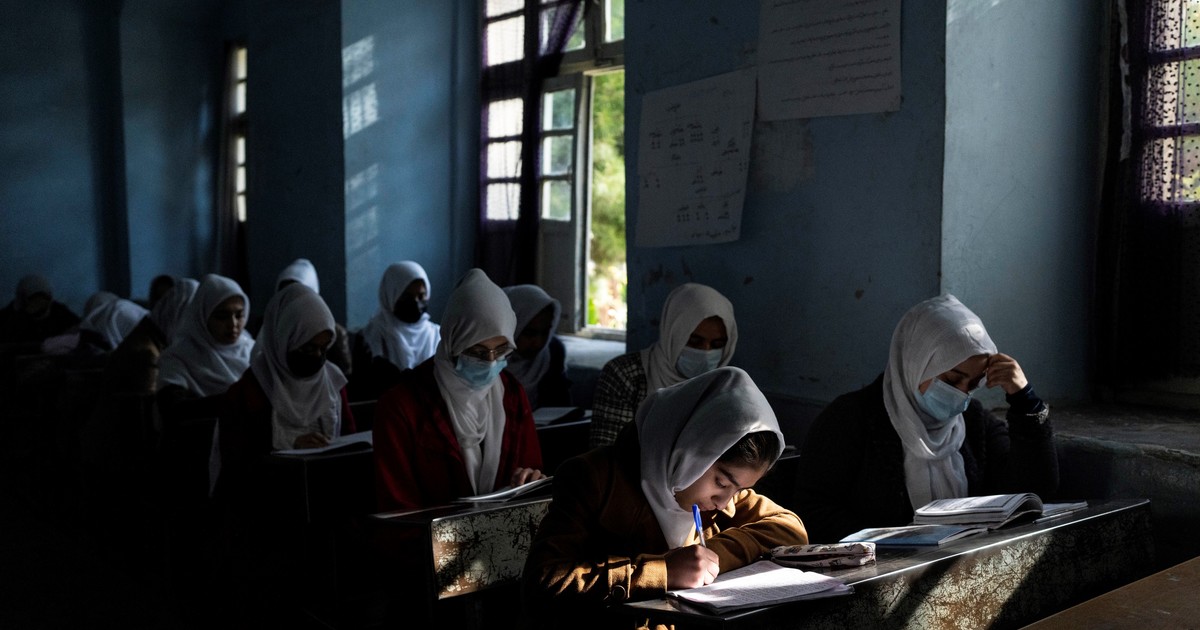 In most of Afghanistan, high school girls stay home as the Taliban rulers banned them from attending classes. But there is one big exception.

For weeks, young women in the western province of Herat have returned to school classrooms, the fruit of a unique and concerted effort by teachers and parents to persuade local Taliban officials to allow them to reopen.

The extremist regime that took power by force in August never formally approved the reopening after the pressure campaign. But it didn’t stop it either when teachers and parents in that region started classes on their own in early October.

“Parents, students and teachers joined hands to do this,” said Mohammed Saber Meshaal, head of the Herat teachers union who helped organize the campaign.

“This is the only place where community activists and teachers risked staying and talking to the Taliban,” he added.

The success in Herat highlights a major difference between the current Taliban government in Afghanistan and the previous one in the late 1990s.

Back then, the militants were adamant in their hard-line ideology, banning women from public life and work and all girls from education. They used force and brutal punishments to enforce the rules.

A secondary school for girls in the city of Herat. An exception in Afghanistan. Photo: AP

This time around, they seem to acknowledge that they cannot be so ruthless in an Afghanistan that has changed dramatically in the last 20 years.

They imposed some old rules, but were ambiguous about what is allowed and what is not. The ambiguity could be aimed at avoiding alienating the public as the Taliban fight an economic collapse almost total, the closure of international financing, an alarming increase in hunger and the dangerous insurgency of ISIS militants.

This left small margins in which the Afghans can try to fight back.

When the Taliban took power in August, most schools were closed because of Covid-19.

Under strong international pressure, the Taliban were quick to reopen schools for girls in grades 1-6, along with schools for boys at all levels.

But they did not allow the girls in grades 7-12 to return, saying they must first ensure that classes are conducted in an “Islamic way.”

The Taliban also barred most women from government jobs, their main place of employment.

In Herat province, however, teachers began to organize quickly.

“When the Taliban arrived, we were very concerned about all of the above,” said Basira Basiratkhah, director of the Tajrobawai women’s school in Herat, the provincial capital.

Officials from the teachers’ union met with the Taliban governor and the head of the education department.

They did not initially raise the issue of girls’ schools, but instead focused on establishing a relationship until “the Taliban saw that we represented the community,” Meshaal said.

When the teachers called for the reopening, Taliban officials objected, saying they could not allow it without an order from the Kabul government.

Teachers they kept pressing. Some 40 female directors, including Basiratkhah, met with senior Taliban education officials in September to address their top concerns.

“We assure them that the classes are separate, with only female teachers, and that the girls wear the proper hijab (veil),” Basiratkhah said. “We don’t need to change anything. We are Muslim and we already observe everything that Islam requires.”

A teacher teaches a group of girls at a secondary school in Herat, Afghanistan. Photo: AP

Telephone chain and movement in the networks

In October, the teachers felt they had the tacit agreement of the Taliban not to get in the way. The teachers began to spread the word on Facebook pages and messaging app channels that girls’ schools would reopen on October 3.

The parents created a telephone chain to transmit the news, and the students communicated it to their classmates.

Mastoura, who has two daughters who attend Tajrobawai in first and eighth grade, called other parents, urging them to take their daughters to school.

Some feared the Taliban would harass the girls or that the militants could attack them. Mastoura and other women continue to accompany their daughters to school every day.

“We had concerns, and we continue to have them,” said Mastoura, who like many Afghans uses only one name. “But daughters must get an education. Without an education, their life slows down.”

Fadieh Ismailzadeh, a 14-year-old in the ninth grade, said she cried with happiness at the news. “We had lost all hope that the schools would reopen,” he said.

Not all of the female students showed up when the doors opened in Tajrobawai. But as parents grew more confident, classes filled up within days, Basiratkhah said. There are about 3,900 female students between 1st and 12th grade.

“We openly tell everyone that they should come to school,” Shehabeddin Saqeb, director of Taliban education in Herat province, told reporters. The Associated Press.

“Schools are open without any problem. We have never issued an official order saying that girls of school age should not go to school,” he added.

Herat is the only place where secondary schools for girls are open across the province, although they have also opened some in individual districts in northern Afghanistan, including the city of Mazar-e Sharif.

Meshaal noted the changes that have occurred within the Taliban, and stated that some factions are more open. “They understand that people will resist on the issue of education.”

He claimed that the Taliban are not corrupt, unlike the ousted government backed by the international community.

“With the previous government, if we proposed something for the good of the schools, they would throw the idea away because they could not take advantage of it,” he argued.

“The Taliban spent all their time in the mountains fighting. They don’t know the administration. So when we meet with them, we try to advise them and after the negotiations they begin to see reason,” he said.

Still, teachers struggle. Like other public employees, They have been unpaid for months. The education department has not provided funding for other needs such as maintenance and supplies, Meshaal said.

And the opening of a girls’ school in Herat remains an exception. Other parts of the country were less successful.

Teachers in the southern city of Kandahar approached local Taliban officials to reopen girls ‘schools, but they were denied, complained Fahima Popal, director of a girls’ school.

A class for girls in a school in Afghanistan. Photo: AP

Officials said they could do nothing without orders from the central Ministry of Education. Meanwhile, parents ask when their daughters will be able to return to class.

“We hope that one day we will have good news for them,” Popal says. But he believes it is better to wait for the central government to act rather than repeat the Herat experiment.

If provincial authorities allow the reopening, the ministry could reverse its decision, which “would harm female students and teachers,” he said.

The full return of the girls is one of the main demands of the international community and probably must take place before UN agencies agree to pay teachers’ salaries directly.

So far the Taliban have refused to set a timetable and most schools are starting a winter break until March.

In a speech on Saturday, Taliban Prime Minister Mohammed Hassan Akhund insisted that “women are already receiving education.” And he only added: “There is hope to expand it, if God allows it.”