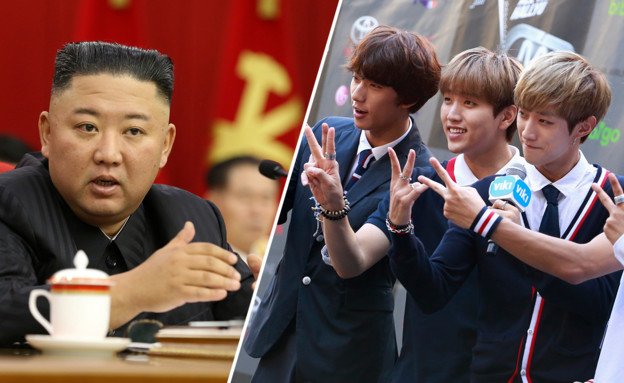 The people of North Korea, who are currently struggling with severe hunger, were already accustomed to surveillance by the authorities – but the regime has found a new enemy. Six children were recently dragged to a North Korean court while chained, and have appeared to have undergone a very difficult interrogation since their arrest. The children were found guilty of a felony: watching movies and TV series from South Korea in the past year, along with their classmates.

According to NK News. The state prosecutor who conducted the public trial against the three boys and four girls detailed the reasons why they stood before the court: he described the acts as “serious crimes”. The children were sentenced to five years in one of the infamous education camps. The North Korean media claim that these teens were lucky, because the “crimes” for which they were convicted usually carry a sentence of “life imprisonment of re-education through work” – or worse, execution.

The surprising goal of media researchers: the word “baby”

North Korean police officers, those who scan computers, text messages and music players in search of subversive content, have recently been focusing on a new and surprising target: the word “baby.” The seemingly innocent term is perceived as a threat to Kim Jong Un’s rule: young North Koreans have found new ways to learn what’s going on in the world around them, and the closed country is responding with dramatic steps.

The Asia Press newspaper reported that women in North Korea are forced to call their spouses a “friend” on a date, Comrade. After hearing the expressions in the K culture, which comes from the neighbor from the south, they started calling their spouses “baby” in Korean – OPPA, but Kim’s people recognized the problem – and claimed it was a word of perverts. Anyone who uses these words can find themselves today in a re-education camp.

These are not the only new repressive measures against the culture that has become a danger to the dictator: Kim Jong Un is going into battle again, facing a new enemy. This time it’s not the United States, nor China, nor South Korea’s army – it’s a beggar’s hell. This is how North Korea calls the sister from the south. Through the songs and dramas provided by the K culture, first smuggled onto tapes and CDs, young people in North Korea have learned that while they struggle to find enough food to stop hunger, their neighbors in the south are dieting to lose weight.

Today, South Korean entertainment is smuggled on drives from China: young North Koreans are watching this entertainment, which has become underground, behind closed doors and shuttered windows. Kim Jong Un said the Western influence is a “cruel cancer” that corrupts the “dress, hairstyles, speech and behavior” of the young people in his country. State media have warned that if the North Koreans do not abide by the rules, the country will “crumble like a damp wall”.

The prominent faces in this struggle are not soldiers or statesmen, but the faces of young South Korean bands that have won the hearts of fans around the world and also in North Korea. The New York Times argues that the growing influence of the BTS band for example is what led the leader of the totalitarian state to declare a “new culture war” to stop it.

The dictator mobilizes every possible tool – media, state and legal – against the “anti-socialist” influence that has spread in his country. The struggle is particularly focused on South Korean films, dramas and pop videos: censorship is nothing but a tantrum of a dictator. To isolate the country, North Korea has introduced a new set of laws designed to erase and invalidate any foreign influence. Authorities severely punish citizens who watch foreign movies, wear Western clothing or even use Western slang.

“Young North Koreans think they owe nothing to Kim Jong-un,” Yong Guang-il, a North Korean defector who runs a network that smuggles entertainment to North Korea, told the New York Times. “He must return his ideological control to the young if he does not want to lose the basis for the rule of his family dynasty.” The cultural battle comes at a time when the North’s economy is confused and its diplomacy with the West has stalled, perhaps leaving the country’s youth more open to outside influence and challenging Mr Kim’s firm grip on North Korean society.

Kim’s family has ruled the north for three generations, and the regime maintains a blind loyalty to the residents – even during crises such as the famine in the late 1990s in which millions reportedly died. Last week, Kim announced that the “food situation in the country is serious” – and the country is apparently heading for another disaster, while the residents are really discovering what the authorities are hiding from them.

K-POP, Korean pop, is a musical genre that grew up in South Korea and is heavily influenced by Western pop – but with special and catchy elements. One of the old and familiar examples of the genre is the global hit Gangam Style, which swept billions around the world even without them understanding the lyrics. In recent years, the phenomenon has only been expanding, and is becoming known all over the world.

The most successful K-POP band in the West is BTS – a reputed boy band that manages to screw up with MTV and Western culture as well. Beside her there are also bands of girls like BLACKPINK, which are very successful. Some argue that the industry encourages a “Western look” that obscures the Asian look of the youth stars. In a survey conducted by a university in South Korea among 116 people who fled the north in 2018 and 2019, half of them said they had heard and occasionally seen series and heard South Korean songs.

In the past Kim seemed more flexible towards world culture: in 2012 North Koreans saw him on TV raising his thumbs as a sign of joy, towards a group of girls in miniskirts playing the theme song from “Rocky” while Mickey and Minnie Mouse characters danced around. Kiosks in Pyongyang sold Disney movies like “The Lion King” and “Cinderella,” and restaurants featured foreign movies, concerts, and TV shows. But this open approach did not last long.

Kim’s confidence weakened after the failure of diplomatic moves with Donald Trump, the former US president. The seemingly hearty and heated negotiations were interrupted in 2019 without removing the crushing sanctions on the North. Since then Kim has vowed to lead his country through the sanctions by building an “independent economy” that is less dependent on trade with the outside world. The economic troubles of the north.

Kim recently admitted that the food situation in North Korea is “tense” – a statement that has raised concerns about the fate of the country’s citizens who suffered a devastating famine just about two decades ago. North Korea, which does not enjoy food security (or other security), is a very poor country: it is subject to numerous international sanctions because of its nuclear weapons programs and the ballistic missile program it promotes and invests in disproportionate huge budgets, especially in light of chronic food shortages. To residents.

At the plenary session of the Central Committee of the ruling Workers’ Party in Korea, Kim admittedly said that the economy was growing, with industrial output growing by 25% over the previous year, but the North Korean leader admitted there were a “series of deviations” due to a number of challenges. “People feel food shortages because the agricultural sector has failed to implement its grain production plan after the damage caused by typhoons last year,” he said.

And not only is food lacking: Pyongyang has poor medical infrastructure and a shortage of medicines, the outbreak of the corona virus has brought the country to its knees, Pyongyang imposed a “strict lock” in January to stop the spread of the virus from neighboring China, and the administration insisted there were no coronation cases in North Korea. Either way, the citizens of the country paid a huge price for the siege imposed on them by the Kim administration.

Trade with China, the North’s economic lifeline, has slowed to a minimum, all international aid work is halted in the face of local rigid restrictions, the country, which is also isolated – is even more isolated today, and North Korea’s humanitarian situation has made its 10.6 million The United Nations Office for the Coordination of Humanitarian Affairs (OCHA) in another statement reflecting the plight of the north, Kim told citizens last April that the country was in “the worst situation ever.” But the leader does not change his ways: the suffering of his people does not make him open to aid. – On the contrary, it tightens the belt and tries to eliminate any kind of foreign influence.

Ion Mi-su, a defector who now lives in Seoul, South Korea, told the BBC that when she was 11, she first saw the execution of a man who was watching a South Korean drama series. “If you had not done so, do not deserve to watch the execution, it would have been defined as treason,” she recalls. The North Korean regime made sure everyone knew that the penalty for smuggling banned videos was death. “I have a strong memory of the man who was blindfolded. I can still see his tears flowing. It was traumatic. The blindfold completely absorbed the tears – they tied him up and then shot him.”

North Koreans live without the Internet, without social media, and with some state-controlled television channels designed to tell only what the country’s leaders want their citizens to hear. Now Kim Jong Un is leading a sweeping new law against what the regime defines as “reactionary thought”: Anyone caught buying or distributing media from South Korea, the United States or Japan is now facing the death penalty. Anyone caught watching materials may be sent to a re-education camp for 15 years.

But it’s not just about entertainment and media: Kim wrote to state media and called on the country’s youth to refrain from “unpleasant, individualistic, anti-socialist behavior among young people.” By doing so he intends to stop a foreign speaking style, hairstyles and clothes he described as “dangerous poison”. To counteract this influence, the new “Law of Thought” gives authorities the power to undermine what they see as foreign haircuts, foreign fashion and foreign slang.

A group of psychiatrists whose conclusions were summed up in the 2017 CIA report stated that the young ruler of North Korea is “with a formidable ego who tends to react excessively and sometimes fatally to insults and what can be interpreted as contempt.” Consumption of Western culture as well as that coming from the south seems to have become the highest insult for Kim – and it is possible that the real deadly steps are still ahead of us. 71 years after the beginning of the fighting in the Korean Peninsula, after North Korea launched a surprise offensive, South Korea has become a thriving democratic power. Its invasion includes no forces or nuclear missiles, nor messages of hatred – the south is invading the north at a pop pace.

The North Korean leader exceptionally admits: The food situation in the country is dire

After the Trump-Kim Summits: What has changed in US-North Korea relations?

Who will succeed Kim Jong Un as North Korea’s leader if he dies?