The Girl with the Rifle: The Unusual Christmas Picture of a Congressman Thomas Massie 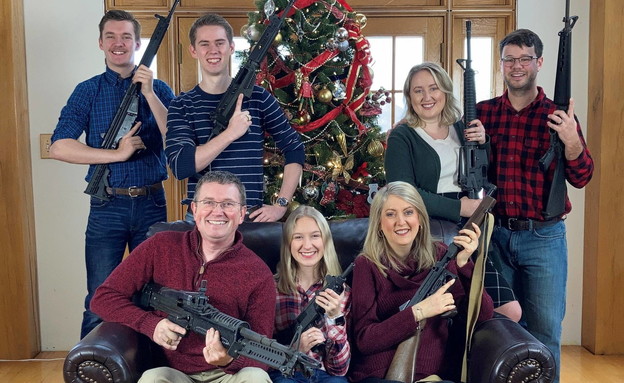 The Extraordinary Celebration of the Member of Congress: Thomas Massie of Kentucky, a Republican representative in the U.S. Congress, has chosen to celebrate Christmas in a slightly unusual way. He posted a smiling family photo on his Twitter account (Saturday), surrounded by a selection of guns. The unusual picture was published only on Tuesday last week Four boys were killed in a massacre at Oxford High School in Michigan.

“Happy holiday, Santa! Please bring ammunition,” a congressman wrote on Twitter. Massie, elected on behalf of the Republican state of Kentucky, is seen in the picture holding an M60 and AR-15 automatic rifle, and another Thompson rifle – along with six other family members.

Thomas Massie’s campaign manager was in no hurry to respond to the storm. Kentucky Democrat Rep. John Yarmuth sharply attacked Massey’s post: “I’m old enough to remember the Republican screams for insensitivity because of trying to protect people from violence as a result of shootings. I promise not every Kentucky resident is an ’emotionless maniac.’ Yarmuth wrote on Twitter, referring to calls to impose restrictions on the possession of weapons.

The Oxford High School massacre in Michigan Performed last Tuesday by Ethan Crumbley, only 15 years old. Crumbley launched a shooting and murdered four students. Six other people, including a teacher, were injured. This massacre has been described as the most murderous this year. ECrumbley‘s parents were arrested yesterday on suspicion of involvement in the incident.