At 101, a sailor aboard Oklahoma recounts the 1941 Japanese bombing 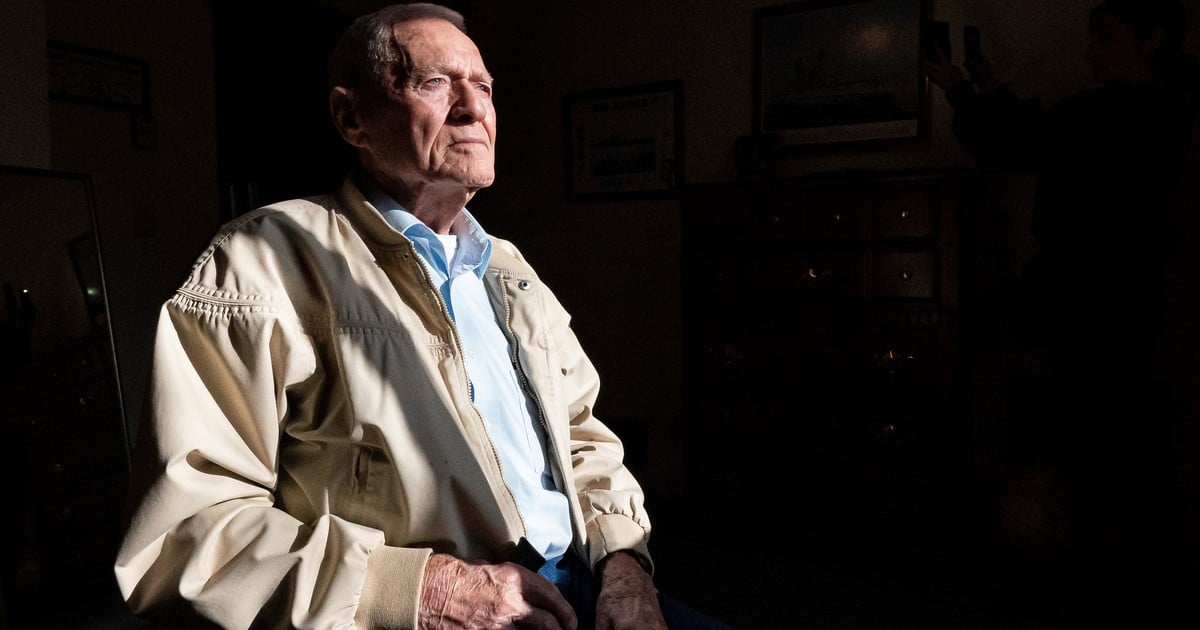 When Japanese bombs began to fall on Pearl Harbor, US Navy Sailor 1st Class David Russell first sought refuge under the deck of the USS Oklahoma.

But a split-second decision on that December morning 80 years ago changed his mind, and probably saved his life.

“They started to close the hatch. And I decided to get out of there“Russell, now 101, said in a recent interview.

In 12 minutes his battleship would capsize under a barrage of torpedoes. Total, 429 sailors and marines of the Oklahoma would perish, the highest death toll of any ship that day, other than the USS Arizona, which lost 1,177.

The hull of the USS Oklahoma sinking alongside the USS West Virginia. Photo: AP

Russell is scheduled to return to Pearl Harbor on Tuesday for a memorial service for more than 2,300 US soldiers killed in the attack on December 7, 1941, which launched the United States into World War II.

About thirty survivors and another 100 war veterans are expected to observe a minute’s silence at 7:55 in the morning, time the attack started.

The survivors, who now they are over 90 years old, stayed home last year due to the coronavirus pandemic and instead watched a live broadcast of the event.

David Russell, 101, poses for a photo alongside a painting of the USS Oklahoma. Photo: Nathan Howard

Remember he headed to the top when the attack started because he was trained to load anti-aircraft guns And he thought he might help if some other loader got hurt.

But the Japanese torpedo planes launched a series of submarine missiles that beat Oklahoma before it could get there. In 12 minutes, the huge battleship capsized.

“Those damn torpedoes, they just kept hitting us and hitting us. I thought they would never stop,” Russell said. “That ship danced from one side to the other“.

Russell clambered over and around the toppled lockers as the battleship slowly tipped over.

“You had to walk sideways,” he said.

Once he reached the main deck, he crawled around the side of the ship and observed the USS Maryland moored alongside. Did not want to swim because the filtered oil burned in the water below. Jumping up, he grabbed onto a rope dangling from the Maryland and escaped that battleship undamaged.

A photo of Russell taken during the war, seen at his home. Photo: AP

He then helped pass ammunition into the Maryland’s anti-aircraft guns.

After the battle, .Russell and two others went to Ford Island, next to the place where the battleships were moored, in search of a bathroom. A dispensary and enlisted barracks had been turned into a triage center and place of refuge for hundreds of wounded, and there they found sailors with horrible burns lined up against the walls. Many would die in the hours and days that followed.

“Most of them wanted a cigarette, and I wasn’t smoking at the time, but I did get a pack of cigarettes and some matches, and I lit their cigarettes,” Russell said. “I’m sorry for those guys, but there was nothing I could do. I just lit them a cigarette and let them puff on them.”

Russell still thinks about how lucky he was. Think about why he decided to climb to the top of the Oklahoma, knowing that most of the men who stayed behind probably couldn’t get out after the hatch closed.

Russell talks about his time aboard the USS Oklahoma and his life after the war. Photo: AP

In the first two days after the bombing, a civilian crew from the Pearl Harbor Naval Shipyard rescued 32 men trapped on the Oklahoma by poking holes in its hull.

But many others perished. Most of those who died were buried in anonymous graves in Honolulu marked “unknown” because their remains they were too degraded to be identified when they were removed from the ship between 1942 and 1944.

The USS Arizona succumbed after the bombing. Photo: AP

In 2015, the Defense POW / MIA Accounting Agency exhumed 388 sets of these remains in hopes of identifying them with the help of DNA technology and dental records. They were successful with 361.

Russell’s brother-in-law was among them. Firefighter 1st Class Walter “Boone” Rogers was in the firing room, which was hit by torpedoes, Russell said. The military identified his remains in 2017, and since then he has been reburied. at Arlington National Cemetery.

Russell remained in the Navy until his retirement in 1960. He worked on Air Force bases for the next two decades, retiring permanently in 1980.

His wife, Violet, passed away 22 years ago, and now lives alone in Albany, Oregon. He drives to the grocery store and to the local American Legion outpost in a black Ford Explorer while listening to loud polka music. When he’s not hanging out with other veterans in the legion, he reads military history and watches television. Have a pile of puzzles of 500 pieces to keep your mind sharp.

For decades, .Russell didn’t share much about his WWII experiences because no one seemed to care. But images of Pearl Harbor still haunt himespecially at night.

“When I was in the veterans hospital, there in San Francisco, they told me, ‘We want you to talk about WWII.’ And I said, ‘When we talk about it, people don’t believe us. They just walk away.’ So now people want to know more about it, so we are trying to talk about it. We try to talk about it, and we tell them what we saw, “he said. “It can not forget”.

The authors are Associated Press journalists