Testimony of residents from the building collapse disaster in Miami 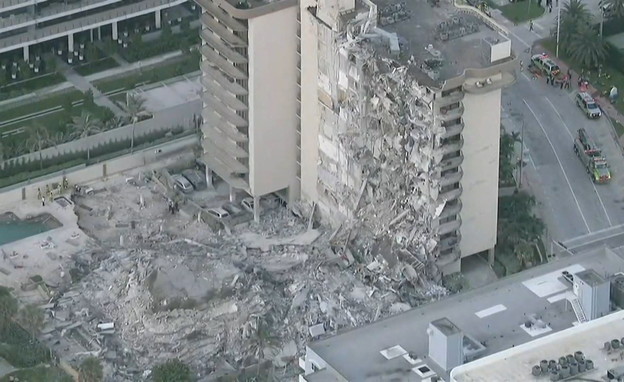 It is not yet clear what led to the collapse of the building in the disaster in Miami last night (Thursday) or how many people were inside. When dawn broke, the extent of the destruction became clear, but rescue teams are still working to rescue the missing. This is a 12-story building with more than one hundred and thirty apartments inside. According to reports in the United States, three people died in the disaster and the number of missing stands at 99. CNN reported that rescuers heard noises beneath the rubble.

Eyal Melamed, a resident of Miami, updated in an interview with the “main edition” near the scene of the disaster: “It turns out that there are one dead and dozens injured, dozens missing, really do not know what is happening. This is a city called Surfside, “Jews. Half of the building just collapsed. It could be, not sure, that it’s because of work that has been done here lately.” According to Eyal, the building is exactly 40 years old and every 40 years an inspection is carried out, “it could really be because they made renovations here and replaced the roof,” Eyal speculates.

Barry Cohen, the tenant of the building that collapsed, said: I walked down the hall and it is a very long corridor. There was nothing there, just a pile of ash and gravel. “Willy Gomez, another tenant, testified:” It’s crazy, you would expect it to happen during an earthquake, but not in that way. I felt the ground shaking and then I heard a sound that sounded like thunder. “

Nicholas Balboa, who was at the scene of the disaster, rescued a child from the rubble. “I heard someone shouting and screaming,” he testified, “so me and another person decided to get closer. At this point I started to hear him better and realized it was the voice of a small child.” Balboa recruited the emergency crews and hundreds of them began working in the arena. The forces operate in an impossible environment, between huge and unstable concrete blocks.

Florida Gov. Ron de Santis also referred to the disaster: “We hope for the best in terms of more recoverers, but we are preparing for the bad news, given the mirrors of destruction.” “I live in Miami Beach, I was born here, and buildings do not just collapse. Never, ever. It’s the most shocking thing I think we’ve ever seen.”