Valentino Rossi gives Mattarella the tricolor helmet with the autograph 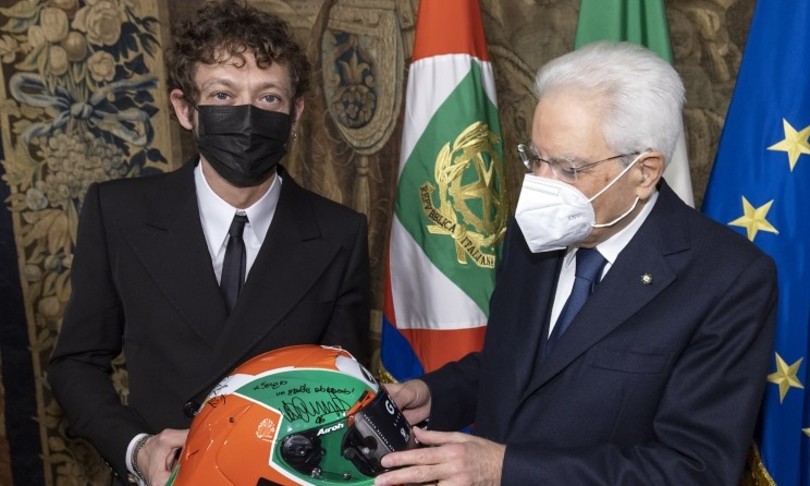 – “A big hug for Sergio”. Valentino Rossi gave the President of the Republic a motorcycle helmet, with the colors of the Italian flag and the words President Mattarella.

Alongside the dedication, the signature of the nine-time MotoGP world champion, received today at the Quirinale together with motocross champion Tony Cairoli and Francesco Bagnaia, accompanied by the top management of Federmoto and Coni.

Valentino Rossi made “a turning point” in the world of motorcycling and in the “way of interpreting it which he sowed not only in Italy, but everywhere. Many new champions have been inspired by his model “, said the Head of State Sergio Mattarella.

“Welcome to the Quirinale, a really great pleasure to welcome you and to congratulate you for your successes”, said Mattarella who thanked the top management of Coni and Federmoto for the activities carried out, because, said the Head of State “It is important to combine sports and social activities“.

This, continued the Head of State, “is a way of honoring and developing the 110 years since the first national motorcycle club and I have lived a good part of them, so much so that I remember the motorcycle champions of many decades ago”.

To Valentino Rossi Mattarella expressed his “compliments not only for this long season and many years of competitions always at the highest levels, but thanks because it was followed with constancy and maximum closeness not only by enthusiasts, but from all over the country with great sympathy and involvement for the sporting and human aspects, having solicited and stimulated many young people to get involved in the sport of motorcycles “.

According to Mattarella Valentino Rossi has “also caused a turning point in the way of interpreting the sport of motorcycles, which he has sown not only in Italy, but everywhere: many new champions have been inspired by his model “.

A success, according to Mattarella, “from the point of view of the sense of sport and the desire to always compete with new goals”.

Extraordinary year of Italian sport is no coincidence

“This was extraordinary for the Italian sport that will continue, but it was not born by chance due to an occasional lucky coincidence, it stems from the fact that for years there has been a great expression of sporting protagonism “. Thus the President of the Republic, Sergio Mattarella, who received the motorcycling champions at the Quirinale including the pilots Valentino Rossi, Antonio Cairoli and Francesco Bagnaia.

Mattarella, after thanking Valentino Rossi, also thanked the motocross champion, Tony Cairoli, protagonist “in a particularly tiring and fascinating sport in the midst of nature”.

That of motorcycling, “is an extraordinary condition, which makes you a point of reference for the young people of our country, and not just the youngest, I also join them”, he added.

“Congratulations for what you represent as the security of leading the way in sport, for what you promise and for what you have achieved and achieved. Team victories are important, of course – continued Mattarella – this is a predominantly individual sport, but the bond of team that is created naturally nourishes the ability and the interpretation of how one moves, of how one fulfills oneself and how one expresses oneself in this sport “.

Mattarella recalled the “quantity of medals” won by the Italian champions and thanked the riders “to ensure a safety perspective for the sport of our country”.

“It was an extraordinary year for Italian sport that will continue, but it was not born by chance due to an occasional lucky coincidence, it stems from the fact that for years there has been a great expression of sporting leadership. These years have transmitted skills, values ​​that this sport in particular collects and transmits. Thank you for what you have done and you will continue to do “, he concluded.