Disaster in Mexico: At least 54 people killed in a truck overturn in the south of the country 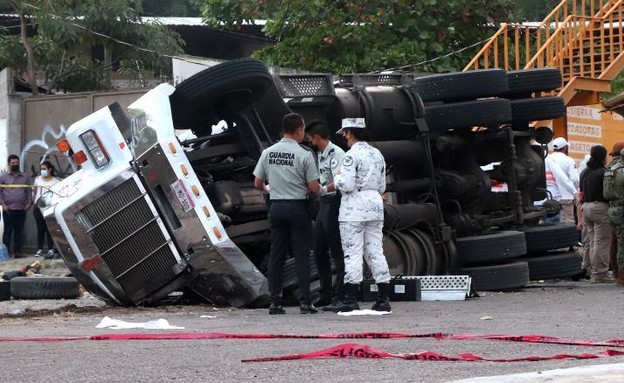 54 people, most of them immigrants from Central American countries, were killed yesterday (Thursday) in southeastern Mexico after the truck they were traveling in overturned. More than 100 more people were injured in the serious accident, and some were evacuated in critical condition to hospitals in the area. Mexican President Andres Manuel Lopez Obrador wrote on his Twitter account: “It hurts a lot. I embrace the families of the victims.”

Lopez Oberdor and his foreign minister Marcelo Everard have confirmed that these are immigrants from Central America. Eberard expressed his condolences to the families of those killed, adding: “We will contact the foreign ministers of the countries involved.”

The circumstances of the accident are still being investigated, as is the reason for such a large number of passengers crammed into the truck. However, migrants’ travels from backward countries such as Honduras, Guatemala, Nicaragua and Salvador often pass through Mexico, and are considered extremely dangerous. The smugglers are trying to move them near the border with the United States, which often ends in disaster – as has happened now.

Last month, Mexican authorities reportedly located in the state of Veracruz about 600 migrants hiding in trucks making their way north of the country. Attempts to cross the border have intensified in the past year, and the U.S. Border Patrol has stopped an unprecedented number of immigrants at the border.