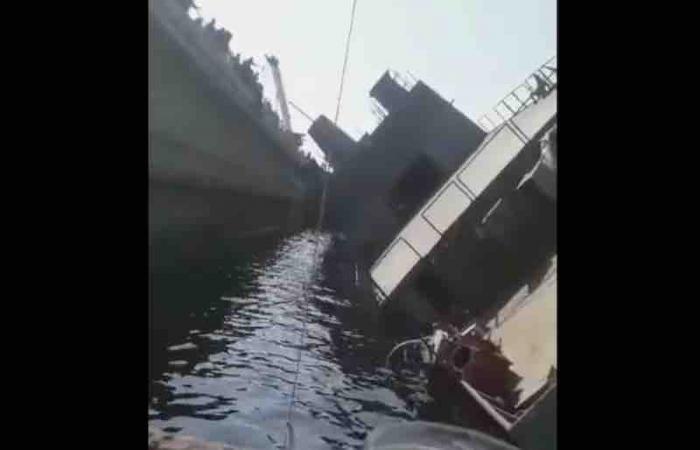 The Iranian navy seems to be wrapped up in misfortune when it comes to its warships. On December 5, a few days ago, the new naval ship, the Talayieh, capsized on its side at the Bander Abbas shipyard, the main base of the Iranian navy, before it was even handed over for operational service.

This is the fourth case in the last three years of ships that have sunk in Iranian ports. In January 2018 the frigate Damavand sank during a storm. The Damavand, which entered operational service shortly before its sinking, was one of the Navy’s major warships, the Moudge, ships designed and built in Iran.

In May 2020, the auxiliary ship Konarak was hit by a sea-to-sea missile accidentally fired on it as part of an exercise held by the Iranian navy in the Gulf of Oman. The missile was supposed to hit a naval target placed in the test area, but as a result of an operational malfunction, apparently, the missile was deflected from its target and sank the auxiliary ship.

In July 2020 during a Revolutionary Guards navy exercise, a vessel accidentally sunk in an American aircraft carrier configuration for training Iranian forces sank. The vessel almost blocked maritime traffic to the port of Bender Abes. And in June 2021, the Navy’s supply ship, the Kharg went up in flames and sank.

But at the same time, there is no doubt that the Iranian navy, which is trying to fight for power-building budgets, its dignity and roles in Iranian national security, and especially in the face of the centrality of the Revolutionary Guards navy, suffers severe blows from all these events.