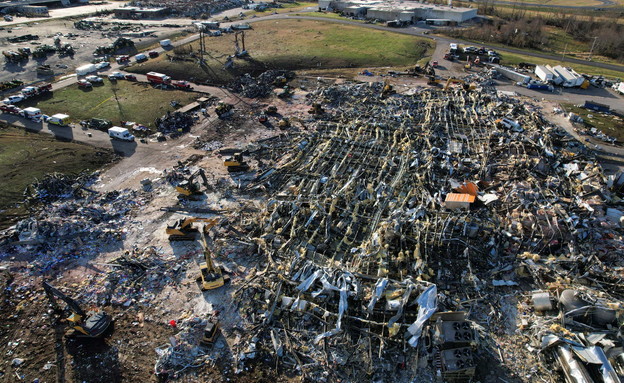 When the deadly tornado hit the state of Kentucky in the United States last Friday, workers at the candle factory in the town of Mayfield heard the warning sirens and intended to leave the building and take shelter. But then – something very unusual happened: at least five employees testified that their employers threatened to fire them if they did so, the American NBC network reported yesterday (Tuesday). Hours later the factory was hit by the tornado and collapsed on those present, 8 were killed.

Workers said that after the storm started, 15 of them asked the managers to allow them to go home to take shelter. Kayla Emery, a 21-year-old factory worker, was trapped under the rubble for about six hours, and was burned in the legs by the wax. She was interviewed by local media from her hospital bed and repeated: “People asked to leave shortly after the sirens went off outside the factory at about 5.30pm. I preferred to stay to get overtime.” The young factory worker said she heard with her own ears the managers threatening four of her co-workers: “If you leave – you will probably be fired.”

Elijah Johnson, another worker who worked at the back of the plant at the time of the storm, also recalled a conversation with executives: “I asked my boss – despite this crazy weather are you firing me? And he replied ‘yes’.”

“Management thought the danger was over”

“Those 15 workers asked to go home after the first alarm,” says Halle Conder, another 29-year-old factory worker. According to the testimonies, 2 warning alarms were activated in Mayfield, 3-4 hours apart. Another conder that the managers did not want to allow employees to leave the compound for safety reasons, and ordered them to concentrate on restrooms and corridors. After the first warning ended, the managers concluded that the immediate danger had passed – and returned to work. After a few hours another alert was triggered.

Factory spokesman Bob Ferguson responded to the storm, denying some workers’ claims: “This is completely untrue. We had a policy with the corona outbreak that any worker could leave whenever he wanted and return the next day.” He further denied the employees’ claims that the managers threatened that if they left the shift they would be fired.

At least eight people have died as a result of the collapse of a consumer goods plant in the town of Mayfield, Kentucky, which also made candles. The whole building collapsed in the storm, the pictures distributed from the arena indicate great destruction in the factory. The governor of the state of Kentucky, Andy Bashir, said last Monday that the death toll in the entire state of Kentucky as a result of the storm has risen to 74, but there are 109 people defined as missing – so the death toll is expected to increase.