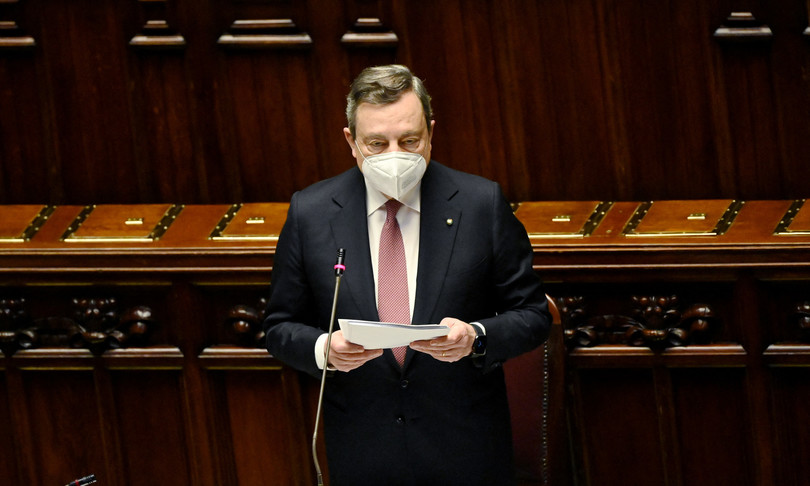 “We must be cautious, but we are approaching Christmas better prepared and safer”. Thus Prime Minister Mario Draghi, speaking in the Chamber on the eve of the EU Council.

“The arrival of winter and the spread of the Omicron variant – from the first investigations, much more contagious than those prevalent so far – require us to pay the utmost attention in managing the pandemic”, added Prime Minister Draghi.

“Infections are on the rise throughout Europe: in the last week, within the European Union, there were on average 57 cases per day for every 100,000 inhabitants. In Italy, the incidence is lower, almost half, but it is still growing “, said the prime minister.

“The government has decided to renew the state of emergency until March 31st to have all the tools necessary to face the situation – he continued -. I urge citizens to maintain maximum caution and to continue to respect the rules we have set for ourselves “.

The improvement in Covid data in Italy compared to last year “is mainly due to the vaccination campaign”.

“The European Commission expects Italy to grow by 6.2% this year, a rate higher than that of the European Union, equal to 5%. However, elements of uncertainty remain, such as the spread of the Omicron variant and inflationary pressures, also linked to the increase in energy prices. “Thus premier Mario Draghi, speaking in the Chamber on the eve of the European Council.

“In the face of these risks, it is right to confirm an expansionary budget policy for 2022, which consolidates the path of growth and points above all on investments”, said the premier.

“At the Euro Summit, we will also discuss the completion of the Banking Union, necessary to strengthen the financial stability of the monetary union. Italy – says the prime minister – is working to combine the two existing pillars – the Single Supervisory Mechanism and the Single Resolution Mechanism – with a European Deposit Insurance System. The president of the Eurogroup will provide details on the state of the negotiations underway, in which Italy is participating in a constructive spirit.
At the Euro Summit we will finally discuss the construction of the capital markets union, a project relaunched thanks to the new action plan of the European Commission, presented in September 2020 “, he added.

“The Commission’s action is taking shape through initiatives such as the revision of the Solvency II directive on the insurance sector and the regulation on long-term European investment funds.
The goal is to integrate national capital markets into a true single market, to increase investment opportunities for citizens and financing for businesses “, he concluded.

“Over the course of a year in Italy we have vaccinated nearly 46 million people with two doses – and over 300 million across the European Union. It is an impressive mobilization, for which I want to thank the National Health Service, the Structure of the Commissioner for the Covid-19 Emergency, the Civil Protection, all citizens. Today in Italy more than 85% of the population over 12 has received two doses, and about 20% have also done the third. I want to encourage once again those who have not been vaccinated to do so as soon as possible – and those who have taken the first two doses to do the third as soon as possible, “noted the prime minister.

“As a recent study by the Istituto Superiore di Sanità shows, the unvaccinated have an 11 times greater risk of dying than those who received the second dose, and nearly 17 times more than those who took the third dose.
Getting vaccinated is essential to protect ourselves, our loved ones, our community. And it is essential to continue to keep the economy, schools, places of sociality open, as we have been able to do up to now “, said the premier.

Speed ​​up deliveries of vaccines to poor countries

“The emergence of the Omicron variant demonstrates, once again, the importance of curbing contagion in the world to limit the risk of dangerous mutations. We will not be truly protected until the vaccines have reached everyone”, said Prime Minister Mario Draghi. .

“Governments of richer countries and pharmaceutical companies have made significant commitments for the distribution of free or low-cost vaccines to the poorest states. We must follow through on these promises with greater determination. The European Union has declared its intention to donate 357 million doses and has already delivered 134 million, mainly through the Covax mechanism. Italy has allocated 48 million 250 thousand doses and has already delivered 15 million through Covax “, explained Draghi.

“We need to speed up deliveries and we need to help Beneficiary countries to overcome logistical problems and improve delivery capacity, “he concluded.