The farewell visit between Mattarella and the Pope lasted 45 minutes 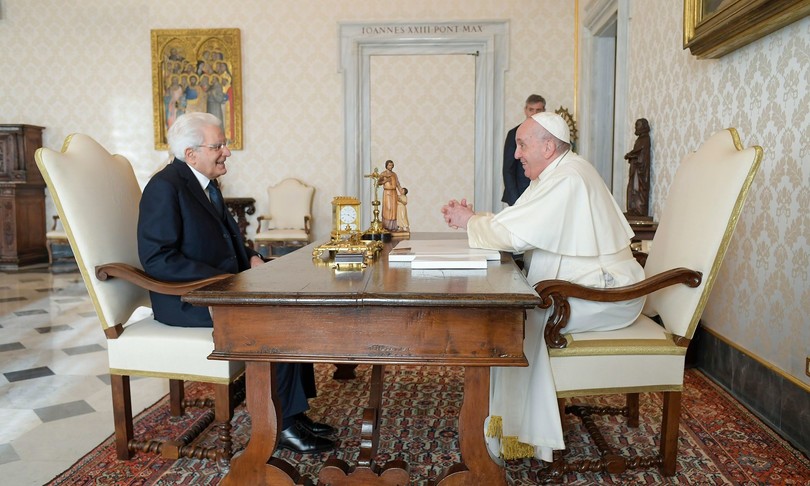 – Pope Francis’ conversation with President Mattarella lasted about forty-five minutes. Pontiff and Head of State engaged in an intense dialogue and after the exchange of gifts, the President then left the Pope’s private library and was received by the Secretary of State Pietro Parolin. During the visit he was accompanied by his daughter Laura.

The Pope and the Head of State have had various meetings in the seven years of presidential mandate, marked by a profound agreement on the themes of interreligious dialogue, peace facilitated by multilateralism, attention to the least and environmental protection.

The first meeting was Mattarella’s official visit to the Vatican, two months after the election on April 18, 2015, returned by the Holy Father with a visit to the Quirinale on June 10, 2017. In addition to the visits, Mattarella attended some celebrations held by the Pope, on the occasion of the opening of the Extraordinary Jubilee of Mercy and the canonization ceremony of Paul VI.

The head of state then spoke at the Eucharistic Celebration officiated by the Holy Father, on the occasion of the “Mediterranean, frontier of peace” meeting and both took part in the international meeting of prayer for peace among the great world religions entitled “Nobody is save alone – peace and fraternity “.

A ceramic painting depicting St. Peter’s Basilica seen from the Vatican Gardens, the volumes of papal documents, the Message for Peace for 2022, the Document on Human Brotherhood, the book on the Statio Orbis of 27 March 2020, by LEV were the gifts that Pope Francis gave to Mattarella.

The president, on the other hand, offered the Pontiff a print with a View of Rome from the Quirinal and a volume on the Madonna of sewing at the Quirinale, the fresco by Guido Reni which is located in the chapel of the Annunciation at the Quirinale.

Right in front of Our Lady of the needlework, the Pope and the President stopped briefly in prayer in June 2017 during the visit of the Pontiff. The painting is located in the chapel that belonged to the Popes and was commissioned by Paul V to Guido Reni at the beginning of the seventeenth century. A few years ago the restoration work. Pope Francis, on the other hand, also donated an unpublished to Mattarella: the Message for Peace for 2022 has not yet been published and therefore a first copy has been given to the President.