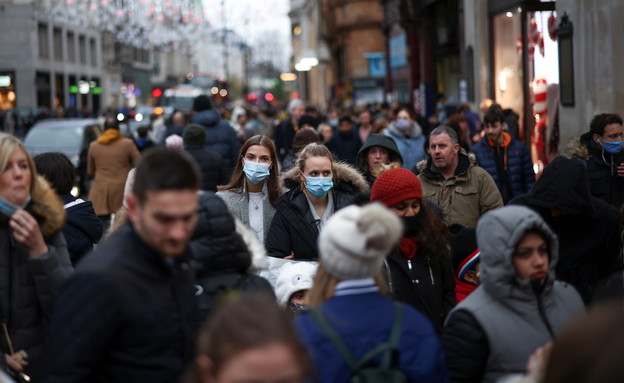 The Omicron hits Europe – and the continent closes: The UK Department of Health reported last night (Thursday) that in the last day 106,122 verified coronary heart disease has been diagnosed – the highest daily figure recorded in the country since the outbreak of the plague. According to the latest data, in the last 24 hours 140 patients died from corona. At the same time, a study by Imperial College found that the risk of hospitalization for patients in the Omaricon variant is about 40% lower than patients in the Delta variant.

The rapid spread of the omicron UK Led to an increase of 643,219 or 59% in the number of infected, according to government data. Many industries are facing a shortage of manpower due to the entry of workers into isolation and hospitals in the country have warned that the shortage could jeopardize the safety of the hospitalized. The British government announced last night that the length of the isolation period will be reduced from ten to seven days for infected people who perform two corona tests that turn out to be negative.

British Prime Minister Boris Johnson has ruled out imposing new restrictions before Christmas, saying there is uncertainty about the severity of the omicron and hospitalization rates. However, he did not rule out taking further steps after the holiday if the situation worsens.

At the same time, the authorities inBelgium Announced that from next Sunday the theaters, cinemas and concert halls will be closed. Sporting events will be held without an audience and the number of customers who will be allowed to enter the stores at the same time will be limited to only two. However, the Belgian government will not ban weddings and funerals, and will allow citizens to visit museums and paint physical activity even in enclosed spaces.

The spread of the new variant also affects what happens inChina, Where about 13 million residents of Xi’an city will enter the closure after 127 people were confirmed positive for the virus. Residents are prohibited from leaving their homes except for the purpose of purchasing essential groceries every two days or in emergencies. Travel to and from the city was prohibited except in exceptional circumstances requiring official approval, and all non-essential businesses were closed. The quick closure comes about a month before Beijing is due to host the Winter Olympics.

Prime Minister Spain Pedro Sanchez announced last night that following the spread of the Omicron Spain will oblige its citizens to wear masks outside as well. in parallel, north Ireland Ordered the closure of nightclubs starting next week after reporting 3,231 infections in Corona – the highest daily figure recorded in the country since the outbreak of the plague.

Another study conducted by the British Health Agency (UKHSA) and expected to be published soon confirms the early assumptions regarding the Omicron variant. In the study data, the results of which were submitted for a preliminary examination of the Politico website, the researchers note that although Omicron causes a “milder” disease – it is severe enough to need to be hospitalized.

According to the report, the study by the British Agency will claim that evidence has been found that among critically ill patients at Omicron there is a high chance of hospitalization and death. The study will further confirm the fact that the new variant is highly contagious, so that although the disease is apparently milder – too many infections can lead to a burden on hospitals.

The UKHSA is also expected to conclude that two doses of corona vaccine are not sufficient to offer strong protection against omicron and should be vaccinated with an impulse dose to significantly reduce the chance of developing a serious illness. A spokesman for the British Health Agency said in response to a publication in Politico that they did not intend to comment on unpublished data.