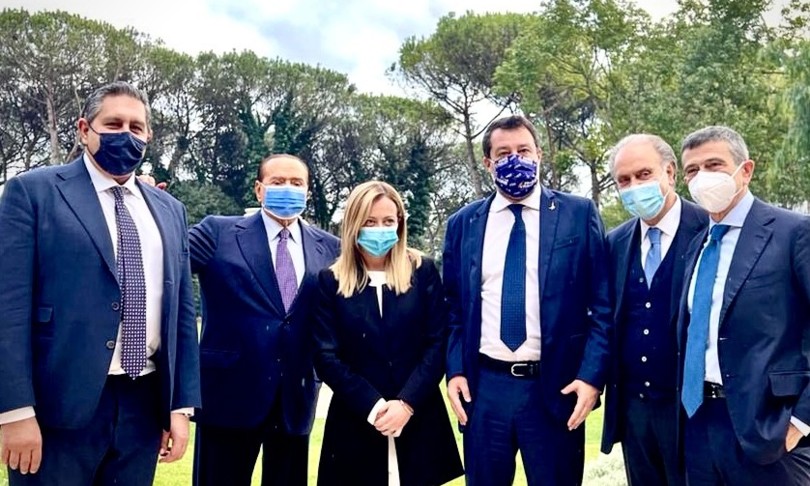 The center-right tries to proceed united and to appear compact in front to the crucial match of the next few weeks: the election of the President of the Republic.

In the aftermath of the year-end press conference in which Mario Draghi did not rule out ambitions in this regard, the coalition leaders tackle the issue at a summit for lunch, guests of Silvio Berlusconi at Villa Grande, the former home of Franco Zeffirelli on the ancient Appian Way.

Matteo Salvini, Giorgia Meloni, accompanied by Ignazio La Russa, Giovanni Toti for Cambiamo, Maurizio Lupi for Noi with Italy and Lorenzo Cesa for the UDC sit at the Cavaliere’s table.

When I finish, Il Cavaliere offers himself to the journalists to say that his candidacy was mentioned during the summit but it was decided to talk about it again in January: “The center-right will be united. We have postponed all decisions to the beginning of the year, after Christmas”, he assures.

And to those who ask him about Draghi’s ambitions, the Forza Italia leader replies: “I cannot give answers on the intentions of others”.

During lunch, between courses – ravioli with butter and sage with fresh tomatoes, sliced ​​beef tenderloin, cauliflower flan and artichokes – the guests ask the host about his real intentions on the Hill.

Berlusconi takes his time, replies – always to what is learned – that he has no intention of formalizing his candidacy yet, but to the diners he still appears very determined to put his name on the table.

The ‘partners’ of the center-right reaffirm their support in the event that he decides to formalize the race, then the formations that support the Draghi government again ask that the former Governor of the ECB remain at Palazzo Chigi to “give continuity to the executive action “, also given the situation of increased infections.

An elegant way to reiterate their no to a possible ‘move’ of the premier to the Colle. Event that Meloni, the only opposition, has made it clear in the past to favor but only in the case of consequent early elections.

The president of the Brothers of Italy intervenes at this point to reiterate to the allies that Draghi’s press conference was very clear to her: the premier wants to go to Colle.

“What do you plan to do in case he gets elected? Do you think you can support another government or ask for elections? ”, Meloni asks without receiving – a participant in the debate reports – an answer.

The impression of a Draghi determined to go to the Hill is not shared by the whole center-right. In some, the day after the press conference, a feeling of ‘braking’ prevails on the part of the premier. Salvini takes the floor at lunch. “I am ready – he offers – to commit myself so that an election of the President of the Republic can be reached quickly and as much as possible shared, it being understood that we will have to deal with a proposal for a center-right that is the majority in the country and in Parliament”.

The Northern League secretary has just returned from a half-hour face-to-face with Draghi, who had called him in the morning for a meeting requested by Salvini himself the day before on the subject of expensive bills. In recent days, the head of via Bellerio had proposed a table open to all party secretaries to ‘mine’ the path towards the election of the next President of the Republic, scheduled for February 3, the expiry date of Sergio Mattarella’s mandate .

Out of the spotlight, it is reported, Salvini is already cultivating 360-degree relations, while the summit of the center-right leaders is updated on January 14th, the day after the meeting of the Democratic Party called by Enrico Letta.

In the meantime, on December 27 Salvini will be in Torbole Casaglia (Brescia) for an initiative of entrepreneurs on expensive bills supported by the Lombard regional councilor Guido Guidesi. Salvini was satisfied with the meeting at Palazzo Chigi because he is sure that the government will not be insensitive and will field other funds to cut costs, it is reported. In half an hour of conversation with the premier, he insisted on the urgency of the new generation of nuclear power “to help Italy in the medium term, but immediate action on bills is needed”.