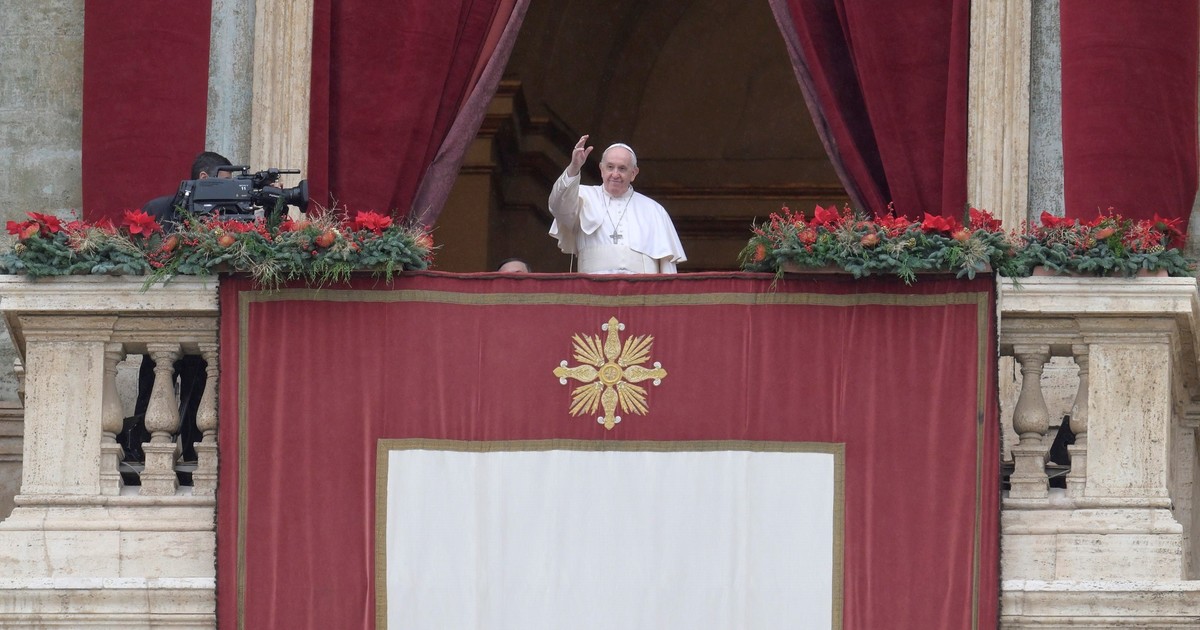 Pope Francis wished this Saturday “peace and harmony” for the world and demanded that there be “dialogue” to resolve the “many conflicts, crises and contradictions” open at the global level. It was in a Christmas message in which he also asked for “solidarity, reconciliation and peaceful coexistence” throughout America.

From St. Peter’s Basilica, the Pontiff gave the blessing City and World (To Rome and the world), traditional Christmas, in the rain and in front of a reduced capacity due to the situation that the world is experiencing due to the pandemic.

In a message in which he asked for several open conflicts in the world, Francisco regretted that in the international arena there is a risk of not wanting to dialogue, the risk that the complexity of the crisis induces to choose shortcuts instead of the slower paths of dialogue. They are those of dialogue – added the Pontiff -, in reality, “the only ones that lead to the solution of conflicts and shared and lasting benefits.”

Thus, Jorge Bergoglio lamented the existence of “many conflicts, crises and contradictions” that “seem to never end and almost go unnoticed.”

“We have become so accustomed that immense tragedies are already overlooked; We run the risk of not hearing the cries of pain and despair of many of our brothers and sisters, “the Pope lamented.

In its 9th Christmas as Pope, Francisco wished “that in the hearts of the peoples of the American continent the values ​​of solidarity, reconciliation and peaceful coexistence prevail, through dialogue, reciprocal respect and recognition of the rights and cultural values ​​of all beings humans”.

In an explicit reference to the global situation due to the spread of the coronavirus, the Pope took advantage of the message to ask for “the victims of violence against women that is spread in eThis time of pandemic “, as well as also dedicated a message” to children and adolescents victims of intimidation and abuse“.

After reiterating his requests that “the most appropriate solutions be found to help overcome the health crisis and its consequences,” the Pontiff The Argentinean insisted once again with the claim to “send the necessary assistance, especially the vaccines, to the poorest populations“.

In this context, Francisco did not forget to remember “the drama of the emigrants, the displaced and the refugees.”

Beyond the conflicts, the Pope renewed his environmental commitment and asked that “the political authorities” can “reach effective agreements so that the next generations can live in an environment that respects life.”

Peace in the world

“Child Jesus, grant peace and harmony to the Middle East and the whole world”, asked the Pontiff, when visiting several of the open conflicts in the world for which the Holy See remains concerned.

Francis lamented the situation of the “Syrian people, who for more than a decade have been experiencing a war that has caused many victims and a untold number of refugees“.

“Let’s look at Iraq, which after a long conflict still has difficulty getting up“, the Pope recalled about the country he visited in March this year.

After complaining about the “enormous tragedy forgotten by all” in Yemen, the Pope asked to remember “the continuous tensions between Israelis and Palestinians that drag on without a solution, with increasing social and political consequences. ”

Among the problems in the Middle East, he also included Lebanon, a place he aspires to visit in 2022. Francis regretted that the so-called “Country of Cedars” suffered “an unprecedented crisis with very worrying economic and social conditions” –

Bergoglio also indicated his request for support “to all those who are committed to the humanitarian assistance to the populations that are forced to flee their homeland “, in particular the” Afghan people, who for more than forty years have been severely tested by conflicts that have forced many to leave the country. ”

In addition, the Pope made a request so that “the political authorities” of the world can “pacify devastated societies due to tensions and conflicts “.

Along these lines, he called for dialogue in Myanmar and demanded that “the metastasis from a gangrenous conflict“That shakes the European country.

The Pope’s requests also ran through various conflicts in Africa, including Ethiopia, and a general wish for “the Sahel region, which suffers from the violence of the international terrorism“.

Francis also raised his thoughts for “the peoples of the North African countries who suffer because of the divisions, unemployment and economic inequality“and wished an end to” the internal conflicts in Sudan and South Sudan “, where he wants to travel next year.