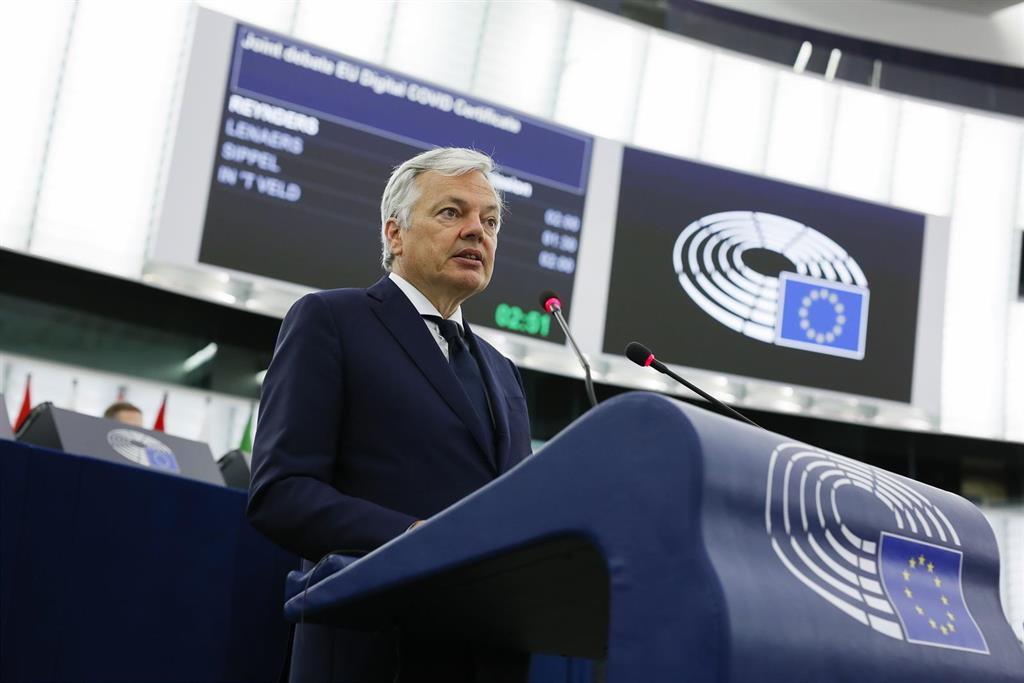 The plenary session of the European Parliament has shown this Tuesday its majority support for the approval of the EU Covid Certificate because it will facilitate the travel of European tourists vaccinated, with antibodies or with a recent negative test; Although many MEPs regret the lack of clarity on the part of national governments regarding the use that will be given to it and criticize that PCRs are not free because they believe that it discriminates against those who are not vaccinated.

The plenary session will vote late on Tuesday on the approval necessary for the certificate to be fully effective on July 1, although the result will not be announced until early Wednesday, when it is assumed that majority support will be confirmed. to the initiative.

The European Commission, through the mouth of its Justice Commissioner, Didier Reynders, has urged the national authorities to start “now” the issuance of certificates in countries already prepared at a technical level, to avoid risks of collapse when it formally starts in July .

The new document, in digital or physical format, free and multilingual, is called to reactivate tourism within the EU because the Twenty-seven are committed to not impose additional quarantines or tests at destination to the holders of this title, which will prove that have been vaccinated, have antibodies or a negative test.

“It will establish legal security, non-discrimination and the protection of fundamental rights”, celebrated the chief negotiator of the European Parliament for this regulation and Socialist MEP, Juan Fernando López Aguilar.

The MEP, also president of the Commission for Civil Liberties, Justice and Home Affairs in the European Parliament, stressed that the new rule allows “to limit in European law the competence claimed” by the Member States to impose restrictions on free movement.

In this way, he added, citizens will be able to “invoke before the courts” their rights to vindicate the principles of proportionality and necessity if any EU country decides to impose additional measures, something foreseen only in emergency cases “for the sake of preservation of the public health “and with the condition of notifying it before to the European Commission and to the rest of partners in the block, as well as to inform properly to the travelers.

In the debate held during the first plenary session held in Strasbourg (France) since the pandemic was declared in the EU more than a year ago, MEPs welcomed the creation of the certificate because they believe it will help restore the right fundamental to the free movement that Schengen ensures, but that most EU countries have suspended during the coronavirus crisis in an uncoordinated manner.

“Europeans have to know exactly what to expect at each border, Member States must specify their measures,” said the spokesman for the group of the European People’s Party (EPP) in the debate, the Dutch Jeroen Lenaers.

Along the same lines, the also ‘popular’ Dolors Montserrat has pointed out the lack of harmonization and information on the part of the countries as an “obstacle”, while claiming that the diagnostic tests necessary to obtain the certificate are free “for that inequality between Europeans is not generated “.

The Socialists and Democrats (S&D) have also expressed their support for the Certificate but have pointed to the capitals from which they have demanded “clarification” on the practical application of the system, in the words of the representative of the group in the debate, Birgit Sippel.

As for the group of liberals, Renew Europe, the MEP Sophie in’T Veld has defended that “it is not the virus that has taken away free movement but the divergent legislation” of the Twenty-seven, for which she has also stressed that the Reopening of borders still depends on what countries decide.

The Citizens MEP José Ramón Bauzá, for his part, stressed that the certificate has been defined based “on health and non-political criteria”, but has called on the Commission and the Council to go hand in hand to pressure the United Kingdom to follow the same strategy and allow its nationals to travel to the European Union. Thus he has pointed out that the United Kingdom is “the main source of tourists” to the EU, so that the “continuous blockade” of the British Government on foreign travel is a “huge problem” for the sector in Europe.

DISCRIMINATION FOR NOT FREE OF THE TEST

“Freedom of movement will depend on the economic situation of the people and that is discriminatory”, the Finnish MEP of the Left Silvia Modig criticized during the debate, in a message of unease shared by the majority of the European Parliament.

Vox MEP Jorge Buxadé has also complained about the discrimination that in his opinion the conditions of the certificate pose, who considers that the European document “clearly favors the vaccinated” over those who have antibodies or those who present a negative test.

“Why are PCR tests obligatory if they are not free? Hadn’t we agreed that free movement and the right to be vaccinated were guaranteed or not,” Buxadé criticized, after recalling that the certificate for those who have overcome the disease it will expire after 180 days.

The European Parliament had in its mandate to negotiate the Covid Certificate with the Twenty-seven to demand the free PCR or antigen tests that were linked to the issuance of the document, since they consider that otherwise there would be differences between those who are vaccinated for free and who have to pay for a test in order to travel.

In the end it did not meet this requirement, but there was a commitment to allocate more funds to the purchase of diagnostic tests to reduce their price and ensure that they were “affordable” in all EU countries.