Fear: Iran will soon deploy and attack with UAVs throughout the region 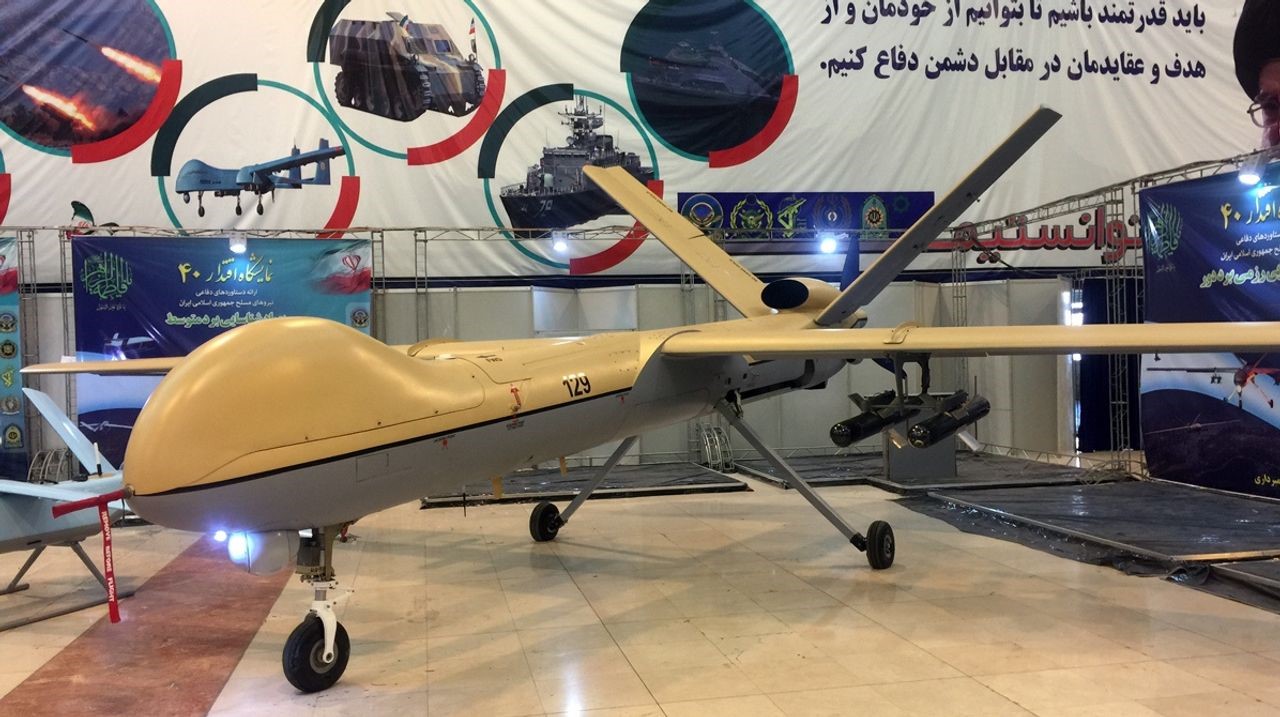 An Israeli source told the Iranian opposition website “Iran International” that Iran plans to make UAV attacks the focus of its offensive activity throughout the region in the near future. The source, who wished to remain anonymous, said in an exclusive interview that in recent months the Iran Revolutionary Guards (IRGC) have been increasing the supply of UAVs to proxy organizations in the region and beyond. He noted that they now had forces backed by the fear: Iran would deploy and soon attack with UAVs.

An Israeli source told the Iranian opposition website “Iran International” that Iran plans to make UAV attacks the focus of its offensive activity throughout the region in the near future.

The source, who wished to remain anonymous, said in an exclusive interview that in recent months the Iran Revolutionary Guards (IRGC) have been increasing the supply of UAVs to proxy organizations in the region and beyond.
He noted that Iran-backed forces in Iraq, Syria, Yemen, as well as Hezbollah in Lebanon had now received these drones, adding that they had also been sold to Venezuela.

The unmanned vehicles have begun carrying out attacks across Iraq and Syria in recent months. In early November, the Iraqi prime minister’s home was the target of a drone strike, according to estimates launched by pro-Iranian militias upset by the loss in Iraqi parliamentary elections.

The Iran-backed Houthi movement in Yemen sent 14 UAVs to a number of Saudi cities in November, including Saudi Aramco facilities in Jeddah.

General Kenneth McKenzie, commander of the US CENTCOM, expressed concern in an interview with the Associated Press published two weeks ago about the growing capabilities of Iran’s missiles and drones.
He said Iran had begun mass production and supply of skimmers following failures and frustration in smuggling missiles and heavy weapons to its supporters in the Middle East.

Among the other reasons for this strategy change are the lower cost and the higher intensity of destruction of UAVs, he stressed, adding that since UAVs can hit their target after many detours, it is difficult to identify where they are going so the Islamic Republic can simply deny its role in the attacks.

He added that almost all types of Revolutionary Guards drones have been assigned and assembled from U.S.-made drones in Afghanistan, Iran, Iraq and elsewhere, as well as Israeli-made models. For example, Iran’s Shahed 129 drone is modeled after an Israeli Hermes drone that Iran shot down near the Natanz nuclear enrichment facility.

According to the source, the drones are under the direct command of Unit 190 of the Quds Force of the Revolutionary Guards under the direct supervision of Amirali Hajizda, commander of the Aviation and Space Force.

Bills were introduced in the US Congress this month to ban aid to Iran’s military drones. The bill seeks to amend the Countering America’s Adversaries Through Sanctions Act (CAATSA) to include any action that seeks to advance the program as committing to sanction under U.S. law.

On November 20 this year, Center researcher Yoni Ben Menachem announced that US President Joe Biden had addressed the Iranian drone threat on October 31. In a speech at the G20 summit, he announced that the United States would respond to Iranian actions contrary to the interests of Washington, including UAV attacks.

President Biden addressed the surprise Iranian attack on October 20 on the basis of a UAV-based drone strike.

The Tanaf base has about 400 American soldiers and civilians, and is located in Syrian territory in the border triangle with Jordan and Iraq.

This is the first time that this base, set up for the purpose of the war against ISIS, has been attacked by Iran, according to Syrian sources. From Iraq, which indicates the high coordination and accuracy of the pro-Iranian militias in the use of this new assault weapon. There were no casualties in the attack but damage was done to the base.

On October 31, the Persian news agency Tasnim reported another rocket attack on an American base in Syria.
The Iranian UAV weapon, or UAV as it is called in the IDF (unmanned aerial vehicle), has become a very dangerous weapon in the Middle East, the Iranians have developed it and it is performing impressively in the war of the Houthi rebels from Yemen loyal to Iran against Saudi Arabia, like The Iranians also provided it to their loyalist militias in Iraq and Syria, as well as to Hezbollah in Lebanon and to Hamas and Islamic Jihad in the Gaza Strip.

In recent months, Iranian drones have attacked targets in Jordan after being launched by pro-Iranian militias in southern Syria and there have also been attempts by these drones to infiltrate Israeli airspace but they have been intercepted by the Israeli Air Force.
General Hussein Salami, commander of Iran’s Revolutionary Guards, claimed last June that his country had developed UAVs that could fly 7,000 kilometers and land anywhere.

Imposition of sanctions on the heads of the UAV system
Iranian drones have become a source of constant concern for the United States and Israel. The token fell to the Americans during President Trump’s administration following the Iranian attack on Aramco’s oil facilities in al-Buqake in Saudi Arabia on September 14, 2019.

Officially, the Houthi rebels in Yemen have claimed responsibility for the attack, but Israeli intelligence sources estimate that Iran was the one to launch the ballistic missiles and trapped drones used in the attack, the hits were very precise and caused extensive damage.

The Iranians are also using the Houthi rebels in Yemen to launch suicide bombers at Western ships on international shipping routes in the Gulf of Oman and the Red Sea.

The ship “Mercer Street” was also attacked on July 29 in the Gulf of Oman by Iranian UAVs that apparently took off from Yemen, where Iran has set up a large base of suicide UAVs.
In an attack that took place, as part of the naval battle between Israel and Iran, a Romanian captain and a British security guard were killed.

On September 12, Defense Minister Bnei Gantz revealed at a conference of the Institute for Counter-Terrorism Policy at Reichman University that Iran was training terrorist operatives to fly drones at the “Kashan” base north of the Iranian city of Isfahan.

The base is the cornerstone of the Iranian air terror export system in the region, an array of precision lethal weapons, which like a ballistic missile or airplane capable of crossing thousands of kilometers, the Iranians manufacture and export aircraft to envoys and these coordinate with the Revolutionary Guards and the Air Force. “Quds force,” Ganz said.

According to senior security sources, Israel has encouraged the Biden government to take action against the heads of the Iranian UAVs following the attack on the Mercer Street ship.
The United States announced on October 29 that it was imposing sanctions on two Iranian companies and four Iranian citizens involved in the drone operation, among the names on which the sanctions were imposed was the name of Said Arjani, head of the UAV Air Force’s UAVs.

Defense Minister Bnei Gantz revealed the name of Said Arjani as the chief operator of the Iranian UAV system as early as August, in a meeting with foreign ambassadors, after the attack on the ship “Mercer Street”.
According to Defense Minister Said Arjani, he provides the equipment, training, programs and is responsible for many terrorist acts in the area.

However, the United States has so far refrained from dealing with the “snake’s head” of launching the UAV attacks, which is General Amir Hajizda, commander of the Revolutionary Guards’ Air Force.

Amir Haji Zada ​​has become the main figure operating the Iranian drones against American, Israeli, Saudi and Jordanian targets in the Middle East, his status being greatly strengthened after the assassination of Qassem Suleimani.

It is possible that the Biden administration does not want to further escalate relations with Iran in order to leave a chance for it to return to the nuclear talks in Vienna anyway and therefore does not impose sanctions on Amir Haji Zada.
However, for Israel, Amir Hajizadeh is “on target” and is a legitimate target for harming the right timing.
Where are things going?
Iranian drones will occupy the Middle East, Israel and the United States for a long time to come.

They have become a dangerous and effective Iranian-Shiite weapon that threatens all Sunni countries in the Middle East.

The United States has already pledged to King Abdullah of Jordan to provide him with warning and protection devices made in Iran, some of the military equipment that was evacuated due to the American withdrawal from Afghanistan will be transferred to Jordan for this purpose.

As part of the strategic relations between Israel and the United States, the danger of the Iranian drones has been discussed several times, the issue also came up in Prime Minister Bennett’s meeting with President Biden in the White House. Of Iran and its affiliates against Israel.

Even during the time of President Trump, a joint Israeli-American working group was established to examine ways to deal with the danger of the Iranian drones, and this group continues to operate during the Biden administration.
Israel proposes to include in cooperation with the United States and Israel on this issue also Arab countries threatened by Iranian drones such as Saudi Arabia and Jordan.