13 million Chinese have been stuck at home for a week: a glimpse of the strict lockdown 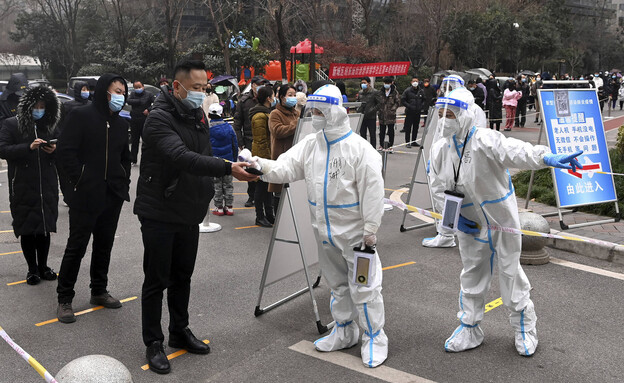 151 new infections in Corona – This is the figure reported in the Chinese city of Xi’an, which is almost all 152 infections in the entire republic in the last day. From the beginning of the month until now, the city has registered “only” a thousand infected, and this is remembered in parallel with the widespread spread of the omicron around the world – a variant that has not yet been discovered in the city as of this writing.

The eruption at its peak is minimal compared to eruptions in many other places around the world, and the reason for this is the same policy that other countries like New Zealand have tried in the past – “zero corona”. The streets are empty, 13 million residents are locked in their homes, and as of last week it was also forbidden to drive in or out of the city. Beijing is determined to defeat the small eruption at its peak or any other eruption in a tough, immediate and sharp manner. How tough? Xi’an residents cannot leave the city without permission from the employer or community leaders.

The Reuters news agency spoke with a 32-year-old mechanic who traveled to Peak for a business trip. He planned to return home last week, but plans went awry and he got stuck in the city because local community leaders refused to give him permission to return home. He said he missed his wife’s birthday, and will probably be forced to spend the New Year at his peak.

This week the local government at its peak halted the issuance of approval even to people who want to leave their homes just to buy essential products. The British Guardian quoted a Xi’an resident as shouting, “I’m going to be starving to death.” The same resident called for help on Chinese Twitter and Vivo: “No food, the manager of my housing complex is not letting me out, and my noodles are about to run out. Please help!” Indeed, according to the Guardian many Xi’an residents have raised similar complaints online. The restrictions are so severe that it is forbidden to drive and there is an exit permit for one of the occupants of the house to purchase groceries every three days only. This is the most sweeping general closure in China since Xuan, the city where the corona first broke out, was cut off from the world in the early days of the plague.

Xi’an municipality said it would be possible to resume shopping for people in less dangerous areas once the mass tests provide negative results. This is without specifying when the residence restrictions will be lifted. But as the Chinese days go by the peak are complained on social media about not fresh produce of food. Meanwhile, several district committees in the city of Xi’an began arranging aid shipments to residents’ homes, and temporary booths were set up in large residential complexes in the area. The local government, for its part, denies the complaints and has ruled that the food sold is fresh.

Authorities began a new round of corona tests across the city this morning (Wednesday). Residents hope the current round will change the bleak picture. Of course, this also has significant effects on the economic aspect, and the moves concern the industry that operates in the city. Technology giant Samsung, which owns a factory in Xi’an, said it had decided to “temporarily adjust operations” at its production facilities in the city. Chinese electric vehicle company BYD reported that vehicle production was affected by the outbreak of the plague to some extent, so its people are making adjustments.

According to reports on social media, the Chinese police are even carrying out unusual punitive measures. Pictures shown as documentation from southern China show a strange march in the streets with four people allegedly violating corona laws, the four reportedly – covered and in white suits – carrying signs showing their pictures and names, they were reportedly shown last night in front of a large crowd in Jingxi city.

In photos of the incident whose credibility is in doubt, any suspect in violating the rules is held and surrounded by a circle of police officers. According to the public shaming report was part of disciplinary measures announced by the local government in August to punish those who violate health rules. China banned such a public indictment back in 2010 after decades of human rights organization campaigns, but according to the photos, the practice has resumed when China enforces the “zero corona” policy.

In the midst of all the chaos recorded at its peak it is important to emphasize: in all of China no new deaths have been recorded from Corona. According to the Reuters news agency, the death toll from the outbreak is 4,636. The World Health Organization continues to warn that the Omicron variant may lead to health system insufficiency, although early studies suggest that the strain causes milder disease. Moreover, the number of daily verified has dropped in recent days across Europe and also in the US. At the same time, China is not the only one tightening restrictions – South Africa and Germany have also imposed extreme restrictions, a list that may lengthen with more countries considering restrictions for the new year.