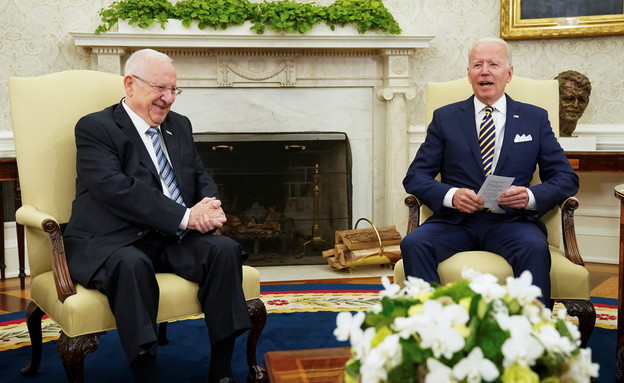 Iran, Gaza and Farewell in the Oval Office: Outgoing President Reuven (Ruby) Rivlin met last night (Monday) with US President Joe Biden at the White House – as part of his farewell visit, towards the end of his term. The two discussed the political issues at stake, most notably the Iranian nuclear issue. Biden told Rivlin that “I will not allow Iran to acquire nuclear weapons, our commitment to Israel is strong.” President Rivlin replied: “Israel has no friend and closer ally. We can agree to disagree but we trust you.”

In addition to the two presidents, the meeting was attended by US Deputy Secretary of State Wendy Sherman, National Security Adviser Jake Sullivan, Middle East and North American Coordinator Bart McGregor, Senior Adviser to the Middle East and North Africa and Adviser in charge of Israel and the Palestinians, G. “I have been told by the President that the presidents have discussed” the United States’ commitment to Israel’s security and the protective envelope in which the United States is assisting Israel, with an emphasis on the days following Operation Wall Guard in Gaza. “

Biden: “My commitment to Israel is solid as iron, expecting to host Bennett soon”

“I am very happy to host President Rivlin here, I am glad that the president’s daughter is also here, I met her and we talked about the family and the grandchildren. Thank you for your dedication to relations between Israel and the United States. “My commitment to Israel is solid as iron, it includes a commitment to uncompromising support for Israel’s right to self – defense,” the US president said.

“Iran will not have nuclear weapons in my shift,” Biden stressed at the meeting between the two. He referred to the US-led militia attack a day earlier on the Syrian-Iraqi border and Bennett’s expected visit to the White House: “I ordered the airstrikes yesterday. My team is working closely with the new government in Israel, I expect to host Prime Minister Bennett in the White House soon. “

Biden: “My only regret is that you’re leaving,” Rivlin: “That’s been long enough.”

The US president added during the farewell that “the US fully supports normalization with the Gulf states and Africa as well. Israel and the US will continue to work together to promote peace and stability in the region. My only regret is that you are leaving as president. “Rivlin grinned and replied:” Israelis had enough time. “Eight years is too much, I did my best.”

“I am excited and excited to be here again at the White House, Israel has no friend and closer ally,” said outgoing President Rivlin. “You are our best friends and the ties between the peoples are based on the partnership in the values ​​of democracy and liberalism. Therefore, from time to time we can also discuss issues and agree to disagree, but we trust you. Your statement now makes it clear that we have a great friend in the White House,” he added.

Rivlin: “We found a true friend of the State of Israel in the White House”

At the end of the White House meeting, President Rivlin issued a statement to the media in which he described the meeting as “very in-depth and very detailed on issues that concern the entire Middle East and of course the United States and the problems Israel is facing.” Rivlin added compliments to Biden: Of the State of Israel, which in all its years without a political connection always said, even in the days when I met him in 1971 in Jerusalem with Tali Kollek, “You do not have to be a Jew to be a Zionist.”

Rivlin reiterated the issue of the Iranian nuclear issue to Biden but shared that there is time until a decision is reached on this issue. “We have found a friend as well as a response to our requests and demands to keep an eye on everything related to the agreement being reached with Iran. Things are still far from decided. The president has clarified his positions and heard our positions,” Rivlin said, reiterating Biden’s promise to invite Prime Minister Bennett to a White House meeting soon.

“The President (Biden) thinks it is necessary to invite the Prime Minister as soon as possible to coordinate matters regarding the way forward we are facing all the problems the world faces and in particular the Middle East. We have found true leadership and friendship for the State of Israel and the need to maintain and maintain its security,” he said. .

Join me live at the U.S. Capitol with His Excellency Reuven Rivlin, President of the State of Israel, ahead of a bipartisan leadership meeting. https://t.co/nEPF511fQC

After the meeting with Biden, Rivlin proceeded to a farewell meeting from the U.S. Congress, led by House Speaker Nancy Pelosi who told him: “It is an official pleasure to have you in the Capitol, it is a personal pleasure for me as someone who has admired your leadership for a long time. We last met before the Corona at events marking the 75th anniversary of the liberation of Auschwitz. It was a historic event. “

“When we came back we passed legislation to transfer resources to study the Holocaust in the United States,” Pelosi continued. “All along we had a wonderful friendship. Support for Israel in Congress has always been bipartisan and will continue to be so because of our common values ​​and our common security concerns. Thank you for your friendship and visit. “

President Rivlin replied: “Israel has no better society than the United States. The unique ties between peoples have always been based on common values, democracy and liberalism. We are partners, friends, our peoples are bound together. Friends have disagreements from time to time and it will never endanger our friendships. “

Rivlin clarified that the close connection between the United States and Israel has no dependence on governments and will always be maintained. “Our common mission crosses party boundaries. Even as leadership changes our commitment only grows stronger. I know that the security and well-being of the public in Israel and of American Jews is very close to your heart, “he clarified. “Thank you for welcoming me to the Capitol. The Capitol is the temple of democracy for the whole free world.”

This afternoon, I’ll be meeting with Israeli President Reuven Rivlin at the White House. I’m looking forward to highlighting the strength of the bilateral relationship between our two nations and working together to achieve security and stability in the region.

“I look forward to emphasizing the strength of relations between our two countries and working together to achieve security and stability in the region,” Biden tweeted before the meeting. Israeli Ambassador to the United States and the United Nations Gilad Ardan – In response to a tweet from the President of the United States, he wrote in response: “Thank you for your commitment to Israel’s security and for strengthening the important alliance between our countries.”

Last night, White House spokeswoman Jen Saki gave a media briefing, in which she said that “a meeting with Prime Minister Bennett is expected, a date has not yet been set.” She further referred to US attacks the night before on the sites of pro-Iranian Iraqi militias on the Syrian-Iraqi border, noting that they were “intended to reduce the chance of escalation” and did not relate to the president’s visit.

In the first, Rivlin met with representatives of the Jewish community in New York, where he addressed the disaster in Miami and concern for the lives of hundreds of missing people in the collapse of the apartment tower in the city. “My brothers and sisters, I would like to send prayers, our deepest prayers, to the Jewish community in Florida and to all the families who lost loved ones in the terrible tragedy that occurred a few days ago. We pray today for the full recovery of all those injured in this terrible disaster,” he said.

I met last night with representatives of the Jewish community in New York. Together we offered a prayer for the locating of survivors of the terrible disaster that occurred in Miami, and for the full recovery of all the wounded.
Our hearts ache along with the families who have lost loved ones and with the Jewish community throughout Florida.

In the shadow of the growing anti-Semitism since Operation Wall Guard, the outgoing president stressed that “we must fight all forms of anti-Semitism while using all the tools at our disposal. I know President Biden and the current administration are committed to an uncompromising war on rising hatred. In the United States and around the world.