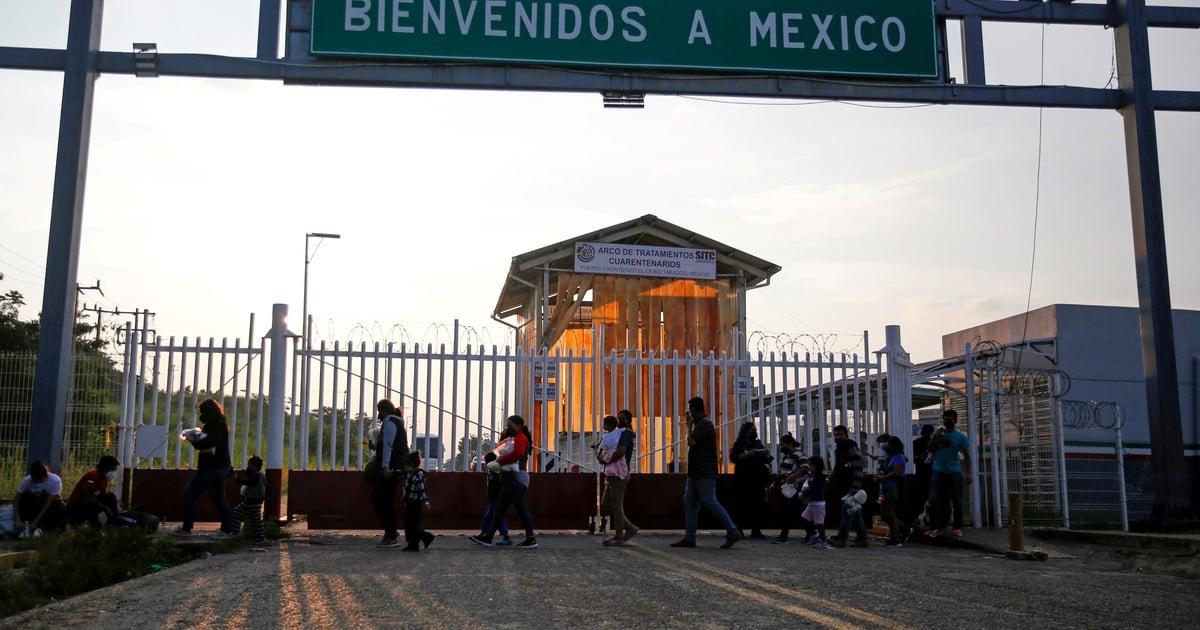 “Safe houses” or “warehouses”: this is the name of the places where “coyotes” hide undocumented migrants, for days or months.

Many are from Central America, Africa, Cuba, Venezuela, Peru or Bolivia, and their stay is extended in these houses when relatives who live in the United States do not send the money quickly, or it simply never arrives.

Then their dream of reaching the north disappears and the danger that they may experience in these places is unimaginable.

RFI traveled to one of these houses that is located near the border between Mexico and Guatemala. There we met a human trafficker, commonly called “coyote” and who also guards this house.

“What I do here is receive migrants and transfer them to the United States. Prices vary depending on the type of trip they want. If they want to go by bus or private car, sometimes we call them the VIP trip, it is much more expensive, between 9,000 and 11,500 dollars, to Houston, “he explains under anonymity, for security reasons.

“Now, if they want Mexican papers, permanent residence or a humanitarian visa, they can also be obtained, but for prices that are somewhat high … between 2,000 and 3,000 dollars,” he adds.

The coyote comments that inside this house they try to provide everything to the migrants, once they have already paid. They can cook, they have water, electricity and beds.

Hunger and fear of deportation

Migrants do not leave because the risk of being deported exists all the time and those who provide what they need are the coyotes.

Most of these houses do not give any of these conditions to migrants. Many died from lack of food or water and the situation becomes inhumane and very dangerous, as this coyote explains.

The different altercations encouraged the existence of rules and limits within this space. For the past few years they have had to hide children and women, who seek to reach the United States.

“Since the children are here, no alcohol, you cannot alter the coexistence with the children, have loud music and for hygiene reasons, it is respected because I demand it here,” says the coyote.

And he concludes: “No one can leave this house without my authorization, and with children, what I demand the most here is cleanliness. The bathroom, for children’s health reasons. This is the second time, the first time there was only one child, now this second time it is harder because there are four children: one eight years old, six, five, another one year and two months old ”.

Lucile is 28 years old, she is the mother of the three children. She left Honduras on March 28 of this year, her father is in the north and he was the one who sent her money the first time so that she could embark on her journey with her children, but she was unlucky enough to be scammed twice. by alleged coyotes.

He had to get a third guide and more money to make it to this new safe house.

“The most difficult thing has been to adapt the children to this environment, to be locked up and not having any possibility even financially. The treatment of the people in the house was all good, thank God they treated us well, but it was difficult, sometimes more people came and we squeezed each other. The important thing is that I walk with my children and we are fine, “he says.

The little ones tell how they played in Honduras before traveling and how everything changed when they started their trip with their mother: “There I had a bike and I learned by falling, as the fourth time it worked for me from there I was already playing with the bike,” he says the oldest, who has the most vivid memories.

He tells how they lived in one of the previous safe houses: “There were wild dogs and when we ran they chased us. One time it almost bit me, ”he says. And he adds that in this new house he feels good.

Migrants from Central America cross the bridge that connects Tecum Uman, in Guatemala, with Ciudad Hidalgo, in Mexico, in January 2020. Photo: AFP

“On the trip we have had to sleep on the ground, go tight, it is very difficult, but it is a purpose that we have to fulfill. It is impossible to return to Honduras, so we have to move on, ”Lucile continues. His plans never end and his goal does not disappear, no matter how difficult the path.

And he concludes: “So practically all the way and the stay in Mexico is to make plans for when they already earn money in the United States, what to do with that money.”

Central American migrants, expelled from the United States, wait at the border between Mexico and Guatemala in mid-2021. Photo: REUTERS

By sharing the lives of migrants with their children for several hours, one perceives the despair and depression of the parents, the sadness or anxiety of the minors who invade them, family uncertainty is permanent.

Day by day they have to hide, they cannot move and basically just sleep and eat, and if they are lucky they can watch TV or listen to music.

Linda Rivera, an expert psychologist in migrant children, explains what this can trigger: “They can become a more insecure person with low self-esteem, with difficulties adapting to their environment, with aggressiveness problems and with problems of low emotional intelligence because they have lost that level of relationship with other people. ”

Since July 2021, the US Department of Homeland Security resumed the “expedited deportation” of families.

As of November 22, 3,690 families have returned to Guatemala. From January to September 2021 there were 39,425 people. It was given an increase in unaccompanied migrant children 99.9% returned to Guatemala in the period from January to September 2021 (5,341) compared to the previous year (2,672) and is the highest figure in recent years, according to data from the International Organization for Migration (IOM).

Central American migrants cross the border between Mexico and Guatemala after being deported from the United States last August. Photo: REUTERS

Another family that lives in the west of the country is still planning their trip. Juan Hernández, 45, and his daughter intend to arrive in Florida.

“The minors go by bus or in carts, we do not travel together. Older and younger have separate coyotes and have different guides, but the one who directs everyone is the same ”, says Juan Hernández, who underlines the difficulty of the path undertaken. Despite this, they have long incorporated the fact of migrating into their views of life and the future.

Coyotaje, on the other hand, has operated illegally in Central America and Mexico for decades, but it has never been so persecuted as it is today.

For the coyote that RFI interviewed, it is a necessary evil: “Because this is not decent work, they think that one is profiting from the need and misery of other people. For me it is one more job because if I don’t do it, someone else will. So I prefer to do it myself, to earn this money myself before someone else earns it ”.

Crossing the border between Guatemala and Mexico through blind spots is a permanent risk.

They are populated with illicit businesses, arms, food, drugs and people trafficking.

The boys and their parents know it, but they say that, if they are lucky, they will meet a good coyote who will help them on the journey, but they will need a lot of luck when the violence of the mafias and the forces of security.

However, none of the travelers see the option of going back and resigning themselves to returning to their country of origin.