Chaos and violence in Kazakhstan. Almaty town hall attacked and set on fire 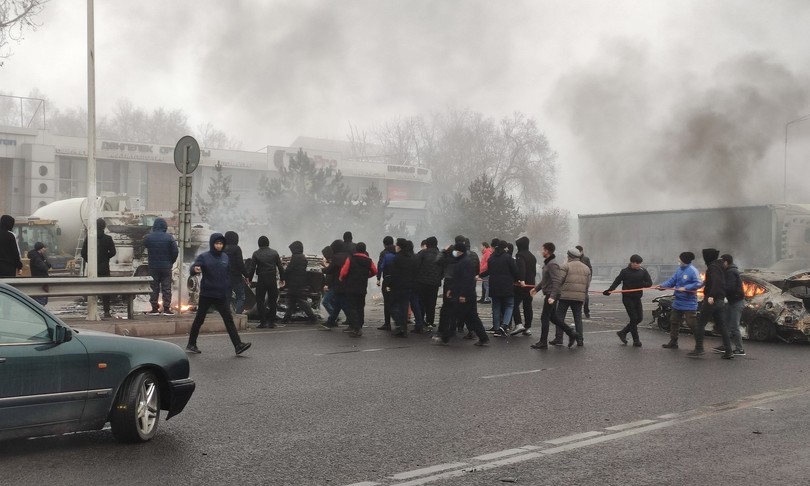 Protests in Kazakhstan against rising bills take on the shape of a violent revolt. In Almaty, the financial capital of Kazakhstan, the demonstrators have the Municipality building was attacked and set on fire.

In Aktobe, one of the cities where they erupted protests over the rise in gas prices, the demonstrators stormed the town hall and, finding no resistance from the police, who sided with them, managed to occupy it.

Almaty: burn the town hall. The protest took on the tones of a violent revolution pic.twitter.com/vwEY07XV4x

In the country it is in progress “a nationwide Internet blackout“, in the aftermath of inefficiencies recorded in mobile telephony and partial restrictions, according to the organization Netblocks, which monitors IT security and Internet governance.

“This is likely to severely limit the coverage of escalating anti-government protests” in the country, Netblocks warned.

A video posted by Russia Today shows a handful of protesters waving flags and congratulating in what appears to be the hall of the municipal assembly.

Clashes between protesters and police #In the morning # Kazakhstan.
classical_kz pic.twitter.com/qZIwJkqRfZ

The toll of violence in the country is around a hundred police officers injured, 200 people arrested and 37 damaged police cars.

The president of the Central Asian country, Kassym Jomart Tokayev, he fired the government after some unprecedented protests erupted in an oil-rich province due to rising gas prices. Tokayev also imposed a state of emergency in Almaty, the financial capital, and in the western province of Mangystau.

Huge crowds of protesters gathered next to the headquarters of the administration in Aktobe, #Kazakhstan and eventually TOOK IT OVER, as the unrest over gas price hikes shows no sign of abating.

In Almaty, protests continue: according to some witnesses, there have been explosions near two streets where demonstrators are building barricades. Law enforcement officers use stun grenades and tear gas.

According to the police, who fielded the National Guard and the army, there are “extremists” in action and that took over, beating up to 500 civilians. Even the president, Kassym-Jomart Tokayev, has played the “extremists” card, arguing that there are people manipulated by “foreign powers” who want to “blow up stability” in the country, the largest in Central Asia, and ” to shatter the unity “of the people.

The voice of Moscow

Moscow’s voice did not take long to make itself heard. “We are following the situation closely“the Russian Foreign Ministry said, adding that at the moment” there is no information of Russian citizens injured “in the riots. Russia and Kazakhstan have a deep historical link: the Central Asian country is a former Soviet republic.

Kazakhstan “has not asked for assistance” from Russia in connection with the massive protests underway in the country. The Kremlin spokesman, Dmitri Peskov said, warning that “it is important that no one interfere” in the current situation. “We are convinced that our friends from Kazakhstan can solve their internal problems independently,” added Peskov, quoted by the Ria Novosti agency.

How the chaos began

A statement posted on the presidential website this morning formalized Tokayev’s acceptance of the resignation of the cabinet led by Prime Minister Askar Mamin. The southeastern city of Almaty, the financial capital of Kazakhstan, has been in chaos since late Tuesday. The curfew will be in effect in both territories from 11pm to 7am local time, with restrictions on movement in and out of the cities that fall under the orders.

Tokayev had called for a return to calm in a video posted on Facebook by his press officer. “The government won’t be overthrown, but we don’t need conflict,” he said.

Protesters shouted “the old man out” – a reference to Tokayev’s still powerful predecessor and mentor, Nursultan Nazarbayev – and “the government resigns” before the police entered, sparking clashes with the protesters. In another move that seemed significant, Tokayev appointed a new deputy head of the National Security Committee to replace Samat Abish, a nephew of Nazarbayev.

The Telegram, Signal, and WhatsApp messaging apps were all unavailable in the Central Asian country, while two independent media websites that reported the protests appeared to be blocked. Smaller demonstrations have been staged in cities across the republic of 19 million since Sunday, starting with the city of Zhanaozen in Mangystau.

The initial cause of the riots was a rise in LPG prices in hydrocarbon-rich Mangystau, but a move by the government to lower prices in line with protesters’ demands failed to calm them down.. Independent media reports have suggested that Tokayev’s announcement of a new price of 50 tenge (11 cents) per liter, up from 120 at the start of the year, failed to weaken demonstrations in Zhanaozen and the Mangystau’s capital, Aktau, when protesters made new demands.

Footage from Aktau shared on social media on Tuesday showed thousands of protesters – who had camped in the city center overnight – surrounded by police. Most had dispersed from the city center by Wednesday, according to state broadcaster Khabar.

Mangystau is dependent on LPG as the main fuel for vehicles, and any jump in prices would have affected the price of food, which has seen steep increases since the start of the pandemic. At least 14 striking oil workers were killed in 2011 in Zhanaozen when police crushed a wage and working conditions protest, the deadliest agitation since the republic gained independence in 1991.

Tokayev took office in 2019, chosen as a successor by Nazarbayev, a close ally of Russian President Vladimir Putin. But Nazarbayev, who is 81 and has ruled Kazakhstan since 1989, retains control over the country as chairman of the Security Council and “Leader of the Nation,” a constitutional role that allows him unique policy-making privileges as well as immunity. from persecution. Spontaneous and unauthorized protests are illegal, despite a 2020 law that was passed loosening some restrictions on freedom of assembly in the authoritarian state.