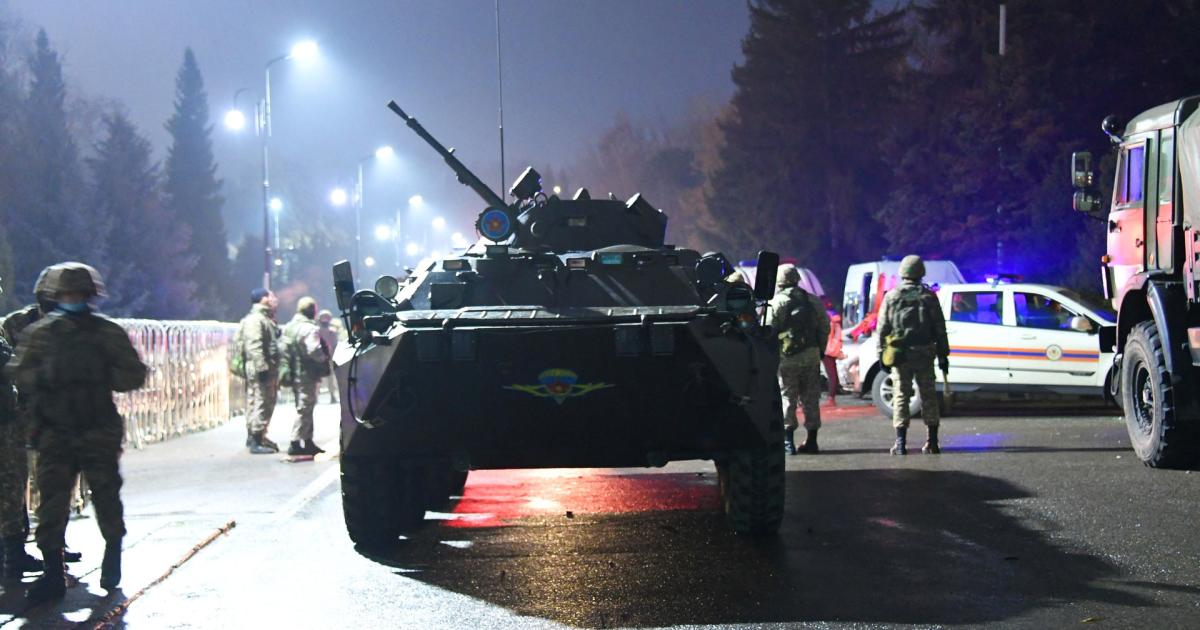 It’s the biggest wave of protests in years. The ex-Soviet republic with more than 18 million inhabitants is in a state of emergency.

Burning car wrecks at the roadside, no view for sheer smoke – the protests in Almaty, Kazakhstan, took on a new quality on Wednesday. Tanks came up. All over the country, people take to the streets, but nowhere is it as violent as in the economic metropolis of Almaty: In the city in the south-east of the country, demonstrators stormed the city administration, as the Tengrinews agency reported.

A video showed flames on the building and black smoke rising. Popping noises could be heard. Fires are also said to have broken out in the public prosecutor’s office and in the presidential residence. The situation was initially confusing. There have been reports of attempts to block the internet across the country.

Pictures from other parts of the city showed a large crowd running away from police officers. There, too, explosion noises and gunfire could be heard. The security forces reportedly used stun grenades and tear gas. You could see burned-out cars and destroyed windows from kiosks and restaurants.

There had been violent clashes between demonstrators and security forces the night before. According to the authorities, 190 people were injured, including 137 police officers. 40 people were taken to hospitals.

In the coastal city of Aktau, demonstrators stopped a military vehicle, arrested soldiers and confiscated their equipment:

Biggest wave of protests in years

The protest started at the weekend in the city of Shangaosen in the west and then expanded. It’s the biggest wave of protests in years. The ex-Soviet republic with more than 18 million inhabitants borders on Russia, China and in the southwest on the Caspian Sea.

The unrest was triggered by significantly higher prices for liquefied gas at filling stations. Many Kazakhs use liquefied petroleum gas because it is cheaper than gasoline. The government initially justified the high fuel bills with increased demand. Since the beginning of the year, gas trading has been carried out entirely on the energy exchange.

As a consequence of the protest, the authorities ordered price cuts. This should guarantee the “stability of the country,” said President Kassym-Shomart Tokayev. Many demonstrators were not satisfied with this and also called for the government to resign. Prime Minister Askar Mamin finally resigned from office on Wednesday morning. The presidential office announced that the government was also stepping down. The previous Vice-Prime Minister Älichan Smajylow takes over the official business temporarily.

Tokayev had initially tried to calm the heated mood with urgent appeals. “Don’t respond to calls to storm official buildings. It’s a crime, “said the head of state, who has been in office since 2019. After his election there had also been protests with hundreds of arrests.

He also imposed a state of emergency in some parts of the country until January 19, including in the capital Nur-Sultan, in Almaty and in the Mangystau region in western Kazakhstan. Associated with this are curfews during the night and ban on gatherings.

It was initially unclear when the situation would calm down again. Messenger services like Telegram and WhatsApp were reportedly not working. The authorities probably wanted to prevent more people from joining the protests.