With almost 200,000 daily cases, Italy is already analyzing vaccination for all those over 18 years of age 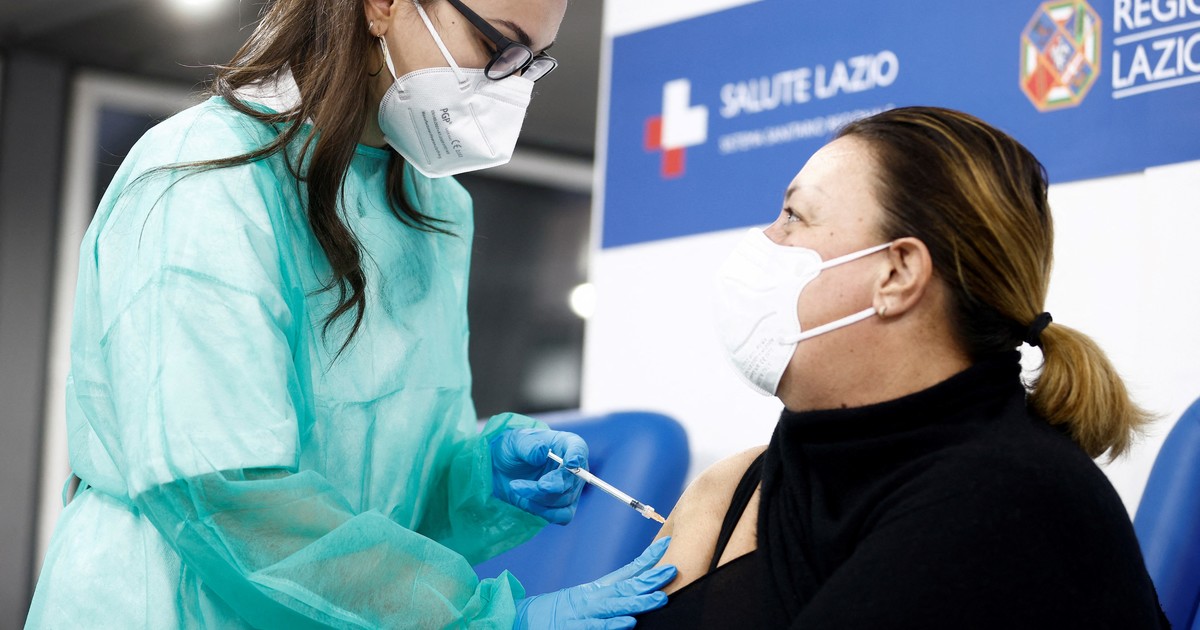 The 189 thousand cases, with 231 deaths, this Wednesday in Italy and the rate of spread of the coronavirus in Europe, with France that added 271 thousand infected on Tuesday and Great Britain 218 thousand, offer a generalized show of triumph of the pandemic in this fourth wave that has produced an unprecedented increase in infections since the plague that came from China began at the European level and was detected in February 2020.

The fight to contain the virus in its omicron variant is exasperated. But thanks to the barrier vaccine protection the proportion of hospitalized in ordinary areas and intensive care in hospitals is much lower than in the three previous waves.

Even fewer are the dead from this fourth wave compared to just a year ago, when the first vaccines were just lit.

Storm in the economy

But the social consequences are beginning to be felt heavily. The magnitude of the wave of infections makes Italian companies fear to attend the prolegomena of a perfect storm.

A direct consequence of omicron are the “Crazed contagions” that keep more and more workers at home.

There is also the commodity crisis, inflation at almost 4% per year and the stampede in energy prices, with an increase of 55% in electricity and 41.8% in gas.

A line in front of a pharmacy in Milan to be tested for coronavirus, this Wednesday. Photo: AFP

Many companies have started looking for replacement labor, but this is difficult if those infected at home are specialized dependents.

The labor unions and the very strong Confindustri, which groups together industrial entrepreneurs, together demand the a strong hand against those against vaccination, in the face of the threat that the economic recovery that looked very good until less than a month ago, when the wave letter, starring the omicron variant, broke in.

More than an additional 4.5% growth was expected this year to return to 2019 values, taking advantage of the privileged help that the EU provided to Italians with subsidies and loans of almost 200 billion euros in programs and aid from a vast Recovery plan. Now the future falters.

The Italian government met this Wednesday to analyze the mandatory vaccination against the coronavirus. Photo: EFE

Workers and employers support an even tougher Health Pass for the unvaccinated, extending the Obligation to be vaccinated.

But so far the two great Italian right-wing parties are opposed and also the populist Five Star Movement does not want to go that far.

The government has another letter up its sleeve: establishing the obligation to vaccinate everyone over 18 years of age.

Pietro Ferrari, son of the legendary Enzo and businessman leader, expressed concern “because from Monday we will have major production problems “.

At Ferrari, where the trend of infected people who do not go to work begins to feel like in other industries, the biggest problem is the difficulty in finding replacements who must have a high level of specialization.

“In some production lines, if more than two are missing, everything is blocked”, explains Pietro Ferrari.

In the industries of the south, the unvaccinated are few, but on the other hand, absences due to infections and home isolation are growing.

The businessmen of Puglia and Salerno defend the prohibition of working for those who resist vaccinations. “Employees have the right to work in a safe environment,” explains Sergio Fontana, from Confindustria de Puglia.

In the world of commerce, the main anguish is to observe the progressive desertification of the streets, mainly in the city centers, due to the general fear of contagion.

Customers are lacking, and supermarkets and other major businesses are running short of workers, forced to stay home by the unprecedented wave of infections that also immobilize relatives and family members who maintain close contact with those infected.

There are already more than 1.3 million who are confined to homes and it is believed that in a week they will be around two million.

Absences extend to public services. Tren Norte has a part of its 1,300 thousand dependents infected or in quarantine. More than a hundred regional trains in the north of the country have been canceled Tuesday and the outlook is pessimistic.

The same phenomenon, as in the rest of Europe and the world, is occurring in public transport in cities and on national and international flights.

The reality of tourism, which was bright at the beginning of December and complicated at the end of the year, is now disastrous.

One of the great lungs of the Italian economy, tourism, is hopelessly derailing in the face of the fourth wave of the omicron version of the plague.

The hospital system begins to vibrate but does not creak, it resists well. 20% of the beds are occupied by patients with Covid and despite the growth in less serious hospitalizations, which add up to 12,912, and those of intensive therapies, which reach 1,352 cases, the figures are less than half of a year ago , when there were many fewer infections and many more sick and dead.

The spread of vaccines, which in Italy reaches 86% of those over twelve years of age, and the slightest consequences of omicron infections, are the causes that are partly able to avoid the worst consequences of the plague.

Italian Prime Minister Mario Draghi is a supporter of tough measures against the unvaccinated. Photo: REUTERS

The fierce minority of those opposed to vaccination is in part already hospitalized because they lack the defenses of those inoculated with two and three doses that offer saving protection against omicron.

The no vacs they are the majority of patients in general wards and intensive care units.

But the real danger of the fourth wave is the size and speed of infections, with which some more pessimistic mathematical projections construct a scenario of 400 thousand infected daily.

This overwhelming prospect would compensate by saturation for the lower lethality of omicron with its contagion capacity.

The worst scenarios that are reported in the press indicate in the last part of the month no less than 3 million sick weekly, semi-dislodged hospitals and an economic system slowed down in the supply of goods and services.

The day this Wednesday was difficult in political circles. There were reports of clashes within the government regarding the measures to be taken to stop the wave of infections.

As the economist Mario Draghi is prime minister of a cabinet of ministers “above the parties”, all the center-left and center-right forces entered the government, with the exception of the right-wing Brothers of Italy, the only party chosen by the opposition.

The discrepancies they reflect differences in sensitivities and in calculations of attracting customers.

The center-left Democratic party and Forza Italia, led by Silvio Berlusconi, a conservative, agree that we must apply a heavy hand and force everyone to get vaccinated to drown the devastating force of the virus.

The other right-wing forces are opposed and the populist Five Star Movement does not seem willing to apply the total obligation of vaccinations.

What the schools will do

The discrepancies continue until school, a major issue in Italy.

Between the 7th and the 10th, classes resume after the end of the year holidays. The government has decided to reopen the classrooms, although a good part of the scientific world maintains that a total opening will bring the consequence of new waves of infections.

The nine million students range from the so-called nursery school, kindergartens, in which it will be enough that there is an infected person to close the class, to elementary schools, which will require two cases before sending the students home for the call Distance Didactics of lessons via the Internet.

Classes in secondary schools will work with up to three infected before entering quarantine or distance learning.

Among the two million infected who have avoided hospitals, an emergency system has been implemented to shorten quarantines because the requirement of hundreds of thousands of swabs to determine infections is creating a remarkable chaos.

Isolation will be minimal for those who have already received the three doses of vaccines or two less than four months ago, exempting them from quarantine.

The other vaccinated will have to do seven days and will be required to have cure swabs or quarantines of ten days that will be extended to 21 from the first symptoms if the swabs continue to give a positive result for Covid-19.