For Joe Biden, the assault on the Capitol was “an armed insurrection” 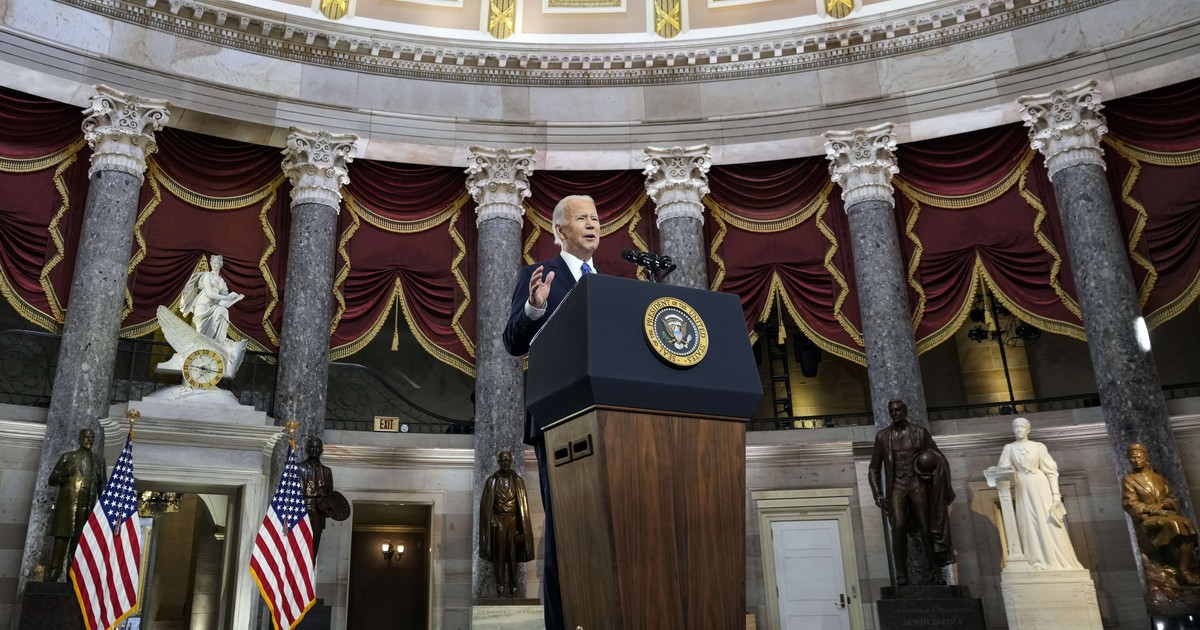 The president of the United States, Joe Biden, affirmed this Thursday that the assault on the Capitol on January 6, 2021 by the followers of the former president, Donald Trump, it was “an armed insurrection”, that democracy “managed to stay on its feet”, and that the tycoon “had failed” in his objectives.

“For the first time in our history, a president not only lost the elections; tried to prevent the peaceful transfer of power when a violent mob stormed the Capitol, “Biden said in a speech marking the first anniversary of the assault on Congress, an attack that left 5 dead and 140 officers wounded.

“It was not a group of tourists. It was an armed insurrection“, he emphasized.

The Vice President of the United States, Kamala Harris, also spoke regarding the first anniversary of the assault on the Capitol. Photo: AP

The president charged hard against Trump in his speech. “His wounded ego matters more to him than our democracy and our Constitution. Can’t accept that he lost“said Biden, who in turn accused his predecessor of spreading falsehoods about the election process.

“The former president of the United States has created and spread a web of lies about the 2020 elections (…) He did so because he values ​​power above principles, because puts his own interest before the interest of his country“, he lashed out.

In another part of his speech, the Democrat affirmed the United States and the rest of the world are waging a battle between democracy and authoritarianism.

“We live at a turning point in history, both at home and abroad. We are again embroiled in a struggle between democracy and autocracy; between the aspirations of the majority and the greed of a few“, He said.

It was a year since the assault on the Capitol by Trump supporters. Photo: AFP

“I will not allow anyone to put a dagger to the throat of democracy,” he warned.

The word of Kamala Harris

The vice president of the United States, Kamala Harris, also spoke, and affirmed this Thursday that the assault on the Capitol “reflects the fragility of democracy“.

“The violent assault that took place here, the mere fact of how closely the elections could be revoked, reflects the fragility of democracy,” said Harris, who was present on January 6 last year at the headquarters of the US Congress. .UU. Before and after the assault.

The vice president urged not to allow the future of the nation to be decided by those who want to silence the voices of Americans, revoke votes and spread lies and misinformation.

In that sense, accused “a radical faction”, which, he added, may have emerged recently, but whose roots are “deep and ancient.”

He indicated that “the extremists” who stormed the halls of the Capitol a year ago were not only targeting the lives of “elected leaders” at the polls.

“What they were looking for was not only to degrade and destroy a building (…), what they attacked were the institutions, the values, the ideals of generations of Americans “, said the vice president.

Donald Trump described this Thursday the speech of Joe Biden, who held him responsible for the attack on Congress on January 6, 2021, as “political theater” to make forget “the failure” of the Democratic president.

The president “used my name today to try to further divide America,” Trump said in a statement. “This political theater is only to distract from the fact that Biden has completely and totally failed,” he added.