Italy: Draghi media on the obligation of vaccination for over 50s 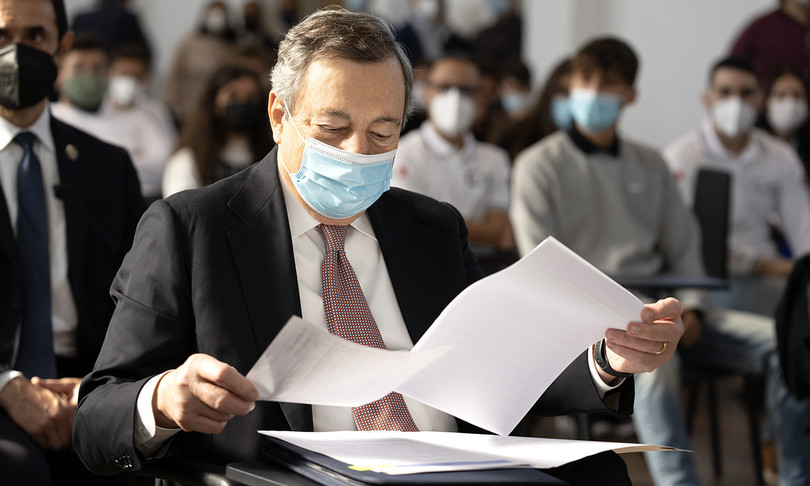 The Democratic Party and the Leu for the vaccination obligation for all, the 5-star Movement for none.

For a rigorous line also Forza Italia and Iv while the Lega, with a position agreed yesterday with the ‘governors’, for the vaccination obligation over 60 years.

In this climate, the proposal of the Prime Minister Mario Draghi to focus on compulsory vaccination over the age of 50. Position then illustrated by the executive to the Regions.

And so those over 50 will have to present the ‘2G’ certification (vaccinated or cured) at work, vaccination obligation for those who do not work, widening as much as possible the use of smart working and regular reopening of school activities: these are the decisions that have emerged so far before the Council of Ministers to be held at 5.30 pm.

But the fibrillations remain, because the 5-star Movement has confirmed the no to the obligation and the League said it was against the indiscriminate vaccination obligation, proposing to use scientific and not ideological criteria. With the assumption that the absolute majority of ICU admissions concern people over the age of 65.

Italia viva has strongly embraced the position of Prime Minister Draghi on the desire to go ahead with the vaccination drive and to support economic activities. The League has also reportedly asked for the government to take immediate action for a new refreshment decree. Forza Italia, Pd and Movimento 5 stelle are also on the same wavelength as to the need to help penalized companies.

The extension of the super green pass will also be extended to other activities, such as shopping malls. The green light should also arrive for the expansion of the vaccination passport to those who carry out work in contact with the public. That is, it will be necessary to present the green certificate to access services such as the Public Administration.

We must push on vaccines, but above all safeguard the weakest groups, Prime Minister Draghi’s reasoning during the control room. The objective therefore is to avoid overloading the hospital structures.

In addition to Prime Minister Draghi, the government’s control room on the new anti-Covid measures was attended by Minister Garavaglia for the League, for M5s the head of youth policies Dadone, for FI the Minister for Regional Affairs Gelmini and the Minister of Public Brunetta administration, for Leu the head of Health Speranza and for the Pd the minister Dario Franceschini. Also present were the head of the Economy Franco and the Bianchi School and the Undersecretary to the Presidency of the Garofoli Council.

Green light for the restart of the school but there is discussion on the regulation of the quarantine and above all whether to start Dad in high school on the third or fourth positive case. Pd, Leu and the 5-star Movement have asked for even stricter rules in the control room.

The “2 G” rule (vaccinated or cured), according to the model used in Austria and Germany, it will apply to shops, public offices, municipalities, provinces, regions, public services such as INPS and INAIL. This is the ‘scheme’ that emerged in the control room held on anti-Covid measures in the presence of Prime Minister Draghi.

In addition to the obligation of vaccination for the over 50s and the obligation for all for those who do not work, it was decided that you will need the super green pass to go to the bank, to the beautician or hairdresser and to the shopping center.

The position of the executive was communicated by the ministers Speranza and Gelmini to the presidents of the region.

Many ‘governors’, according to reports, have requested that the state supports their action on tampon expenses and pushed for more vaccines.

During the meeting, among others, the president of the Region, Campania De Luca, also intervened, asking for more stringent rules on the school, according to what is reported.

Now in the Council of Ministers Prime Minister Draghi will bring the measures discussed in the control room but the resistance of the 5-star Movement and also of the League remains to be overcome.

School, confrontation on the rules of Dad in the positive case

Reopening of schools confirmed by 10 January. At the moment it is debated whether to start Dad in high school on the third or fourth positive case.

This is what is learned during the ongoing meeting between the government and the regions on the new anti-Covid measures that will land in the Council of Ministers.