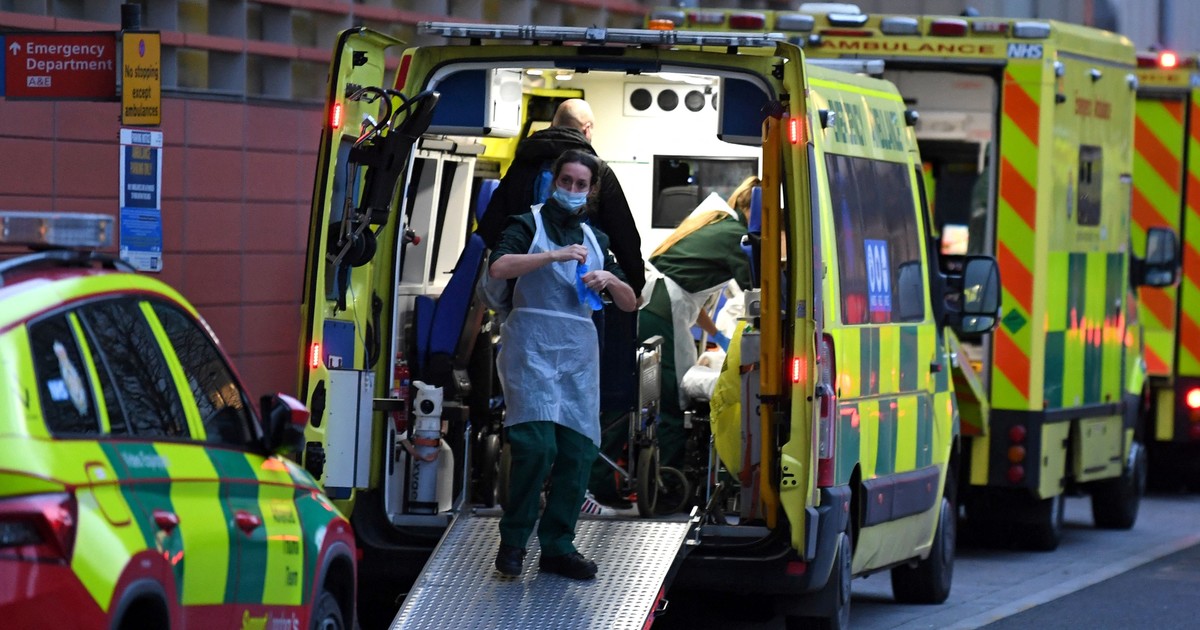 The army, its doctors and its soldiers They were deployed in London hospitals, given the shortage of personnel in the face of the advance of the Omicron variant and its infections.

Despite Prime Minister Boris Johnson maintaining that there was no shortage of health service personnel and more contracts were being signed, the army accepted the request to send its health personnel to help in the face of the number of infected doctors, nurses, orderlies and porters in the British capital.

The support, which includes 40 army medics, shows that lMinisters can no longer ignore the serious understaffing say union leaders.

The armed forces are being deployed to help hospitals in London deal with a surge in Covid patients because the Omicron variant is leaving many staff members sick and unable to work.

Of the 200 military personnel involved, 40 are doctors, who will help NHS staff take care of patients.

The other 160 staff members, who have no medical training, they will monitor patients, they will ensure that stocks are maintained and would also be “conducting basic checks,” the Defense Ministry said. Some have already started work and are expected to support the capital’s NHS until the end of the month.

The Norwest ambulance service announced that 150 soldiers will be supporting them from next week, under pressure from Omicron. Its director of operations Ged Blezar assured that the pressure takes months.

“We already worked with the military in February and March. This allows us to free our emergency ambulances to attend urgent cases, where life is threatened ”, explained Blezar.

Another figure is disturbing. Statistician Jamie Jenkins revealed that between 37 to 45 percent of patients in English hospitals are there not because of the virus but they have been infected.

Everything is overflowing in Britain but Downing St and Boris Johnson they refuse to apply greater restrictions.

At the morning briefing on Friday, the Downing St spokesman said that “the prime minister is clearly informed. Plan B is well balanced and continues to reduce contagion. But the important thing is the vaccination program and its effectiveness in curbing the virus, “he said.

“The military has helped in the pandemic and will help again. We know that absences are contributing to the current pressure they face on the NHS. We will continue to take steps to support them, “he said.

When asked if the presence of the army did not mean moving to Covid Alert 5, he said that “that decision was in the hands of Chief Medical Officer Sir Chris Whitty and his counterparts in Scotland, Wales and Northern Ireland.”

The absenteeism of the infected

The announcement comes two days after Boris Johnson said he hopes England can “beat” the current wave of Covid-19, without further restrictions. But he acknowledged that parts of the NHS (the health service) would be “temporarily overwhelmed” by Ómicron.

Union health leaders, while appreciative of the help, have said this latest move by the military means the government can no longer “dismiss” concerns about “providing safe care.”

Thousands of NHS employees have been out of work each week in London, which last month became the first part of the country to see a large wave of Covid cases caused by the new strain. This health tsunami leaves hospitals struggling to cope with unprecedented levels of staff shortages.

Chris Hopson, executive director of the NHS Providers hospital group, welcomed the assistance of staff from what are believed to be the three armed forces. But he said his arrival He underscored the magnitude of the NHS staffing shortage.

“Hospital leaders will appreciate the support of colleagues in the armed forces for what remains to be an incredibly challenging time for the NHS in London,” he said.

“The fact that we have to turn to army doctors and general service personnel underscores the magnitude of the workforce challenges facing the NHS,” he continued.

Hopson later went on to discuss the collapse of the public hospital and the problems that Brexit and immigration restrictions brought to recruitment “The experience of the pandemic clarifies the underlying problems that need resolution: the need for a long-term national plan to the health and care workforce, ongoing challenges with job openings and recruiting, dating back several years before the pandemic, “he said.

“Hospitals in other parts of England, which are seeing a dramatic increase in Covid admissions, may also seek military help,” Hopson added.

The news came as the UK reported a further 179,756 Covid cases on Thursday. The number of people infected with the Omicron variant continues to increase rapidly.

The latest figures, reflecting the infections detected by the tests, bring the UK’s total over the past seven days to 1,272,131, 29% more than the previous week. The actual number of infections is estimated to be substantially higher, as the test program does not capture all infections.

The data also showed that in England there are 17,988 Covid patients in hospital, up from 15,659 the day before, with another 231 deaths within 28 days of a positive Covid test reported in the UK on Thursday.

Military personnel have assisted in hospitals in previous waves of the pandemic and continue to assist ambulance services in Wales and Scotland. They have also been assisting the backup program.

The Royal College of Nursing said the deployment demonstrated that the NHS is critically understaffed. He asked for assurances that those involved have the skills to help care for patients.

“The government can no longer deny the personnel crisis in the NHS. The prime minister and others can no longer ignore questions about the ability of NHS staff to provide safe care, ”said Patricia Marquis, his director of nursing for England.

“Once the military has been brought in, where does the government go in an attempt to ‘ride out’ the wave rather than deal with it?” He asked.

“The nursing staff could appreciate any additional help at work at this time. But we must know that the government is not compromising the standards of patients and professionals in any way,” he warned.

Hopson previously said that rising infection rates in northern England mean that NHS hospital trusts expect to have 30% more Covid cases next week than at the last peak.

He fears that hospitals outside the capital may not be as capable of coping with the new wave of revenue as those in London. He said this was because they had deeper staffing problems, higher levels of illness and absenteeism, older populations and, in some cases, worse welfare provision.

Some hospital trusts outside of London have up to 19% of their staff absent due to Covid, far more than the 10% discount for illness or isolation that other NHS organizations have reported, he added.

In Wales and against the current

Welsh Prime Minister Mark Drakeford said the Omicron is the dominant variant in Wales and that cases they are much higher than in the first wave.

“We believe this will be shorter but it moves much faster. We have not yet reached the peak. We will have to wait another 14 days,” he announced.

He denounced that England has been transformed “by its policy against Covid into an isolated global case” and is “out of step” with other countries in the world.

“The outlier here is not Wales. Wales is taking action, like Scotland, Northern Ireland and countries throughout Europe and the rest of the world. The only country that is not taking action to protect its population is England ”he denounced.

“Throughout the world, governments are taking measures not only to deal with the consequences of Omicron but to mitigate them. At least 2,300 cases have been detected for every 100,000 people in Wales,” he explained.