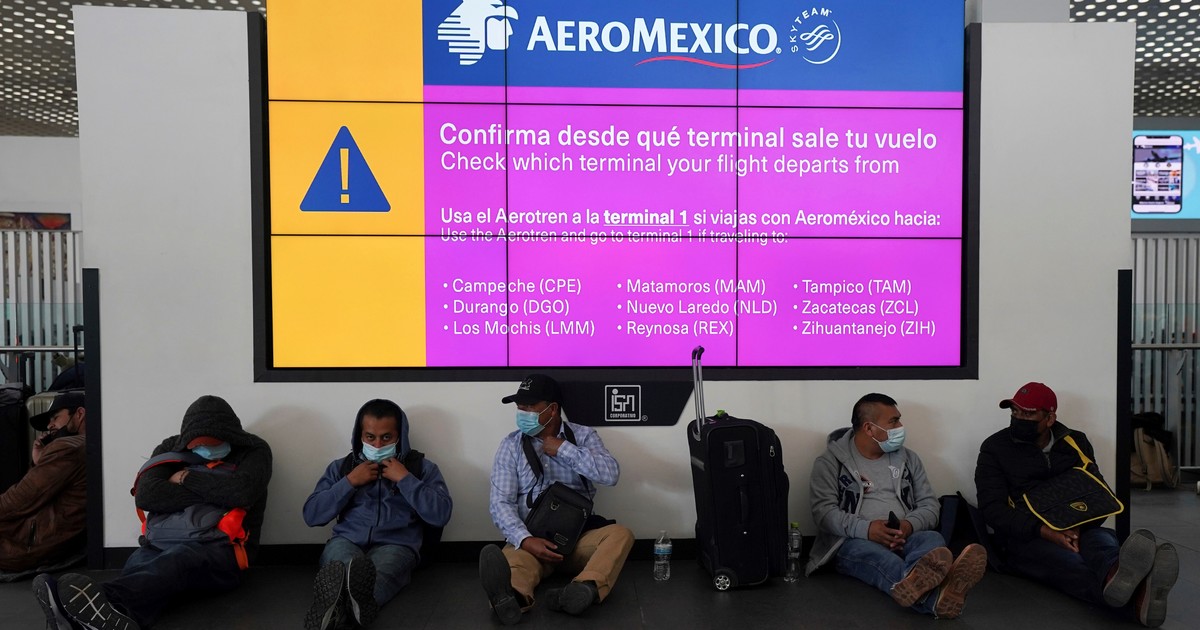 Dozens of passengers were stranded at the Mexican airport this Friday after at least 50 flights of the Aeroméxico company were suspended due to a coronavirus outbreak among the pilots.

This was reported by the Aviators’ Union Association (ASPA), from where they assured that there are already 75 drivers whose Covid-19 test came back positive.

In addition to these infections, as a result of the high circulation of the omicron variant in Mexico, which generated an increase in cases in recent days, there are another 65 company workers who are suspended “due to lack of valid flight documents.”

Due to the considerable reduction in personnel, the airline decided to suspend a large part of its flights scheduled for the beginning of this weekend.

Dozens of passengers were stranded at the airport due to the cancellations.

As reported by the Flightaware portal, this meant a 16% drop in all the trips planned for the day, among which there were some destined for the cities of Tijuana, Monterrey, Mexicali, Guadalajara, Mérida, Chihuahua, Puerto Vallarta, Cancun, Ciudad Juárez or Villahermosa.

The newspaper The country He added that there were also more than 10 routes that, although they were not canceled, were seen time-consuming.

A fact that generated several criticisms from users on social networks, who feared a possible suspension or delays of more than 24 hours.

In this regard, the airline acknowledged that there were “adjustments in planned operations.”

Some of the passengers stayed overnight at the airport because of the delays.

In a statement, they shared: “We are applying follow-up protocols to various collaborators, including crews, which has implied making adjustments to planned operations,” they said.

In addition, they added: “Flight delay or cancellation is not a decision we make lightly and is always the last resort”.

However, the last-minute resolution generated lines at the airport and several people staying the night.

In defense of the injured parties, the Federal Consumer Prosecutor’s Office (Profeco) demanded that airlines inform passengers of the changes “as far in advance as possible.”

He also suggested that they offer them alternatives, since, by law, they are obliged to offer travelers “a high level of information.”

While Flightaware warned of the suspension of Aeroméxico trips, it also warned about the cancellation of another 4,681 worldwide.

This is due to the strong advance of the omicron variant in different countries, which has hit airline staff and forced to cancel flights since the days before the end of the year holidays.

At Christmas, more than 2,200 flights, a quarter of them linked to the United States, were canceled by their respective companies due to the advance of the coronavirus, which in many cases affected air personnel who had to go into isolation and medical treatment.

Because of the omicron variant, flights are suspended worldwide.

Specifically, 2,272 flights had been suspended, and of them 585 linked to the United States – whether international or internal -, according to the Flightaware website.

The cause of the cancellation of the flights corresponded to the new wave of omicron, which mainly affected the crews, according to the airlines.

Two weeks away, the situation remains the same. And as they warned, it is likely that similar episodes will occur again until the end of February.